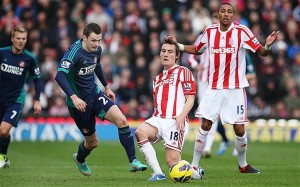 Martin O’Neill and plenty of Sunderland fans came away from the Britannia Stadium happy with another point in the bag. After all Stoke can be a difficult team to play and apart from last season’s snowy encounter, the Potteries hasn’t been a happy hunting ground for the Black Cats in recent times. Pete Sixsmith’s growing disillusionment with the Premier League has been well documented in his earlier match reports and there is little here to suggest that the feeling has been diluted. What follows is his cathartic therapy in an effort to forget…..

Never let it be said that this column does not do its homework. I suggested at half time that the game was little better than a Wear Valley Sunday League Division 2.

So, in the interests of professional journalism (unlike the execrable Lee Ryder who published all kinds of allegations against Sunderland fans in his laughable column in a certain Newcastle based “newspaper”), I did my research and, after a visit to the shops, I wandered down to Shildon Rec to see what was going on.

I came across a Wear Valley First Division game between two sides at opposite ends of the table and I have to say that I should retract my statement. It wasn’t very good, as the visitors added three times in the ten minutes I stood and watched, to the seven goals they had already notched up. As I left, they looked as if they were going to score again. I averted my eyes from the shambolic defending, but I had seen the visitors string a few passes together and inject some pace into their attack – not something I have seen a lot of from a Sunderland side this year.

So, the game on Saturday wasn’t quite as bad as I tried to make out, but it was a stinker – played between two teams who are struggling to find their identity at the moment.

From our point of view, we came away with a point, defended resolutely, worked hard and had a couple of half chances, which we failed to take. There were some signs of recovery, but they are as fragile as those currently being lauded by Messrs Cameron and Osborne, although they are more likely to materialise.

We now know that we have a very good goalkeeper who is not frightened by the nasty boys of Stoke who pepper his goal with deep centres and long throws, roared on by a fanatical and hostile crowd.
This is mainly because he has grown into his job and makes very good choices as to when to come and when to leave it to the usually excellent O’Shea and Cuellar. Plus, Stoke don’t really do that any more. Delap has disappeared and they have gone for a tricky winger in Kightley rather than fullbacks who sling the ball in to hard men like Fuller and big men like Jones.

The crowd has lost its edge, or maybe they reserve it for the annual visit of Le Professeur, Arsene Wenger, because that is the quietest I have ever heard a Britannia Stadium assembly. Maybe they are getting bored with the poor stuff that middle of the table Premier League teams serve up.
In truth, there is little to write about. Cattermole did well on his return, moving around quickly, organising everyone and going an entire 90 minutes without clattering into anyone or incurring the wrath of a hesitant Mark Halsey.

The back four looked solid, once Gardner had tightened up on his flank and Rose did well, although he too often rushes his final ball and gives it away. Colback was tidy in midfield as was Larsson, but once again, the two wingers, who O’Neill has put a lot of faith in, failed to deliver.
Johnson looks as if he is ploughing through treacle at times as he attempts to beat a man and then comes back inside. Is he fit? Is there a problem with him moving back to the North East? He must be close to being left out of the starting line up as Saha and McFadden look for opportunities to start games.

McClean worked hard but consistently failed to take advantage of some decent ball from Colback, failing to take on and beat some diligent Stoke defending. It is harder for him this year as teams are wise to him, but we have seen so few of those great crashing runs and a little too much of him cutting inside and losing the ball.

Up front, Fletcher plugged away and he may well have had a good penalty claim. I couldn’t be bothered to wait up for it on MOTD so I am not in a position to say. We’d probably have missed it – and who is our penalty taker? We don’t seem to get very many as we are rarely in the opposition’s box.

So, a real stinker. This mornings Observer report concentrated on what both managers had to say and had little to say about the game. This may well be a combination of the paper employing someone to sit and watch it on some obscure foreign channel rather than go (cheaper and better for the journalist’s mental health) and the fact that it was such a bloody awful game that there was hardly a noteworthy incident to write about.

I sat through it and so did 27,000 other hardy souls who must have thought as they made their way home that there were better ways to spend an afternoon than this. It was as far removed from the beautiful game as Conrad Black was from reality on Have I Got News For You, but a sight less entertaining.

We now go into a series of games against middle ranking teams like ourselves and a cup tie against local rivals who have found a bit of form, albeit in a lower division. Lose the next two games and there may well be grumbling of an Olympian nature as we have two tricky away games. We need to win the home games and with some conviction.

Let’s hope that we can shake off this lethargy and start to play football again.

STATS: Chelsea’s Lampard runs the most and Stoke’s Crouch hits the target

San Marino or Sunderland? Edging closer to the drop