Skip to content
Posted in Premier League By By Far The Greatest TeamPosted on September 9, 2014July 14, 2017 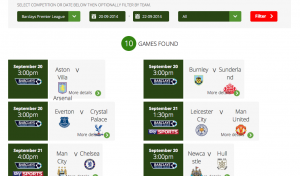 Whether you’re an armchair supporter or just love watching as much football as you can, it’s frustrating when you don’t know which game is on which channel and when.

For supporters of the likes of Manchester United, Arsenal, Chelsea, Manchester City and Liverpool, a Saturday match with a 3 o’clock kick-off is a rarity. However, more and more games are now effected by the increased demand to watch games live from home.

Is your team on the telly? Which channel? What time?