Skip to content
3 Comments on Where did it all go wrong with Liverpool loanee Sahin?Posted in Premier League, Transfers By By Far The Greatest TeamPosted on January 12, 2013January 12, 2013Tagged Liverpool, Nuri Sahin 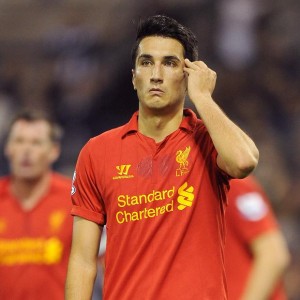 Nuri Sahin, who was the Bundesliga Player of the Year two seasons ago, joined Liverpool on a season-long loan in the summer. Arsenal had also been keen to sign him, after Arsene Wenger missed out on the Turk when he was still at Borussia Dortmund, but Liverpool offered to pay all of the 23-year-old’s £115,000 a week wages. Liverpool also paid a £5m fee and covered all relocation costs, whilst Arsenal were only prepared to pay £2m to take him on loan.

Sahin made his first appearance for Liverpool at the beginning of September in their 2-0 home defeat against Arsenal. Whilst he started for Liverpool in the cup competitions, he had to wait until the last weekend in September before playing again in the league, and was subbed off after an hour in a 5-2 win over Norwich. Sahin scored his only Premier League goal for the club in this game. He rarely played more than an hour in league games and never played 90 minutes.

The loan has been cut short, with Sahin returning to his former club instead of seeing out the season with Liverpool. “I am happy to be home again,” he told the Borussia Dortmund website yesterday.

So where did it all go wrong?

When Nuri Sahin left Spain for England, it was because Jose Mourinho said he would be happy to loan him out, not because the player had any ambition to move to the Premier League. In his ideal world, he would have been playing for Real Madrid this season, not Liverpool.

“Since I arrived here, it has been like living a dream,” Sahin told Fichajes at the end of June. “It is one of the best clubs in the world and for this reason I do not see why I should go. I have no intention of leaving.”

He had unrealistic expectations for Liverpool

Liverpool finished 8th in the Premier League last season, 37 points behind Manchester City and Manchester United. They did win a trophy though, the Carling Cup, after beating Championship side Cardiff on penalties, following a 2-2 draw after extra time. Sahin had expectations of Liverpool breaking in to the top four though. They are currently 8th, 21 points behind United.

He had unrealistic expectations for himself

Sahin went from playing 40 games a season for Borussia Dortmund to 10 games a season for Real Madrid. When he left Spain, one of the positives for him should have been greater playing time, which is what he was expecting. He claimed he turned down more money at other clubs to get playing time at Liverpool. It didn’t work out like that though.

“You don’t know me very well if you think I would go anywhere for money,” he said. “If it was about money, I wouldn’t be here. I had a lot of offers that would have allowed me to earn three times as much as I will earn here. The only reason I’m here is that I know I can play football here.”