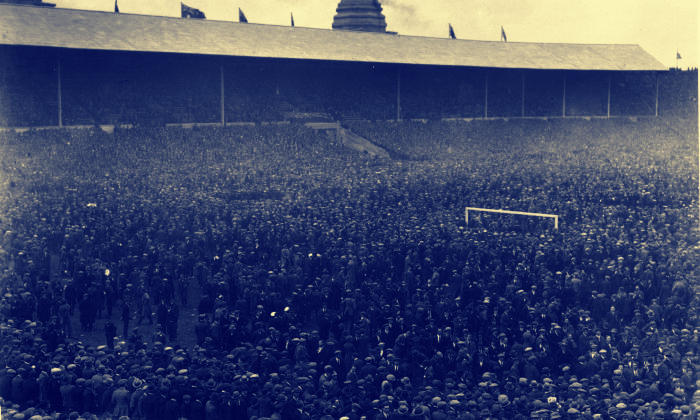 “Me and my dad walked of the train and up towards Wembley when we saw the masses of people. It was almost impossible to move forward and my dad didn’t take it so seriously that we didn’t have any tickets. He just said, “Let’s see if we can get into the game”. And then by the entrance, we saw people climbing over the turnstiles. So, dad said “Look, everybody’s going over the turnstiles. Let’s follow them”. The guards had locked the gates since the crowd pressure had been too hard. So, we climbed over and found ourselves inside the stadium.”

The First World War was over and the domestic football in England was well underway again. Some players had fallen in the War and some were so wounded that they couldn’t play football anymore. Since a year back, the Wembley Stadium was well underway to be built. It was built to host the British Empire Exhibition in 1924 – a tournament that was planned as far back as 1890. The Stadium was designed by the architects Sir John Simpson and Maxwell Ayrton.

In 1923, it was finally time to open up the gates and unveil this big stadium that was mentioned as the only one in its shape. The original attendance capacity was set to 127,000 people but the opening day would attract far more people than that. On 23rd of April 1923, it was time for the FA-cup final between Bolton Wanderers and West Ham United. It was going to be the first ever FA-cup final to be played at Wembley Stadium – something that would become a tradition.

The FA didn’t expect any big attendance number and could certainly not expect to fill the 127,000 seats. So, they went out and undertook a major advertising campaign and urged the supporters of London to come and watch some football at the new Stadium in the beautiful April-weather. The newspapers on the morning of the game wrote that they expected around five thousand Bolton supporters and at least 115,000 supporters from London and their suburbs.

The game was scheduled to take place at 3 pm and already at 11.30 am, the gates were planned to open. By 1.45 the decision was made that the Stadium was full and no more people would be let inside. But people ignored the closed turnstiles and climbed into the ground. Among them was Denis Higham and his father. It’s his story you could read about in the beginning of this text. His father was a devoted Bolton supporter since he came from Lancashire and Denis, well just say that he was happy if he would be able to see any football that day.

As the time moved closer to the kick-off, the masses of people were constantly pouring in. The organisation around the final was very poor and the people that worked around the event wasn’t prepared for something like this. At 2.15 the masses outside forced their way in and even though the local police station were mobilised, they couldn’t do anything about it. The people that stood in the lower part of the stadium had to climb the fences and rush onto the field to avoid being crushed. Another spectator, Terry Hickey was also in the stadium that day. He said this about the crazy situation that he and almost 300,000 more found themselves in. “To put it mildly, the whole thing was a bloody shamble”.

Well, that was indeed a mild version of the chaos that was now threatening the game to be postponed. One of the policemen that was at Wembley that day said this about the situation. “As my horse made his way onto the field, I saw nothing but a sea of heads. I thought; we can’t do it, it’s impossible to play this game”

This policeman was PC George Scorey and he would later be famous as the man who saved the game that April day – he and his horse Billie. Billie was, in fact, a grey horse but in contrast to all the people in their dark blazers, the horse looked very distinctive in its light colour. Scorey and his horse helped to clear the turf and when the crowd got a glance of King George V, who was there to hand out the medals afterwards, they started to help the authorities to clear the pitch.

“I happen to see an opening near one of the goals and the horse was very good – easing them back with his nose and tail until we got a goal-line cleared. I told them in front to join hands and heave and they went back step by step until we reached the line.”

Finally, the pitch was cleared and even though the crowd had to stand just behind the lines, the game was able to take place. So how was the game itself? Well, both teams played in the, typical for that time, 2-3-5 formation. In fact, England was one of those countries who kept this old-fashioned formation for a long time. Of course, the game itself didn’t progress without any disturbance.

Already in the second minute of the game, the West Ham half-back, Jack Tresadern disappeared into the crowd when he was going to take a throw-in and didn’t come back for a couple of minutes. West Ham had a gameplay of using their fast outside forwards Dick Richards and Jimmy Ruffell. But it was Bolton that took the lead in the second minute of the game through David Jack, who’s shot knocked a supporter unconscious since he stood close to the net.

After eleven minutes the game was stopped again after supporters had poured onto the pitch. The police cleared the field and some supporters needed health care from British Red Cross. When the game resumed it was Bolton who was the better team. Both teams couldn’t reach the dressing rooms at halftime since supporters were in the way. In the beginning of the second half Bolton scored the second and final goal of the day. Jack Smith scored the goal and while the game was moving to an end, some spectators started to walk home which made it a little more bearable for the police to control the situation. West Ham manager Charlie Paynter, a legendary manager not only for his impressively thick moustache, said his team had a disadvantage due to the big holes on the pitch. These holes were caused by the police horses that cleared the pitch before the game. 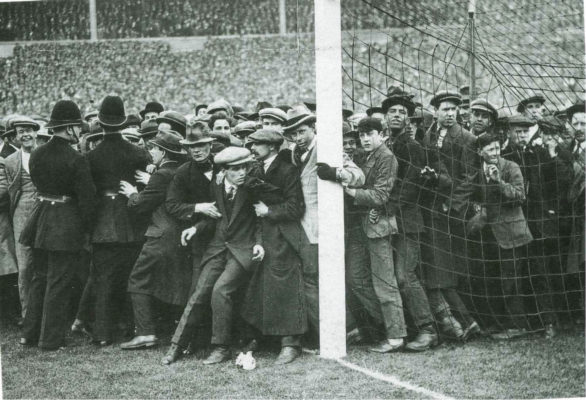 King George V presented the trophy and the medals to the winning side while the crowd were cheering them on. The aftermath of the game and the troubles that occurred in and around the stadium caused a debate in England. Some thought that even though the security had been bad, both the police and the majority of the supporters had behaved in a good way. But there were also people who called some of the supporters for hooligans and that the game should have been postponed. Some actions were being made to improve the security for the future and everyone agreed that things had to be made to make a more secure event for everyone.

But besides all this, the game was being played and a lot of people got to see high-class football. We might even have seen the biggest crowd in the history of football. And at the end of the day the most memorable moment about that day was the massive crowd and a white horse called Billie.