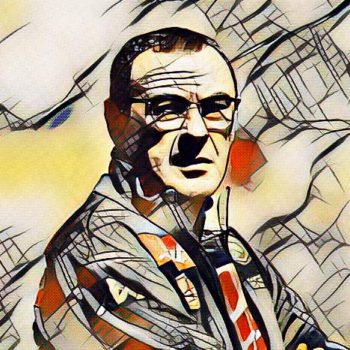 In the summer of 2015, Maurizio Sarri received a phone call from Napoli owner Aurelio De Laurentis, at first he thought he was the victim of a practical joke. By his own admission, it took Sarri a while before he realised that it really was the cinema tycoon on the other end of the line, asking him if he would accept the job of Napoli coach. Sarri’s moment of disbelief was understandable.

Can it be – he must have asked himself – that after 20 years as a bank clerk, 25 years as a coach to 17 different clubs and just one season in Serie A, can it be that he was about to land the Napoli job? Was a career, which began with amateur teams such as Stia, Faellese, Cavriglia and Antella about to move into the top-flight of Italian football?

Sarri, like Arrigo Sacchi, did not play professional football prior to coaching. When Sarri finally gave up his job as a bank employee in 1999, at the age of 40, he had already coached six amateur clubs. “For me the bank was a piece of paper, a safe job,” he told La Repubblica many years later. “I used to handle interbank currency exchange relations and I travelled all around Europe. But with the arrival of the Euro in 1999 there wasn’t much money to be made working in currency exchange.”

It is an understatement to suggest that the 59-year-old is one of those Italian coaches who have done ‘la gavetta’ [learned the ropes on the pitch]. The poetic aspect of his 25-year-long rise to the top is that it ended at home … Naples. Although he has lived the majority of his adult life in Tuscany – and even started his football career there – Sarri was born in Naples. His father was a crane driver who moved to the city to work in the Bay of Naples.

Growing up as a child in Figline outside Florence, Sarri used to be in a minority. While most of his friends supported Fiorentina – with others following Internazionale, Milan, or even Juventus – Sarri was a loyal Napoli fan. He recalls going to a Fiorentina match at home to Napoli and positioning himself among the away fans. So when the bank clerk ended up with the Napoli job, it really did seem too good to be true.

But De Laurentis had not just picked the name out of a hat. Like everyone else in Italian football, he had been much impressed by the quality of football played by the Sarri-coached Empoli side. With Empoli from 2012 to 2015, he had won promotion to Serie A with them in the 2014 season. While that in itself was good enough, it was the bright, positive football played by the newly promoted side that caught a lot of attention. Not only was the football attractive, it was also effective as Sarri’s side managed to stay up at the end of the 2014-15 season.

Many wondered, however, if the old dog could cut it at the very top, in charge of one of the big clubs of Italian football. It was only natural for some critics to wonder if, at the age of 56, the Napoli job had come too late. Would his bright attacking football survive the test at the very top? And there may still be those not entirely convinced by Sarri’s Napoli. Exiting the Champions League at the group-stages this season would suggest that, at the highest level, his team is still in need of a sense of stage presence.

At home in Italy, however, Napoli lack very little and currently lead the dance. It says all you need to know about the quality of Sarri’s team that, right now, Napoli are the only conceivable object standing between Juventus and a seventh consecutive Serie A title. Despite Juventus having a game in hand and Napoli suffering a 2-4 defeat at home to Roma last weekend, Napoli are a threat and Serie A knows it. For the past two seasons, Napoli have looked the only side that could make a fight of it against Juve. However, this season might even be one better. They have led the way for much of the campaign, playing an attractive style that has even resulted in Pep Guardiola stating that Sarri’s side is the best in Europe to watch.

The 4-3-3 set-up relies more on skill and technique than on muscle and brawn. The reliance is placed up the three “little ‘uns but good ‘uns”, with Dries Mertens flanked by Jose Callejon and Lorenzo Insigne. Faced with a lack of a central striker after the departure of Gonzalo Higuain to Juventus and last season’s early injury to Arkadi Milik, Sarri settled on the notion of Mertens as his centre-forward. His idea has certainly worked.

If Sarri’s Napoli have a limitation then it is a very non-Italian one. His side always go out to play and take the game to the opposition. There is no sitting back, no pragmatism, just attacking. Critics have suggested that Napoli’s style is both too predictable and too physically demanding. But when asked about this by Guerin Sportivo recently, Sarri said: “If I look at the mental and physical state of the team at the end of last season, I would say no.” “My football is both application and fun. And if you are having fun, it is less tiring. You must never extinguish the child that is in every footballer.”

If there is one accusation that critics are unlikely to ever level at Sarri it is that of being too politically correct. The thing is that Sarri sometimes seems like a coach from a different era. He likes to wear the old-fashioned tracksuit, rather than the club blazier, shirt and tie when he sits on the bench. It is more comfortable, he says, and anyway he is not a fashion model. He is an inveterate, heavy smoker who would probably smoke his way through a game if it were allowed.

Sarri expects his players to work hard and to train hard, and he is the first to admit that not every player finds this easy. He summed up his coaching philosophy neatly last year when telling La Repubblica: “I don’t consider myself the depository of truth but here you do what I say.”

However, Sarri is no dinosaur. He is always scribbling notes to himself on the touchline during games for two reasons. Firstly, he wants to focus on those ‘four things’ that he wants to say at half-time. Secondly, he likes to take note of the time that certain incidents, movements and mistakes took place. That way, it is much easier when it comes to editing his review of the game for post-mortem study purposes. Sarri is also a coach who has not hesitated in using a drone during training, while he reckons that during his average working day he could spend up to 13 hours on tactics, between coaching sessions, video sessions and reading.

Sarri’s future, rightly or wrongly, depends much upon this season. Where he to lead Napoli to a third Scudetto following the two won during the Maradona years – in 1987 and 1990 – he might well decide that the job is done and it was time to leave. Intriguingly, he has said that ‘after Napoli’, he could see himself working outside of Italy, in Spain or indeed in the Premier League. Of which there is little doubt, however, is that Sarri is one of the best Italian coaches of his generation and his Napoli side are a joy to watch.