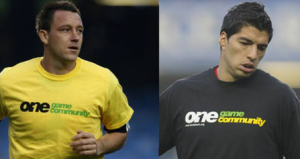 John Terry was today found guilty of “using abusive and/or insulting words and/or behaviour towards Ferdinand and which included a reference to colour and/or race contrary to FA Rule E3[2]” and banned for four games as well as handed a £220,000 fine.

The outcome of this case had been easily predicted since the Chief Magistrate’s summing up during the summer’s court case when Terry was found not guilty. It was deemed that Terry’s version of events were “unlikely” as the insult, ‘black cunt’, was “sandwiched between other undoubted insults”.

In the summing up for the prosecution, they reminded the chief magistrate that in his first interview with the FA, Terry claimed he said “you black cunt, you fucking knob head.” This story later changed to him repeating what Ferdinand said as a question (or sarcastically) as “a black cunt? You fucking knob head.”

Terry retired from International football this week, claiming the FA had made his position “untenable”. It was a strange accusation, considering the FA allowed him to go to Euro 2012 with a criminal case hanging over him, and the fact that Terry still opted to play for England after the charge. It appeared as though his decision followed the realisation that he was going to be found guilty.

It was an Independent Regulatory Commission that found Terry guilty though and he will miss Chelsea’s next four games against Arsenal, Norwich, Tottenham and Manchester United. If he appeals the decision, he would be available for some of these although would run the risk of extending his ban.

However, the decision to ban Terry for four games has left people wondering what was different with this case to that of Luis Suarez, who was banned for eight games on the same charge.

Suarez was deemed to have called Evra a “negro” several times, in comparison to Terry, who just said “black cunt” once. The FA explained Suarez’s longer ban at the time. “Given the number of times that Mr Suarez used the word ‘negro’, his conduct is significantly more serious than a one-off use of a racially offensive term and amounts to an aggravating factor.”