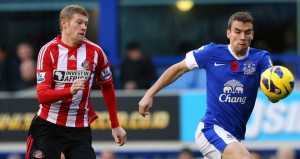 This year I have bought two poppies. One went straight into the lapel of my replica 1937 Sunderland top for the Aston Villa game. The second was purchased when I was realised it was still there (on the shirt, in a cupboard). One of them will be worn with special pride today.

Not everyone takes the same view. This weekend, there was been a row of the sort that is a logical extension of the authoritarian zeal that obliges television presenters and reporters to start wearing poppies absurdly early to avoid causing offence to retired brigadiers in Dorset.

Eyebrows have been raised, dismay expressed and insults levelled because James McClean would not wear the SAFC poppy top at Everton.

In the street, I pass people who do wear poppies and people who don’t. I have not seen a white poppy this year though this was a concept I, though not a complete pacifist, admired. It enabled people who oppose war to show they could still honour and respect the fallen, specifically from the First World War though Remembrance Day and the wearing of poppies have come to be seen more widely as a tribute to sacrifices made by British and allied service personnel in all conflicts.

Now, if McClean were the great grandson of a British soldier who had died in the 194-18 war, the grandson of one killed in the Second World War or the son of a dead or maimed serviceman/woman from Middle Eastern conflict, I would perhaps be surprised if he chose not to wear one. And it is certainly true that many Irishmen, from north and south, have served and fought in the British Armed Forces.

But I would still respect it as his absolute right, the very right of freedom of expression that is so frequently listed among the reasons we went to war against Hitler.

In fact, as everyone commenting on his choice should know, McClean is a young man from the Roman Catholic community of Londonderry/Derry, a product of the Creggan. I’d guess that the vast majority of those he grew up among regard themselves as Irish, not British, and have the right to travel on Irish passports. Mention the Army to them and their minds go instantly to what they know or have been told about Bloody Sunday, Jan 30 1972 – 17 years before McClean was born.

Under no circumstances am I a standard-bearer for the IRA, which carried out countless despicable, murderous and often very cowardly attacks on men, women and children throughout the Troubles and whose dissident elements broke away to continue their squalid campaign after a flawed peace emerged. There are arguments to be had over politics and the island of Ireland, and Britain’s role there, but this is not the place for them.

But Bloody Sunday was much more about the suppression of unarmed protest than countering terrorism. Fourteen civilians died.

It was not our finest hour. Even the essentially discredited Widgery Tribunal described the soldiers’ shooting as “bordering on the reckless”; the much later Saville Inquiry found that all of those shot were unarmed, their killings “unjustified and unjustifiable”. After the Saville report appeared, David Cameron made a formal apology on behalf of Britain.

Mistakes are made in all conflict. Men in uniform are sometimes badly led or required to enforce or act on bad political decisions. The use of troops in times of civil unrest is fraught with danger. But we should not be surprised that when innocent lives are destroyed, victimhood and bitterness prevail.

It is naive to be shocked when any Irish Catholic/nationalist chooses not to honour British military sacrifice. That naivety is all the more inexplicable when considering the case of a Catholic from Derry.

However, the freedoms we nominally hold so dear extend to the freedom to disagree – loudly – with McClean’s actions and every word I have written.

Plan B failed for Sunderland against Middlesbrough