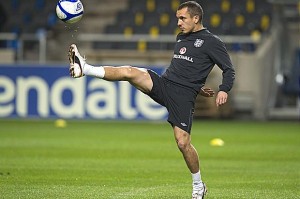 I’ve always quite admired Leon Osman. Never spectacular but always diligent, a real team player. And whenever I’ve heard him interviewed I always thought he seemed a decent bloke and reasonably articulate. When he has ever lost his place for a time at Everton, he has always just got his head down, never complained and just worked hard to ensure his manager picked him again. Yes, Leon Osman is a great example to his fellow professionals.

His call up to the England squad for the friendly against Sweden seems like just reward for a decade of consistent performance in the Premier League. And he seems like a player that, if he was still a club manager, Roy Hodgson would want in his team. In announcing the squad Hodgson said of Osman: “He’s a player that I’ve admired since I came back to Fulham five years ago. He’s always done extremely well whenever I’ve played or watched Everton. His performances have been really, really good. Of course, he’s faced great competition in the position that he plays, but on this occasion we’ve got the opportunity and the space to bring Leon into the team.”

So all these reasons seem sensible to call up Osman and give him his chance at international level. But Osman, a debutant at the age of 31, has the weight of history going against him in order to be a success. And the simple reason is this – modern footballers do not start successful international careers in their thirties. I’m not being ageist and I must stress, this is not about Osman’s ability. He has been widely praised by his fellow professionals for his call up and his quality in valuing possession of the ball has been cited as one of the reasons for his elevation. But at a time when Hodgson has been praised for his willingness to give young players a chance, a call up for a 31 year old is a backward step, if he truly wants to build for success at the 2014 World Cup.

We’ve been here before. An established Premier League footballer finally gets his chance in his thirties after seemingly accepting he will never get an opportunity at international level. None ended up establishing themselves in the team. Look at the likes of Steve Bould (2 caps), Tim Sherwood (3 caps) and our most recent 30+ debutant Kevin Davies (1 cap) for evidence. All solid and dependable Premier League players who arguably should have had their chance earlier in their careers. The same applies to Osman who has seen some much poorer players picked in front of him in the past.

But his time has passed, unfortunately. International football has shifted towards youth. Hodgson had the chance to have a closer look at other younger players in this friendly with the likes of Adam Lallana, Mark Noble and Jonny Howson available from an admittedly shallow pool. Promising but relatively untried alternatives include Nick Powell and Jake Livermore but maybe Hodgson thought his experimentation was already sufficient, although it didn’t stop Jonjo Shelvey getting the nod in his initial selection.

Of course players in their thirties can still have an impact on the world stage. You only had to see the midfield performances of Pirlo and Xavi in the summer to see they can still cut it. But you’re talking about exceptional players there, not decent ones. Germany’s last competitive squad in October contained only one player in his thirties, never mind one making his debut (and that was Miroslav Klose who has 67 goals in 126 matches so he also seems to be quite good at it). At Euro 2012 there were a total of two players who had made their debuts in their thirties and they were both third choice goalkeepers. In fact there hasn’t been an outfield player who has played in a major tournament since the 2006 World Cup – one for Angola and one for Tunisia, hardly potential tournament winners.

You have to go back to Euro 96 to find a tournament-winning player who made his international debut in his thirties. This was a man who helped break English hearts with the equalising goal in the semi final, followed by scoring in the penalty shoot out. He was never beaten in his 25 international matches, a record. If Leon Osman even makes it to five international matches it’ll be an achievement. But perhaps he’ll turn out to be as successful as the German, Kuntz.