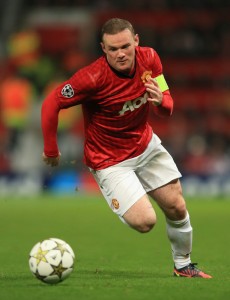 As much as you want it to, it’s not going away and it probably never will until A) Sir Alex Ferguson reads this to compound his own current thinking or B) well there is no B. ‘Why?’ you may ask, ‘Why is there no B?’ well as you can see from the cyclical articles and blog posts about a weak midfield that’s been going on for about 3 years now, you can see there is no other option but to understand better what is going on and that what you’re asking for, will probably never happen however much you would like it to.

Manchester United’s season, looking at it from the outside-in looks great. Top of the table in both of the leagues they’re playing in and scoring a plethora of goals. What has papered over the cracks is the weakness in the team to actually be the better team on the day or just to keep a clean sheet (3 in 16 games so far). Outscoring the opposition has now become the norm and it’s completely understandable when purchasing last season’s best striker in the league for what now looks like bargain money. When you consider that Jordan Henderson was £20m it’s completely compounded. Or, my favourite example, £35m Andy Carroll who still hasn’t scored and as they say, the rest is history.

The change in formation and the acquisition of Kagawa are probably the main factors here as well as a defence that doesn’t look at all confident. Regardless of the improvement now and it is somewhat settled, goals are still being conceded. This could be down to lack of communication or concentration but the midfield that precedes it does not instil the latter unless Scholes or Rooney are playing. That, unfortunately is the fact here.

Reading about Manchester United of late and their ‘over-reliance’ on Robin Van Persie doesn’t change anything at all. There isn’t a team on this planet that wouldn’t rely on such a clinical finisher. The problem here is not the ‘over-reliance’ on Van Persie but the option not to rely on a midfielder. Out of Carrick, Cleverley, Fletcher and Anderson it is pretty tough to think of them as the reason a game was won. The latter’s exerts in the League cup aside, it’s a mediocre foursome of players for a top of the table club; in England or in Europe.

There is no need to write about Scholes and his effect on the team or the fact there isn’t a new Scholes that a team could buy. This would be the reason Sir Alex Ferguson hasn’t gone out there and spent money on a replacement. This would be the reason he tried and failed to buy Eden Hazard. Or Lucas Moura who opted for the cash cow that is PSG. Instead he went for the number two on his list: Shinji Kagawa. These three are final third players who link play and score goals. There was no talk of players of the ilk of Daniele De Rossi or Arturo Vidal for example, players that command the midfield single-handedly.

Many called it a mistake to not buy the midfielder everyone wanted. Many others thought Kagawa would be the player to be the Scholes of old. The rest thought the reinforcements at hand would suffice. In a way, they’re all correct. Kagawa is a player that is easy on the eye, somewhat a Japanese David Silva. Interpret that how you like but he has the talent and he will find his feet after a lot more games. The problem here is that he wasn’t the world class signing that would move the club forward. Yet at the same time the problem was never a problem in the first place. The world class signing had already signed back in 2003.

Wayne Rooney’s potential as an all-round midfielder far outweighs his exploits as a striker thus far. Firstly for the need of Manchester United to possess that kind of midfield talent (more on that later) and secondly the ample and somewhat better strikers up front in Van Persie and Chicharito. Both better finishers with better movement and intelligence in and around the box. This could be down to nationality but it’s quite clear that Rooney should play behind these two players or one of the two.

Rooney’s first foray into midfield was to compensate for the talent that was Cristiano Ronaldo and at first the English media chastised the club for ‘wasting talent’ on the left wing. This slowly moved to acceptance and then on to praise for finding out how effective a move it was. You should also remember that Carlos Tevez was the final member of that triumvirate; a very capable player but also moved out of position so you can see that Rooney was not alone in adapting. This season you have seen that Rooney has become that missing midfielder with ease and no talent is being wasted here at all. It’s clear that it has only been beneficial as I’m not sure United would be sitting where they were for it not for his displays so far.

Everyone has seen Rooney’s passing range, vision and tenacity. Three qualities reserved for a player that isn’t a striker but a midfielder. When he completes a cross-field ball, which is above 90% of the time, you wonder why he hasn’t played in midfield for longer to hone his talents. His touch can be a bit hit and miss at times though thankfully it’s more often leaning towards the former. He has made more interceptions, touched the ball more which he himself has admitted is something he enjoys, made more tackles and just influenced games a player of his calibre should.

If this is only a temporary solution then it’s a round peg for a round hole and looking at it now, United are reaping the rewards. The younger members of the squad may well have a say too. Nick Powell being the stand out figure here as Cleverley is plainly not good enough. There was a moment against Arsenal where his first touch was so bad it looked like a pass. It’s moments like this that are slightly worrisome and his departure in that game was a benefit come the end of 90 minutes. Powell looks a better player and is 5 years younger. That is something to be excited about and his involvement in the first team plus his first call up to the Under 21’s can only be a good thing.

As much as this season has been a blessing to the midfield situation. It does still leave a lot to be decided with there not being someone to accompany Rooney’s talents there. The four players mentioned much earlier are not in that quality and a lot is left to be desired to show if they ever will be. It’s due to this that Rooney is dropping deeper and deeper to influence games and often make mistakes. This could be due to naivety in this role or his mentality as a player but either way he needs to hone his skills away from turning into a box-to-box midfielder.

The top teams in the world have Yaya Toure and David Silva, Ramires and Juan Mata, Busquets and Xavi, Alonso and Ozil. We just need to find the someone and Rooney.