Skip to content
1 Comment on Will Manchester United stump up the cash for Rodriguez?Posted in Premier League, Transfers By By Far The Greatest TeamPosted on November 16, 2012January 29, 2014Tagged James Rodriguez, Manchester United, Porto 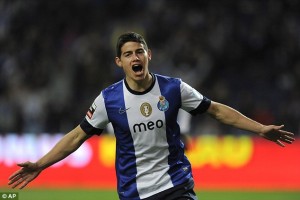 One of the questions swirling around Old Trafford at the moment is whether or not Nani will agree terms for a new contract with Manchester United.  Nani has made it known that he will need an increase in salary from £80,000-per-week to £120,000-per-week for him to stay.  The club were keen to sell him to Zenit St Petersburg in the summer but Nani demanded ridiculous wages in a bid to see the Russian club pull out of the deal, meaning he could stay in Manchester. Having still not agreed an extension with United, it looks like the club may be moving on and looking to replace Nani with Porto winger James Rodriguez.

Rodriguez has expressed an interest in joining Manchester United and now the only thing that seems to be getting in the way is the matter of money.  United reportedly offered £30m but this was rejected by Porto.

Ferguson learned that Rodriguez has negotiated a new deal with Porto and that deal saw a dramatic increase in his transfer valuation.  Now, it will take around £40m in order to get Rodriguez over to Old Trafford.  While that number may seem outrageous, it could well prove to be value for money for the young winger.  Last year, he scored 13 goals in 20 games to help lead his squad to the Portuguese championship.

Now the question remains whether Manchester United will fork over the additional cash to sign Rodriguez.  Whilst United can’t compete with the likes of Chelsea and Manchester City in the transfer market, David Gill has been working hard on bringing in plenty of new sponsorship deals. They recently landed a big name sponsor in bwin, a company that has been making huge investments in football for years. Bwin recently sold an online poker network and used some of that cash to sponsor United.  Maybe some of the cash from that deal could go to their transfer kitty.

Rodriguez’s agent Silviio Sandri recently told the media that the situation regarding the upcoming transfer period is “complex” and that they will continue to meet with Porto officials regarding Rodriguez’s future.

One thing is for certain, Manchester United is still scouting Rodriguez and has done so several times this year.  This likely means that another shot will be taken by the club to land the Porto winger.  Now it all comes down to whether Porto will come off their £40m demand or whether United will fork over the extra £10m.