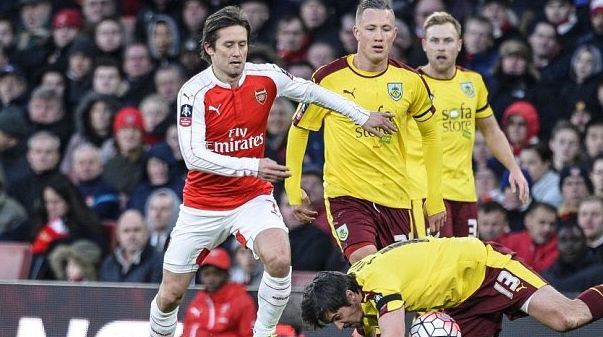 Arsenal manager Arsene Wenger has revealed midfielder Tomas Rosicky is facing another three months on the sideline with a partial rupture of a tendon. Latest reports suggest he will have to end his career after latest medical examination.

The 35-year-old midfielder picked up a fresh thigh injury just moments after coming off the bench for 09 minutes his debut of the season against Burnley last week.

The Frenchman has confirmed that the veteran midfielder has suffered a fresh problems setback but refused to confirm that the Czech Republic international had played his final game for the north London club.

Rosicky was kept out by knee injury until last weekend, and he is now out again. His contract with Arsenal is set to end in the summer, and there are speculations that the Gunners will be considering awarding him another contract.

Speaking at a news conference on Friday, Wenger said: “We lost Rosicky. We are all shocked, we hope it is not his last game. He will not need surgery.”

“Rosicky’s injury is quite a serious one. He will not need surgery. It is a partial rupture of his tendon. It could be two or three months.”

The Frenchman has confirmed that he has taken Rosicky’s latest injury seriously.

He added: “He’s devastated. Unbelievable. Nobody understands how he got injured. I told him straight away after half-time to warm-up.”

“He comes on, after three minutes he got the injury. I looked at him and thought ‘Tomas you do not run properly’ because he didn’t lift his legs and he lost some balls, I was amazed because he is top level technically.

“He told me after the game that he did it straight away, then I understood why that happened to him. He said ‘I stayed on because you couldn’t change anymore’. He warmed up well, for 20 minutes.”