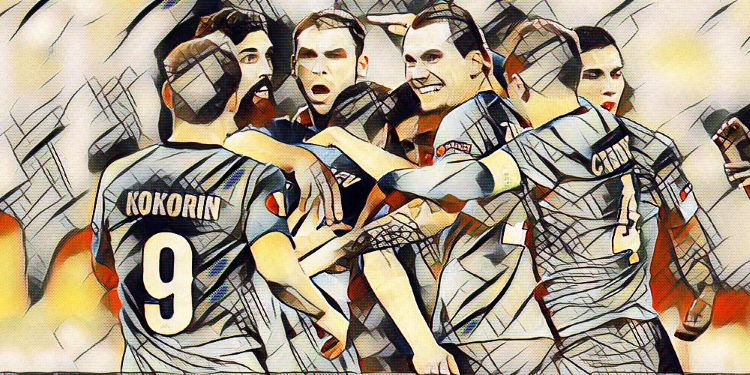 With the Europa League Round of 32 over, people can’t help but think about who are the favourites to win the competition. The upcoming fixture between AC Milan and Arsenal is widely seen as a game that could produce the tournament’s eventual winner, while Borussia Dortmund and Atletico Madrid have also been widely touted to lift the trophy in Lyon. However, one team who haven’t been spoken about very often in this regard is Zenit St Petersburg.

The Round of 16 will have a very strong line up, arguably one of the most prestigious in recent years, but Zenit should not be forgotten by any means. Roberto Mancini’s men have been unforgiving so far this campaign, finishing the group stages as the competition’s top scorers and getting the biggest points haul.

Athletic Bilbao’s Aritz Aduriz may be the top scorer in the competition, but Zenit pair Emiliano Rigoni and Aleksandr Kokorin are just one goal behind him with six each. On top of that, Zenit have Branislav Ivanovic, who already has a Europa League winners medal to his name and has bagged three goals and two assists from the defence in this Europa League campaign, showing that their goals can come from different sources.

There are many more quality players within their ranks, with the creative spark of Leandro Paredes in midfield, Domenico Criscito and Igor Smolnikov tearing up and down the wings from the full back positions and Emanuel Mammana at the heart of their defence. Admittedly these do not match the names such as Mesut Ozil and Antoine Griezmann who are possessed by Zenit’s Europa League opponents, but they do make up part of a very strong squad which should not be underestimated.

It is also a squad which has already had to come from behind in the knockout rounds. Having not played competitive football in around two months, Zenit had gone 1-0 down against Celtic in the first leg of their Round of 32 tie, at the hands of a very well taken half volley by Callum McGregor. In this match they were off the pace and didn’t look like being victorious, as their lack of games took its toll.

However, they came back emphatically in the second leg to win 3-0. A powerful header from Ivanovic had cancelled out the deficit, before Daler Kuzyayev struck from range and Kokorin stabbed the ball home to ensure Zenit’s progression. This turnaround once again showed their ruthlessness in front of goal and proved that they will be a force to be reckoned with, especially at the Krestovsky Stadium.

Zenit also have European pedigree outside of this campaign. In 2007/08 they lifted the UEFA Cup and then the UEFA Super Cup, with a squad including Pavel Pogrebnyak, Andrey Arshavin, Danny and Anatoliy Tymoshchuk.

Back to this season, the Russian outfit have RB Leipzig in the Round of 16, who have already made their way past Serie A leaders Napoli. This will be a challenge, but at this stage of the Europa League, in a year recognised for the strength of the sides in it, that is inevitable. The inclusion of the powerhouses such as AC Milan and Atletico Madrid has added some extra glamour to this year’s proceedings, however it is not a full blown certainty that these clubs will come out victorious come May.

There are many sides who don’t have quite the same reputation as these big guns, such as Lazio, Marseille and RB Salzburg who have shown they are a force to be reckoned with in the Europa League. However, it is arguably Zenit St Petersburg who tops the list of challengers who have their eyes firmly held on the Europa League trophy.