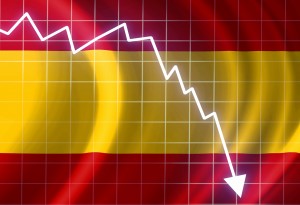 Don’t be fooled by the title; I’m not about to go through Spain’s fiscal issues. What I am going to talk about though is the current problems that are shielded from the average television viewer.

“The top division alone holds a combined debt of $4.61 billion through the 2010-11 season, with six of the teams in bankruptcy protection with payments due by June 30.”

You did read that right, four point six one billion dollars. That was last year and I’m sure, if there aren’t changes that by the end of this current season and with Spain’s downturn not willing to see an upside, this number will have increased closer to $5bn. Looking at current Spanish Government assessments, clubs from the top two divisions owe $988m in unpaid taxes and over the last four years, that’s nearly a $200m increase.

It may seem rosy in La Liga with viewers and pundits running out of superlatives but being rosy couldn’t be further from the truth. How apt the term ‘rose tinted goggles’ now seems. To put it into perspective, Real Madrid’s current debt stands at $773m, Barcelona’s at $756m and Valencia’s is $500m. When you speak of debt, you automatically think of Manchester United and contextually, their debt stands at $700m and that is something that is being serviced quite well considering. In terms of revenue, the top teams in Spain’s debts far eclipse revenue figures and when you’re touted as some of the richest sports teams (sports, not just football) on the planet, it seems the goggles are on pretty tight.

This whole matter is a double-edged sword in that the Government cannot expect these taxes to be paid straight away as it is impossible. Due to this teams will continue to delay tax payments and create a bigger all round debt figure. On the other hand, the Government can’t use the force they’re entitled to use as La Liga’s image is growing exponentially and with that comes an incredible amount of commercial value.

Spanish football as a whole is pleasing to anyone that wants an education in how the actual sport should be played. Even the feigning of injuries and incessant surrounding of referees adds to the theatre of it. Using empathy, imagine England’s economy was on the verge of needing a bailout and the only thing to take your mind off of a flagging economy was watching your favourite stars every weekend in the Premier League. What would you think if the Government then demanded most of the teams to put themselves into administration by demanding all debts to be paid within months. No Government wants to be the bad guy when football is such a healthy distraction and that’s the problem right now in Spain. Unemployment is rising and the Government are already hated amongst the masses with the current austerity measures being put in place. Football is what the people need to get away from what scares them.

Government threats are in place and teams in La Liga are beginning to fear them. Firstly due to UEFA’s Financial Fair Play system that is coming into force in the next few years and secondly from fear of not existing to even participate in FFP. In terms of ‘living within your means’ only Valencia, Atheltic Billbao and Osasuna would survive outside the top two teams according to a Financial and Economics Professor.

When discussions are taking place about how best to tackle the monetary problems within La Liga, all discussions always come down to TV rights. We are all very much aware of the favouritism involved when TV money is handed out and I’m not going to focus on that as that’s an exhausted subject. Using perspective again, the next team in line is Valencia. They receive $55m less than what Wigan get in the Premier League and this is a team that fights for relegation each season. Claims are made that La Liga is the best league in the world, but when you only pull in half of what the Premier League ($1.66bn) and two thirds of what Serie A ($1.198bn) make, it’s clear there’s something inherently wrong here.

I said before that clubs are beginning to take notice and that can be seen now the transfer window has closed. For the first time in decades, the total tax owed and what is owed to the social security system fell. The best example is the 65% decrease in summer spending by clubs. The largest transfers were Luka Modric to Real Madrid for €40m, Alex Song to Barcelona for €19m, after that Jordi Alba to the same club for €14m. Following those three there were no large expenditures. The stand out figure however is that clubs in Spain made €55m more from player sales than they did from strengthening their squads.

It is pleasing that clubs in Spain have finally seen the light in that they can only spend what they have invested or fear going bankrupt. Debts aside, this is a huge step in the right direction and I, for one, am glad they took the ‘better late than never’ approach.

How much does being in the CL cost fans?

How money in football has left us dreaming of mediocrity