Metropolitano, Madrid – “It was a good dinner for everyone because there was a great show” proclaimed Ernesto Valverde as he sat in the post-match press conference. “I said that we were going to adapt and we did adapt. I have a positive feeling from the game”. Barcelona and their opponents, Atletico Madrid, showed that big matches could live up to the billing. Despite players having to travel long distances and playing in highly pressurised matches whilst on international duty, Saturday evening in the Spanish capital showed that two heavyweights can go head-to-head, play attractive football and exhibit quality whilst trying to win the match. The ninety minutes at the Metropolitano were a delight rather than a disappointment.

It was the player who had travelled the furthest and played in the most pressurised of matches this past week that got the game off to a lively start – Leo Messi surged through the Atletico defence before narrowly placing his shot wide into the side netting of Oblak’s goal. It was the first of many chances for the Argentine – in the second-half, he hit one free-kick against the post and another straight at Oblak with the last kick of the game. However, there was an acceptance that Messi was slightly below par given his international exploits but Valverde was happy enough with his contribution, “It’s true that Leo had some wear and tear but he gave us a lot of effort and it was clear when he got the ball, something good could happen for us.”

Atletico quickly regained their composure and Antoine Griezmann forced ter Stegen into two quick reflex saves within the opening ten minutes. The tempo was set, the Spanish flags were being waved, and the quality was high. The home crowd urged their team on and the deadlock was broken in the 20th minute when Saul curled the ball into the bottom-right corner from just outside the box. Barcelona’s resolve was broken and for the first time this season they were up against it – trying to take a lead away from Atletico is never easy.

The Blaugrana did respond brightly though and almost found an equaliser through Luis Suarez five minutes from half-time, but Stefan Savic – who had a noteworthy performance at the heart of Atletico’s defence – stepped in to make a crucial block and prevent his goalbound effort from hitting the back of the net. After the break, the Barcelona pressure did not relent with Messi striking a free-kick against the post before firing wide a left-footed attempt.

The search for the equaliser continued – the Atletico defence stood strong, the crowd cheered them on. However, Barcelona did manage to find the goal they were looking for in the 82nd minute as substitute Sergi Roberto whipped a fine cross to the far post which Luis Suarez headed powerfully into the net. The Metropolitano fell silent – there were no away fans present due to ‘logistical problems’ – but the home crowd realised it was now a case of preventing the Catalans from clinching the win.

The last ten minutes saw chances for both sides but the game didn’t see another goal and the deserved score-line of one apiece was confirmed. The amount of possession and the number of chances tilted the way of Barcelona but both sides had put in a good display. Arguably the biggest match of the weekend in Europe had lived up to the hype and fans were treated to an evening of high quality, entertaining football.

Las Palmas – Celta Vigo to be played on Monday 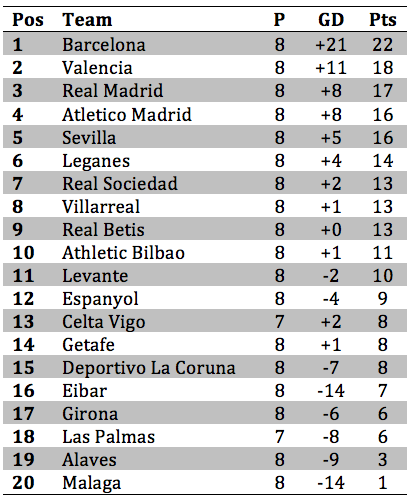