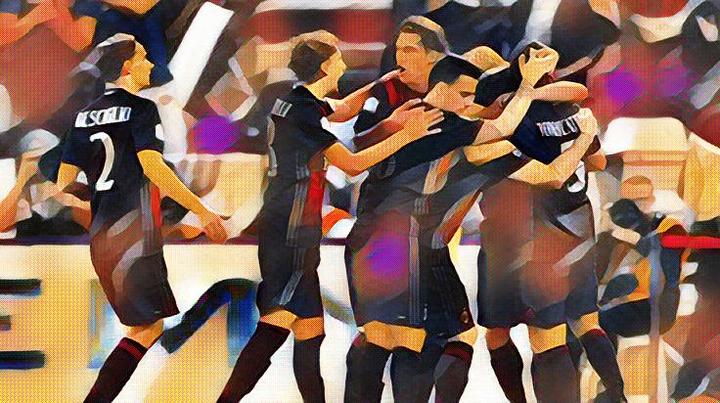 A 3-2 win over unknown Croatian outfit HNK Rijeka in their latest Europa League Group game thanks to a 94th-minute winner; not the AC Milan of old, but certainly their spirit proves just how far this side have come since their dramatic fall from not so long ago. This latest victory – their second in as many games in the somewhat unflattering Europa League Group D – epitomised the AC Milan of late; showing signs of a comeback to the glory days yet just not quite there yet.

A Serie A winner as a Roma player in 2000/01, Manager Vincenzo Montella has instilled a sense of ambition in this new era for AC Milan, symbolised by his words after their latest European victory: “I see the glass half-full. We learned some valuable lessons and we won.” Beginning his managerial career as Roma’s caretaker manager in 2011, he then moved on to Catania, before leading Fiorentina to three consecutive fourth-place league finishes, a Coppa Italia final and a Europa League semi-final during three seasons at the club. After a short stint in Sampdoria, Montella moved to Milan to guide AC to a fine Supercoppa Italiana victory over Juventus, helping the Rossoneri to their first title since 2011. The Italian may not have the reputation and persona of former managers such as Fabio Capello and Carlo Ancelotti, yet he has certainly steadied a quickly sinking ship, where, incredibly, five managers – including former players Clarence Seedorf and Filippo Inzaghi – in just two years have tried and failed.

Yet the most exciting aspect of this new adventure is undoubtedly the players, and in particular those who have only recently joined this unique and historic football club. Where else to begin with than defensive stalwart Leonardo Bonucci – strongly regarded as one of the best in the business – who shocked the footballing world when he left champions and bitter rivals Juventus to join the Rossoneri for £35m, and absolute steal given the soaring prices in modern football. Following in the footsteps of hero Alessandro Nesta, Bonucci has already proved his loyalty to the Milan faithful with some crucial performances at the back.

In an extremely busy summer for the ever-growing outfit, Milan also brought in several players to cement this new-look defence to build around Bonucci, namely Argentine Mateo Musacchio, Italian Andrea Conti and Swiss full-back Ricardo Rodriguez. Further up the field and fans have yet more reason for excitement, with Turkish playmaker Hakan Çalhanoğlu one of their star signings of the summer, along with Lucas Biglia from Italian rivals Lazio.

Look up front however and AC Milan have unearthed a gem in Portuguese star Andre Silva, joining from Porto for a large sum of the £175m the Italian side spent during an important summer transfer window for the future of the club. In a trivial yet simultaneously significant milestone for the Rossoneri, Silva became the first AC player to score a hat-trick in Europe since Kaka in 2006 when he bagged a treble against Austria Wien in their first group game of the season.

Their youthful contingent also brings with it a sense of anticipation, with on-loan Ivorian Franck Kessié, wonderkid Patrick Cutrone and immensely talented goalkeeper Gianluigi Donnarumma – at just 18-years-old – leading the line in this hugely promising aspect to their squad, while also getting the best from former Liverpool youngster Suso, while the more-experienced Fabio Borini and Nikola Kalinic have also found a suitable platform to rebuild their once-promising careers. Both Donnarumo and Suso have committed their long term futures to the club, while manager Montella is similarly signed up for the long run, highlighting just how content the powers that be are at this gradual climb towards the top.

As – painstakingly for AC – bitter rivals Inter Milan are well on their way to recovery through the heroic efforts of captain Mauro Icardi, AC are still some way off the pace. Despite his intense hatred from many of the Inter faithful, Icardi’s six league goals have fired Inter to third place, who are yet to lose in their six league games, while AC sit three points behind them in sixth, with four wins and two losses – a 4-1 drubbing at Lazio and a disappointing 2-0 loss at Sampdoria. Their perfect start to life in the 2017/18 season – where they won their first six games in the Europa League qualifiers and Serie A – typifies their quality; capable of defeating countless opponents yet struggling to overcome some of their main competitors out there. Their next two fixtures? A home test with Roma followed by the Derby della Madonnina after the international break…

A club that has a history richer than most; a club that has retired the numbers of two of its greatest ever sons in Paolo Maldini and Franco Baresi; a club housing 80,018 passionate fans week-in week-out; a club that needs to return to the top of Italian football.

Football fans around the world need not reminded that AC Milan are no normal team. One of the wealthiest clubs in Italian and indeed world football, the Rossoneri boast an incomparable honours list, and so perhaps it won’t be long until we see the rise of one of sport’s greatest falls from grace. Several Italian football clubs are now challenging the patriarchy that is Juventus domestic domination; namely Napoli, Roma, and begrudgingly, Inter. While AC are still some way off this prestigious list, the future looks bright for a club that has dabbled in despair for far too long now.