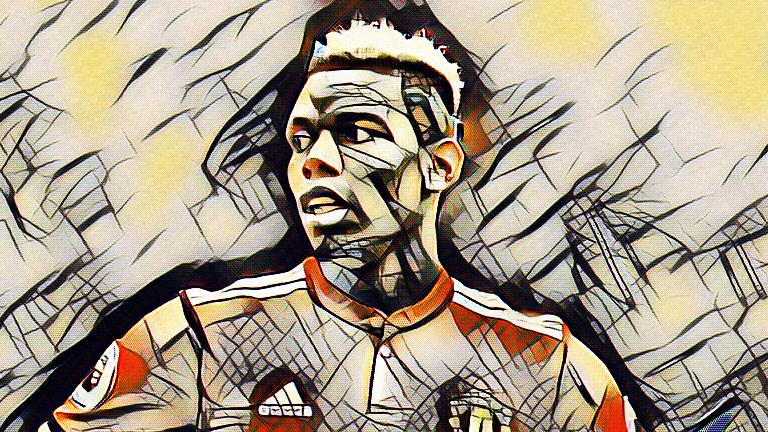 Paul Labile Pogba was born 15th March 1993 as a result of a pre-conceived plan by his refugee parents to gain permanent settlement in France. Mother Yeo and Farther Fassou Antoine were part of the mass migration to France, refugees of civil unrest in Guinea. They were advised before landing in France that if Yeo were to fall pregnant, the French authorities would not send them back Guinea.

Shortly after arriving in France, Yeo would fall pregnant and permanent residence was granted to her and Fassou, although the pairs twin boys would have to return to Guinea and apply for citizenship through the normal channels. Florentin and Mathius would be reunited with their parents almost two years later, meeting their French-born brother for the first time. Yeo and Fassou couldn’t be two more different people, Fassou was a calming presence and humble. Whilst Yeo was exuberant and confident, can’t imagine who Pogba takes after more.

Yeo was determined that her boys did not go on to live a life of poverty and hardship and disciplined them into choosing a path, perfecting it and becoming what they desired the most. All three boys stated unequivocally that they wanted to become professional footballers, whilst Fassou sneered, Yeo would push and be supportive of the boys’ dream. Paul Pogba journey to the top is well documented, but you might not have known that both Florentin and Mathius also made it into the professional game, playing for Saint Etienne and Sparta Rotterdam respectively, they also represent Guinea on the international stage.

Aged 13 Paul Pogba would enter Le Havre Academy after spending seven years at local side US Roissy-en-Brie, intersected by a year as captain of US Torcy u13’s.

Pogba impact upon arrival at the academy was instant, it was very clear Le Havre had unearthed a future star. Paul would be promoted to the u16’s shortly after and would play a pivotal role in the youth teams success in a national tournament, finishing second to Lens in Le Championnat National des 16 ans. Pogba would be made the captain of the u16s and Europes top clubs were put on notice.

Manchester United would win the race to sign Paul Pogba aged 16, albeit under controversial circumstances. Le Havre claimed United tapped up Pogba and his family, offering cash, cars and a house to Yeo and Fassou, a claim United denied. Going as far to sue Le Havre for libel and settling the dispute out of court, agreeing to transfer terms that would include a percentage of profit of future sale deal. United was cleared of any wrongdoing by FIFA, incidentally, Le Havre was themselves accused of an inappropriate approach for Pogba, by US Torcy, Le Havre was also cleared of any wrongdoing.

Pogba’s protracted transfer would finally be ratified by the FA on 7th October 2009, once verified Paul would sign Scholarship papers and enter United’s academy to further develop his talents.

Pogba would make his academy debut three days later for the u18’s vs Crewe Alexander in a 2-1 defeat. United would end the u18 season with a 5-3 playoff defeat to Arsenal, Pogba would make 21 appearances, scoring 7 times.

The 2010/11 season would offer much the same for Pogba, regular appearances for the u18s and the odd promotion to the reserves, and first team for FA Cup games. Pogba and the United u18’s would put together a run in the FA Youth Cup and be crowned eventual winners.

Pogba third season with United would see him permanently promoted to the reserves and again would appear for the first team on occasion in cup games, Leeds United and Aldershot Town in the League Cup and Bilbao in the Europa League. Sir Alex stated “that these opportunities were necessary, if you hold a player of Pauls qualities back, you’ll lose him”

Those words would come back to haunt Sir Alex, because, despite several substitute appearances, Pogba felt that he was not getting the right amount of game time to show what he could really offer a senior side that was clearly struggling.

United would call upon another Paul to prop up their Midfield, Paul Scholes. Scholes had retired at the end of the 2010/11 season and instead of putting faith in Pogba, Sir Alex opted for Scholes. Pogba felt like it was a slap in the face and come the end of the 2011/2012 season, he would refuse his first professional contract at United in favour of a move to Turin with Juventus.

Pogba’s move to Juve couldn’t have been more successful. He’d drop straight into the senior squad and played his first full 90 minutes just five weeks after signing against Chievo, a Champions League appearance vs Shakhtar a few days later. Back to back man of the matches would follow, firmly establishing a 20-year-old Pogba as a world beater and Juve’s new star man. Pogba would clinch his first senior title in his first professional year, he’d also be named European Golden Boy 2013, essentially the Ballon d’Or for players under the age of 21.

He would also experience some international success also, winning the 2013 u20 World Cup with France and being named best young player at the 2014 World Cup in Brazil.

As an individual, Pogba would be named in both the UEFA and FIFA World XI’s, place 10th overall in UEFA Best European Player 2015 and 5th in the FIFA Ballon d’Or voting.

The summer of 2016 brought with it a shocking transfer, Pogba was returning to Manchester United, at a price of £89m. It would surpass Gareth Bales world record fee in his move between Spurs and Real Madrid and again place Pogba amongst the worlds greatest talents.

Paul Pogba would bring with him a certain flair and style many of his peers would not be able to replicate, appearing in Music videos and seeping into other corners of pop culture, Pogba had become more than just a Footballer, he’d become a 24-year-old icon.

It would be his lifestyle choices that would come under fire when Pogba failed to reproduce his scintillating Juve form. Perhaps extracurricular activities did play a part, but it’s my belief that Mourinho negative tactics are shackling Pogba best attributes.

The slow start would be interspersed with the odd goal and flash of brilliance, but the overall consistency had gone. Playing a deeper role alongside Matic, Pogba is incapable of affecting the game in the final third like he used too so often for Juve.

This is backed up also by the loss of form of Lukaku, who scored goals for fun at Everton, Sanchez to doesn’t look the same player since arriving at Old Trafford and Mourinho has a chequered history with shackling other players too. Kevin De Bruyne, Mo Salah, Andre Schurrle and Tiago Mendes to name a few have all gone on to have stellar careers after moving on from Mourinho. That’s not to suggest that Jose is a bad manager, he’s won the titles to prove otherwise. It’s just his negative style of play rarely affords the attacking talents in his team many opportunities to play their natural game.

Pogba first season back would see silverware awarded in the form of The Europa League and League Cup, but the criticism of his inconsistency was slow to subside.

This year Pogba has again been central to United’s successes, but in a year where City and Liverpool have shown that free-flowing attack wins games, United and Mourinho again have been criticised for negative tactics and inability to beat the big six teams.

Pogba may have scored a brace to ruin City’s title party this past weekend, but go back and look at the game and you’ll see two very different set of tactics in the first and second halves, proving the rule that when given the freedom to play to their strengths, United and Pogba are capable of picking teams apart.

Can Paul Pogba be crowned worlds best player? In a word yes, I believe he can be. Often whilst writing these articles, there has been a will he won’t he element, I’ve balanced the facts and produced a conclusion. In this case the facts are Pogba offers something very special to the teams that allow him the freedom to do so. Powerful, fleet-footed and always plays with his teammates in mind. Look at the way he played for Juventus and continues to make Frances Midfield tick too, that’s the Pogba that will be a major contender for the Ballon d’Or in years to come.

There is just one thing holding him back, which is ironic seeing as being held back was the reason he left United in the first place and it’s his manager. If Pogba is to be successful in being named The Worlds Best Player, he’ll need to be free to contribute in a manner that suits his attributes best. At this moment in time that doesn’t look set to be the case, unless this past weekend proved to Mourinho that to get the best out of Pogba, he needs to remove the chains.

What do you think? is Pogba the contender I think he is or just a very good player with too much attention.