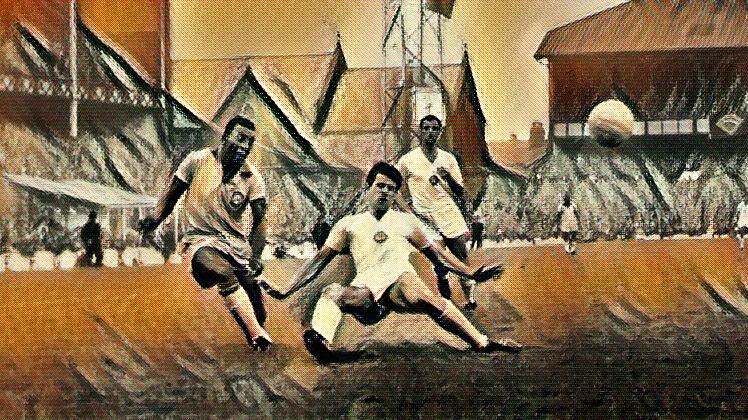 I can’t speak for the rest of the country but for a 10-year-old boy living in Liverpool, I like all of my friends at primary school, was gripped by World Cup fever.

None of my friends had been lucky enough to get tickets for any of the World Cup games to be played at Goodison Park, I likewise assumed that I would not be going but about 2 weeks before the first game , I woke up to find that my Dad had left an envelope on my bedside table. I opened it and to my astonishment it contained tickets for all five World Cup games at Everton. I had never been so happy in my life.

Brazil had been drawn in Group Three with Bulgaria, Hungary and Portugal and the group matches were to be played at both Goodison Park (not Anfield!) and Old Trafford. I was desperately hoping that at least one of the Brazil games would be held at Goodison but for some bizarre reason, all three of Brazil’s games ended up being played there. But to top it all, according to the fixture schedule, if Brazil won the group as expected then they would be playing both the quarter and semi-final games at Goodison. Possibly against England! I felt like I had just been given a season ticket for Brazil!

The “Brazil” effect on the crowds was obvious. Their three group games at Goodison Park drew attendances of 47308, 51387 and 58479, an average of 52000. By contrast the crowds at Old Trafford, without the attraction of Brazil were fifty per cent lower. The games’ attendances were 29886, 25438 and 24129 averaging around 26000. I still have no idea why FIFA thought it was fair to deprive football fans in Manchester of the chance of seeing the twice World Cup Champions.

For fans in the Sixties, access to watching live international football was well- nigh impossible, therefore I relied heavily on magazines such as World Soccer and Soccer Star to find out about the teams who were coming to Goodison. I bought all the World Cup guides, walking to school and using my bus fare instead to buy them. The names of the Brazil team were fixed in my mind. Pele, Garrincha, Tostao, Jairzinho, Santos and Gerson amongst others. They had won the World Cup in both 1958 and again in 1962. This was their chance to make it three times in a row. Everyone at Goodison wanted to see them.

But, I had done my research. I knew that Bulgaria would be no pushovers. They had finished joint top of their qualifying group with Belgium, so a play- off decider was required. Bulgaria triumphed two – one in Italy to qualify. Both goals were scored by the legendary Georgi Asparuhov who I knew from reading World Soccer was being chased by Benfica. However, at that time, the Bulgarian Government refused to let any of their players be sold to a Western European side. Brazil, as winners, had not played a qualification game for eight years. Would this work against them?

Like any starry eyed ten-year-old, I looked in awe at my black and white World Cup fixture wall chart on my bedroom wall as the big day approached. I had my collection of coloured pens at the ready to fill in the score, scorers and the group positions. For some strange reason, the World Cup competition started off on the eleventh of July, a Monday night. I watched as Alf’s English robots  and Uruguay played out a tedious bore draw at Wembley. Little evidence of  “samba football” here then. Still, I did not really care about England, I wanted to see Brazil!

The Brazil against Bulgaria game was the next day, Tuesday 12 July. A strange choice. In  1960’s Liverpool , this was often a good day to stay indoors as the local Orange Lodge undertook their annual march through the streets of Liverpool, followed by a drunken binge in Southport. Fights between Catholics and Protestants were not unusual. However, football seemed to have won over religious bigotry on this day. The streets near the ground were decked in flags of the Group Three teams and flower baskets were displayed on pavements and houses. Liverpool was welcoming the World. And don’t forget that Everton had just won the Cup and Liverpool the League. Merseyside was the football capital of England.

I rushed home from school, changed out of my school clothes, woofed my tea back in record time and got dressed for the match. I was ready and waiting by 4.30, sitting by the front door waiting. My Dad, as was the custom in those days, wore his suit to the match. (When exactly did this tradition stop?) We were approaching Goodison at 6.30 for the 7.30 kick off. But sadly, my Dad was meeting his mates for the pre-match drink. I, along with several other urchins, was deposited in the doorway of the Harlech Hotel and sat there anxiously supping my bottle of pop and scoffing my crisps. At 7.20, we headed to the ground!

The flamboyant World Cup Winners against a dour grim team from behind the Iron Curtain. The roar when the teams came on to the pitch was something I have never experienced in my life before. Brazil, they were really here. All eyes focussed on Garrincha and Pele. Those yellow shirts, they looked like Gods to me. The atmosphere was something I had never witnessed before. Unusually for Goodison, there were no away supporters. However – the surprisingly large numbers of Brazil supporters created a unique ambience.

The majority were seated in the Upper Gwladys Street stand. They hung their colourful Brazil flags from the stands. From the start of the game, the beat of the samba drums pulsated around the ground and never stopped – reaching a crescendo after each of the goals. We had rattles , they had an orchestra of sound. Another sight was seeing so many of their supporters wearing their Brazilian shirts creating a sea of yellow inside and outside the stadium. In the Sixties, you could not even buy a club shirt of your favourite team! They all looked so young, happy and healthy and were a mixture of both male and female supporters.I had never seen so many foreigners in one place before in my life and listening to them converse in Portuguese after a lifetime of hearing only Scouse was such a joy.

Brazil attacked the Gwladys Street end in the first half. From the kick off, it was obvious what Bulgaria’s tactics were. They kicked anything that moved and a very lenient referee did little to stop this. But, giving away free kicks against Brazil was always going to come back to haunt you. After fifteen minutes, Pele lined up a free kick and blasted the ball into the net. At the Gladwys Street End! Brilliant, after the tedium of watching England this is what we wanted to see. And the way the Brazilian team celebrated scoring goals was so exuberant and flamboyant, it was a joy to watch.

Georgi Asparuhov could not get into the game as Brazil continued to attack. Then things just got better in the second half. Another free kick and this time Garrincha bent a stunning shot into the corner of the net from outside the box. Game over.

The Brazilian fans continued to celebrate as they left the stadium. All you could hear was the beat of the Samba drums and the chants of “Brasil, Brasil”. We loved Brazil, they were our team. And we loved their fans. I was due to start secondary school in September and I hoped that I could study Portuguese.

Looking back, I did not realise how lucky I was. Pele had been so badly kicked he missed the next game against Hungary, which Brazil lost. He returned for the Portugal game but was hacked remorselessly by the Portuguese defenders and limped out of the action and Brazil, to the disappointment of the Goodison faithful exited the World Cup. He would never grace the lush green of Goodison Park again.

However, Pele did go on to help Brazil win the World Cup for the third time in 1970.Garrincha never played again for Brazil and died an alcoholic in 1983.  He was allegedly the father of fourteen children. Most Brazilians still insist that he was a better player than Pele. As for Georgi Asparuhov, the scorer of Bulgaria’s only goal in 1966, he tragically died in a car crash at the age of 28. A crowd of 550,000 is reported to have attended his funeral.

But, the World Cup 1966, I was there. I saw Brazil play at Goodison Park. I saw them win a World Cup game at Everton. And I am one of a dwindling number of people who can truly say that I saw Pele score in the Street End!