Skip to content
Posted in International By By Far The Greatest TeamPosted on September 20, 2012July 10, 2017Tagged Hope Powell 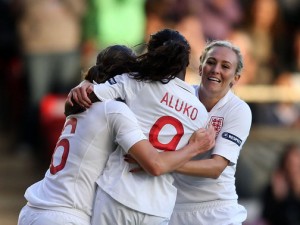 England have qualified for the UEFA Women’s Euro 2013 Finals after a 3-0 win over Croatia in Walsall.

The Three Lions came into the game knowing a victory would catapult them to the top of Group 6 and an automatic spot in Sweden next summer, and they sealed their progress in fairly comfortable fashion.

It should have been a greater margin of victory, but Croatia goalkeeper Doris Bacic saved her side’s blushes with a string of stops, and there was further cause for celebration for Rachel Yankey who earned her 120th cap, a record for the England Women’s team.

Having beaten the Croats 6-0 in March, it took 21 minutes for Hope Powell’s side to get off the mark at Banks’s Stadium when Jill Scott tapped home a rebound from close range.

Eniola Aluko made it 2-0 early in the second half by prodding the ball into the back of the net and skipper Casey Stoney sealed the win, and a place at the Euros, in the final ten minutes, rifling home Karen Carney’s cross from the edge of the area.

The hosts started brightly, quickly seizing control of the ball and forcing Croatia onto the back foot from the off, though Dean Klafuric’s side were far better than six months ago when they capitulated early.

In the seventh minute, Carney called Bacic into action for the first time with a wicked, curling effort.

Yankey had the chance to mark her record-breaking appearance with a goal when she was played in by Aluko midway through the first half, but the winger lacked composure and blazed over with her right foot.

Less than a minute later, though, England went ahead and it was a true poacher’s finish from Jill Scott. Aluko saw her low shot spilled by Bacic and the Everton midfielder turned home the loose ball from a matter of yards.

But Stoney stepped up to put a gloss on the scoreline by drilling home Carney’s low cut back from 18 yards.

England made life difficult for themselves by drawing their opening qualifier away to unfancied Serbia, but they have bounced back magnificently, registering six wins and a goalless draw in Holland in their remaining group games.

Powell has now guided her charges to a fifth consecutive appearance at a major tournament, and after finishing as runners-up at Euro 2009 the National Coach will now be determined to go one step further and claim some silverware in Sweden next summer.