It’s every football fan’s dream to witness their club captain lift the European Cup to a roar of euphoric applause; but to make that dream a reality (as well as a talented squad of players), you’ll need to have a spare £6,358 lying around.

Research from hotel.info has revealed the true cost of Champions League success – and for the dedicated fans that plan on trekking across Europe to show their support for their beloved club, it’s not looking pretty.

With a total of seven away games to attend in order to complete a successful cup run, it’s no wonder wallets are feeling the full force of winning ways. Flights, tickets, accommodation and food and drink alone mean that the costs can quickly accumulate, and that’s not even taking into account any souvenirs you might want to pick up along the way.

Based on Chelsea’s run in Europe last year hotel.info has calculated the average costs accrued for a following fan on the road to victory.

As this season’s Champions League action kicks off this week, hotel.info has compiled the top 10 list of clubs that fans should hope to avoid, if they want to keep their bank manager happy that is. The most expensive European destinations for away fans in this year’s draw are as follows: 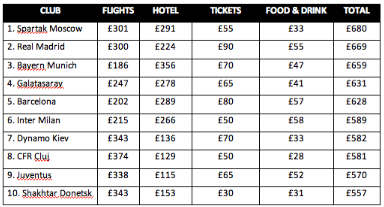 Andreas Klug, Country Manager UK for hotel.info said of the research: “After a sensational summer of sport in the UK the appetite for big occasions will continue. Fans will be even more excited about following their teams around Europe in the hope of seeing more success. We’ve compiled this research to educate fans on the potential costs of being caught up in Champions League mania. Whether you’re looking to travel in luxury, or indeed on a shoestring there are a number of options for fans, but be warned, while you can trade a five star hotel for a two star one, costs of the other elements aren’t always so flexible.“

How much does it cost for away fans? Manchester United, Chelsea, Liverpool, Arsenal, Tottenham Hotspur…

Modern football isn’t rubbish. It’s what you make of it.