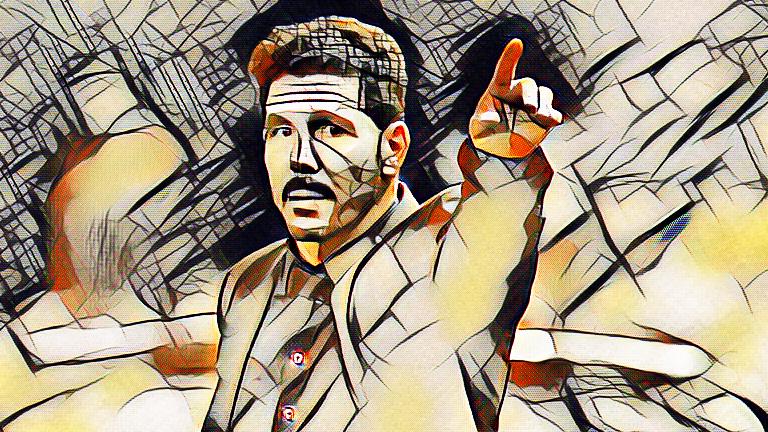 Now, before anyone comments “but, but, Diego Simeone wasn’t a legendary player”, “but, but, Diego Simeone spent half of his career in Italy” – I know. However, we here at Legends of La Liga (by ‘we’ I mean me) thought it would be remiss not to include managers as well as players who have made their mark in Spain. In that case, it is time to meet one of La Liga’s great entertainers, Diego ‘El Cholo’ Simeone.

A no doubt talented midfielder in his playing days, ‘El Cholo’ gained his nickname as his style of play was similar to 1960’s Argentine midfielder, Carmelo Simeone, who also had the nickname. Carmelo shared the same energetic style as Diego as well as a surname, through pure coincidence.

After spending his younger years in Argentina and Italy, Simeone did not make the move to Spanish football until aged 24, where he spent two seasons with Sevilla. In 1994, he moved to Atletico Madrid and there began an association with the club which has now lasted more than 20 years.

As a player, he won the domestic double with Atletico, both La Liga and Copa Del Rey in 1995-96. Simeone was a tough-tackling, tenacious midfielder who was tactically adaptable, playing in various midfield positions and even popping up with several goals throughout his career. Even in his playing days, Simeone was known more for his personality and presence than his technical ability, traits which would stand him in good stead as a manager.

Raddy Antic, Atletico Madrid’s last manager to win them the league before Simeone (1996), said about his former player,

“He’s a competitive man, he is a character. He was not very quick, not technically very good, but he was Diego Simeone.”

Simeone then went on to more success in Italy, winning the UEFA Cup with Inter, as well as a Serie A, Coppa Italia and UEFA Super Cup with Lazio. A second stint with Atletico followed in 2003, where he stayed for two seasons. In total, Simeone managed 198 appearances and 35 goals for Sevilla and Atletico, reportedly deciding to become a manager after spending an hour in the shower after his last competitive game as a player.

Arguably, his most memorable moment as a player came on international duty for Argentina. Many forget that Simeone was once, Argentina’s most capped player, over taking the great Diego Maradona. The most famous of his 106 Argentina caps came against England in the 1998 World Cup, where Simeone reacted dramatically and fell after David Beckham kicked out as a result of Simeone’s tackle. The wrath of the media (mainly English) would prepare Simeone for his career as a manager which was soon to follow.

After winning the Argentine league twice, managing first Estudiantes then River Plate, Simeone soon found himself back with his beloved Atletico, taking over as manager in 2011. His core principles of hard work and effort on the pitch resonated with the fans, with an industrious team reflecting Atletico’s proud background as workers, compared to the rich bourgeois of Real Madrid.

It was a style of play which allowed them to break the stranglehold Barcelona had on La Liga, with Simeone delivering Atletico the league title in 2013-14, securing true legendary status at the club. The precursors to the title were winning the Europa League in 20122-12 and Copa Del Rey the season after.

Simeone had ushered in a golden era at the club, based on the values he had as a player and which Atletico as a club held dear. His one criticism is finishing runner-up to Real Madrid twice in the Champions League. However, with Atletico having the same wage bill as Fulham at the time of the first meeting in the final with Real, it was an achievement in itself to arrive at that stage.

After an indifferent season in 2016-17, Simeone will now be hoping to make another push for La Liga and finally claim a Champions League medal which is gold, not silver. What is unlikely to change anytime soon is Simeone’s legacy, with Former Atletico player Tiago saying in 2014, “The one thing he says in every speech is the word ‘win’. He is God here.”