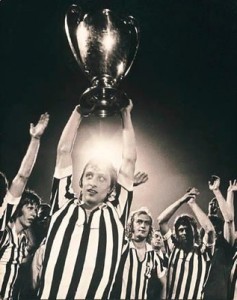 I don’t need to introduce AFC Ajax to you. I’m pretty sure you all know this club, its rich history, its world famous youth academy, the legendary players the club has produced. You are all football fans with knowledge in your bags, you know your stuff.

But if I asked you to name three players in Ajax’s current starting XI, could you? Can you name two? You’ll no doubt be familiar with Christian Eriksen but how well can you do after naming him?

The Eredivisie is not as popular as Europe’s biggest leagues, such as the Premier League, the Bundesliga, La Liga or the Serie A. Despite the fact Ajax is one of the biggest clubs in football history, not many people are interested in the club and its league nowadays. They rather follow a club from one of the bigger leagues. It’s a shame if you ask me but I’m not writing a plea why more people should follow the Eredivisie. I’m here to write about by far the greatest team the world has ever seen: AFC Ajax.

Since Frank de Boer took over from Martin Jol in December 2010, a fresh wind is blowing through the club. The focus is back on developing talents and on giving talents the opportunity to have a shot in the first team. The goal on the long term is to replace players with players from the academy. Buying a player only happens when there’s no youth player ready to make the step yet. Youth academy De Toekomst (The Future) is literally our future. So the new philosophy is also about spending as less money as possible. Players must want to play for Ajax because of the club, its philosophy, its ambition, the fans, the stadium etc. Not because you can earn a lot of money.

Former players such as Marc Overmars (Director of Football), Dennis Bergkamp (assistant-coach) Wim Jonk (head of the youth academy) and of course Frank de Boer have important roles at the club. It’s fantastic to see such names returning to their boyhood club to give something back to Ajax. That also defines our rich history.

Fans say Ajax is Ajax again. We’re playing or trying to play attractive, attacking football with out and out wingers in a 4-3-3 system. The system that belongs to Ajax. The system that is Ajax.

The club’s worth nothing without the players on the pitch who have to do the job. Ajax’s current squad is a very young and inexperienced one. There’s one player who breaks the 30 barrier: Christian Poulsen (32). All the other players are 26 or younger. Ajax have the youngest squad in European competitions (Champions League/Europa League) this season.

In the first games of this season, there’s been rotating a lot in the starting XI. Only the keeper and the back four are pretty sure of their place in the team. Kenneth Vermeer is the one who will been seen between the posts. At 5ft9, he’s not the tallest keeper but his jumping power and cat-like reflexes compensate for his height.

The back four is formed by right back Ricardo van Rhijn, whose style of play can be compared to Van der Wiel’s : a modern full back. A young player who still has to learn a lot but his future looks bright. He has already made his debut for Oranje.

Toby Alderweireld and Niklas Moisander form the core of the defence. Alderweireld has been a regular starter in the last three seasons. The Belgian is a centre back who has a drive to go forward when possible. His passes from deep and goals from a long range are his speciality. Alderweireld is a strong, technical defender with a massive will to fight. His challenge this season will be to take that final step, as Jan Vertonghen did in the past two seasons, becoming a defender that barely makes mistakes and is rock solid. Niklas Moisander came to Ajax as Jan Vertonghen’s short term successor. The Finnish player can be compared to the Belgian. He’s strong in the build up, a good defender and adds a welcome experience to this team.

The left back position belonged to Daley Blind in most of the games this season. Blind is the weakest player in this team. In my eyes he’s not good enough to play for Ajax. He’s strong going forward but you can query his defensive skills. Let’s hope Nicolai Boilesen is back soon after being out with a hamstring injury for almost a year.

Our midfield would have the best balance with Siem de Jong (captain) on the right, Christian Poulsen as a defensive midfielder and Christian Eriksen on the left, cutting inside to the middle. Poulsen is someone who’s mostly known as being a flop at Liverpool FC. He can be an important player for Ajax with his experience. His game is basically retaining and recycling possession, he’s capable of playing as a No. 6. A key spot in Ajax’s game of high pressuring and circulating.

Siem de Jong, Eriksen and Schöne are the creative midfielders. I don’t need to introduce Eriksen, who is one of the biggest talents in Europe and wanted by the biggest club on this continent. An attacking midfielder with a creative mind and a sublime technique. A star in the making. He’s needs to step up his game this season though and become more decisive. Siem de Jong is a player who does a lot of dirty work when playing as a midfielder but he’s more dangerous in his role as a striker. Schöne came over on a free from NEC Nijmegen and is a perfect squad player. A creative player with a good technique and an eye for the goal.

Tobias Sana is a newbie at Ajax. The born Swede came over from IFK Göteborg for just a couple of hundred thousand euros. He’s a winger who’s capable playing on both the right and left. He has pace, a good technique and capable of delivering excellent crosses. A ‘tropical suprise’. Derk Boerrigter is a classic left winger with an superb acceleration and an even better cross. Both wingers are also good finishers.

Last but not least: Ryan Babel, who actually needs no introduction. At Ajax he’ll be focusing on the spots on the left and middle of the attack. From the left he’s most dangerous cutting inside. As a striker he’s a strong player who can hold a ball and lay if off to his team mates. His pace, experience and talent will hopefully lift his career and help Ajax achieving great things.

So far this season hasn’t been spectacular from a fan’s point of view. Ajax are currently sitting three points behind FC Twente, who they beat 1-0 on Saturday. Despite that they are still unbeaten (4 wins, 3 draws) but that’s not good enough when you are Ajax.

Let’s hope this season can end as good as the past two. The squad is talented enough to do so.

Ajax looking for another three points against Manchester City now