Paris Saint-Germain comfortably brushed aside Rennes to continue their domination at the top of Ligue 1, and Lyon came out on top in the battle between third and fourth place in the race for the final Champions League spot.

Elsewhere in France, Nice’s winning streak now stands at four games after they edged past strugglers Bordeaux, and Claudio Ranieri received his marching orders after an altercation with the four official in his side’s victory.

For all the action from Ligue 1 this weekend, read below:

Monaco moved up to second for the time being after an emphatic away victory at St Etienne on Friday evening. Both Lyon and Monaco are battling for an automatic Champions League place this season, and Leonardo Jardim’s team moved six points behind first-place Paris Saint-Germain.

The away team opened the scoring after only three minutes. Keita saw his shot well blocked, and as the ball fell to the edge of the penalty area Djibiril Sidibe lashed in past Stephane Ruffier into the far corner.

The second goal came just after the half hour mark, after some last ditch defending from St Etienne. Thomas Lemar picked up the ball outside the box, cut inside and drilled in low effort to double the score line.

In the 53rd minute, Monaco wrapped up the three points and sparked controversy. From a Joao Moutinho corner, the ball fell to Rony Lopes just outside the box who saw his effort blocked. The ball looped down on the penalty spot, Falcao flicked on towards goal and Ruffier saved well, but only as far as Fabinho who stabbed home. Amid calls for offside, Ruffier appeared to kick the ball towards the linesman, and was shown a red card.

Just seven minutes later, Monaco scored their fourth. Keita found the back of the net when teed up by Fabinho in the centre of the box. The emphatic victory sees Jardim’s men rise to second for the time being, before Lyon’s fixture.

Amiens have now lost their last three games, after a 1-0 defeat to fellow mid-table side Troyes.

In a game marred by multiple missed chances, it was the away side who did the early pressing. Moussa Konate fired narrowly wide from inside the six-yard box before the forward was caught offside following Gael Kakuta’s incisive through ball.

The home side attempted to hit back, and Karim Azamoum and Samuel Grandsir saw their efforts well saved inside the penalty area by Regis Gurtner.

Troyes had to be patient, but made the breakthrough in the 78th minute. Stephane Darbion found the bottom left corner of the net after a set-piece, to secure the valuable three points late on. The win means that Troyes are level on points with their opponents, albeit with a slightly worse goal difference.

Strasbourg are now unbeaten in their last five fixtures after a 2-1 home victory over Toulouse, leaving their opponents firmly in a relegation scrap.

The home side saw their first attempt on target saved by Alban Lafont after only eight minutes, after Andy Delort teed up Max Gradel on the right-hand side of the box.

After 24 minutes, Strasbourg were awarded a penalty, when Alexis Blin brought down Jeremy Blayac in the penalty area. Jonas Martin stepped up and stroked the ball home into the bottom left corner to hand his side the lead.

But on the half hour mark, Toulouse equalised. Max Gradel saw his free kick deflect back towards him off the wall, and as the ball came down the Bournemouth loanee volleyed home into the bottom right corner.

The away side hit the post five minutes before half time, when Andy Delort went close from a tight angle to the right of the box.

But it was Strasbourg who would pick up all three points. In the 52nd minute, Dimiri Lienard whipped in a corner which Kader Mangane hooked home into the top right corner on the volley.

Metz picked up only their second win of the season after a gritty performance at Montpellier helped them to a 3-1 victory.

The home side took the lead in the 20th minute, when a long ball over the top was met by the run of Jerome Roussillon, who raced into the penalty area and slotted home. Just when it looked to be business as usual for Metz, they equalised.

Renaud Cohade picked the ball up from 25 yards out, and drove a low shot into the bottom corner past Benjamin Lecomte.

In the 84th minute, Metz took the lead. Florent Mollet curled a free kick which looked destined for the top right corner before Lecomte saved well. The rebound fell to Ibrahima Niane, who played the ball across the box for Emmanuel Riviere to slot home despite calls for offside.

As Montpellier looked to find an equaliser, Metz punished on the break and sealed the victory. Moussa Niakhate surged forward, and played the ball across to Nicolas Basin who lashed an effort into the top right corner to top off a memorable performance.

Lille remain in the Ligue 1 relegation zone, after a resounding 3-0 away defeat to mid-table Dijon.

The home side completed a three goal salvo before half time, and were able to see out the second period to gain all three points. Wesley Said opened the scoring in only the 12th minute. Mehdi Abeid chipped over a delightful cross to the back post, where Said was on hand to blast home into the roof of the net.

Five minutes later, and Dijon had doubled their lead. The home side won a free-kick inside the Lille half, which Morgan Almalfitano took quickly to release Wesley Said. Said surged forward before picking his spot in the bottom left corner from just outside the box.

The third came ten minutes from half time, through a stroke of luck for Dijon. Mike Maignan failed to deal with a low shot at his near post, and the rebound struck Fode Ballo-Toure before hitting the back of the net.

In another mid-table clash in France’s top flight, neither side could find a way through and were forced to settle for a point apiece.

It was Guingamp who created the better chances, and forced Remy Vercoutre into several saves. But Caen did all the attacking in the opening stages, and chances from Jordon N’Kololo and Frederic Guilbert were spurned.

Marcos Coco also tested Vercoutre with a speculative effort from 40 yards, before Ronny Rodelin also fired over the crossbar when just outside the penalty area.

The second half told a similar story, as Ivan Santini saw his shot well saved as he fired towards the bottom right corner. In the end, both teams couldn’t make the breakthrough and battled towards a scrappy point.

France’s runaway league leaders continued their dominating march towards the Ligue 1 title after an emphatic 4-1 away victory at Rennes.

PSG opened the scoring after only three minutes. Kylian Mbappe exchanged a one-two, before racing into the penalty area and crossing from the byline, leaving Neymar on hand to tap home into an empty net.

The two summer signings then combined for the Parisians second. Neymar turned provider this time, after his drilled ball into the box was slotted home by Mbappe.

But in the 53rd minute, Rennes created a foothold back into the game. Benjamin Bourigeaud whipped in a corner which was met by the head of Morgan Amalfitano. The Frenchman’s effort clipped the inside of the left upright, and Firmin Ndombe Mubele stabbed home the rebound.

Any hopes of a late comeback were dashed, when Neymar threaded through Edinson Cavani in the 75th minute. The Uruguayan banished his goal drought with a deft lob over Tomas Koubek to restore the two goal lead.

A minute later, Paris Saint-Germain grabbed their fourth. Unai Emery’s side quickly won possession from Rennes’ kick-off, and Mbappe played the ball across the box for Neymar to slide in and finish.

Claudio Ranieri was sent to the stands for an altercation with the fourth official, as Nantes narrowly defeated struggling Angers 1-0.

Both Leo Dubois and Diego Carlos tested Alexandre Letellier’s reflexes in the early stages, before Romain Thomas brought down the former inside the penalty area.

The referee pointed to the spot, and Emiliano Sala drove his spot kick into the top right corner to hand his side the lead.

In the 50th minute, Mateo Pavlovic appeared to clamber all over Santy Ngom, but the referee failed to award the foul. Claudio Ranieri approached the fourth official and tried to demonstrate the infringement using his arms. Karim Abed spotted the actions of the former Leicester boss, and banished him to the stands, for which Ranieri apologised in his post-match interviews.

From the stands, Ranieri saw his team cling on for three valuable points, keeping them four clear of sixth place Nice.

Bordeaux’s recent struggles continued after a narrow defeat at Nice, who have now won their last four games.

The away side looked to open the scoring, and created chances through Nicolas de Preville and Youssouf Sabaly. But against the run of play, Nice took the lead.

In the 36th minute, Maxime Le Marchand curled in a cross which Pierre Lees-Melou nodded across goal, allowing Mario Balotelli to stab home at the back post and grab his eighth goal in as many matches.

The former Manchester City striker then saw another attempt saved by Jerome Prior in the second half, after being teed up by Jean Michael Seri. Lees-Melou cracked an effort against the woodwork moments later, and Bordeaux struggled to break through a resolute Nice defence.

In the battle between third and fourth, Lyon came out on top to remain level on points with second-place Monaco.

It was a horrendous error from Steve Mandanda that allowed the home side to open the scoring. In the sixth minute, Nabil Fekir fired a free-kick towards the far post which Mandanda looked to have fielded comfortably, before the ball hit the goalkeeper in the chest and ended up in the back of the net.

His team mates looked to make up for the error, as Adil Rami tested Anthony Lopes after meeting a corner and Florian Thauvin fired narrowly over the crossbar.

But Lyon made it two-nil five minutes after the restart, just when Marseille looked set to level the scores. Fekir’s corner fell to Mariano on the penalty spot, who fired towards goal. Mandanda plunged to his right to save well, but Maxwel Cornet kept the ball alive and fired across goal for Mariano to tap home.

The result means that the gap between the two teams increases to three points, as the race for a European place continues to heat up over the Christmas period. 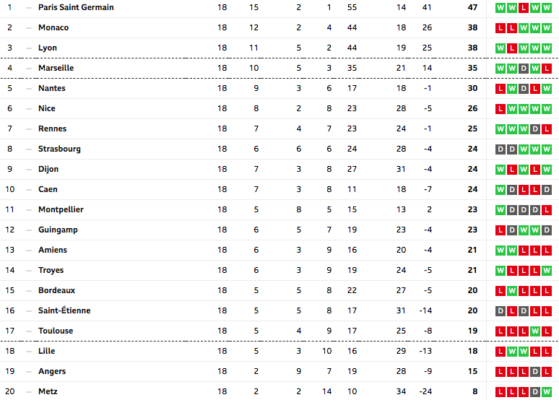