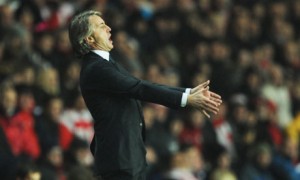 Any lingering hopes of a charge towards the title evaporated yesterday as City lost 3-1 away at Southampton, leaving United with the chance to extend their lead at the top of the table to 12 points with victory over Everton today. It was the first time under Roberto Mancini that City have been so comprehensively outplayed in the Premier League; a defeat inflicted on us by a very average side. This was Southampton’s first victory against a team in the top half of the table, and only their sixth win this season. City left the south coast embarrassed and with Chelsea and Spurs breathing down our necks in the race for second.

Not since the shambles that was the 3-0 defeat to Spurs back in 2009 have City been so totally dominated in a league game. Back then we had Mark Hughes in charge and poor displays were largely expected. We were all over the place when under Hughes: leaking goals at a ridiculous rate, and playing with all the strength of a Liberal Democrat pre-election pledge. Sides cut through us with ease and we struggled to find any kind of consistency.

As soon as Mancini took over in December 2009, things quickly started to change. He may have only moved us up one place (Hughes left us in 6th and we finished that season in 5th), but the difference in our approach was obvious: we looked a professional outfit capable of stringing together unbeaten runs. Mancini was laying the groundwork for our future success.

What followed that season has been consistent improvement domestically, with no side managing to beat us in the manner Spurs, and many other sides, did under Hughes… until yesterday. Southampton were simply better than us in every area of the pitch. Take away the clangers from Hart and Barry and you’re still left with a shambolic display that proves beyond doubt we have gone backwards since we won the title in May.

He also opted to start Javi Garcia at centre-back, despite the returning Kolo Toure being available, a decision which backfired hugely as he struggled with the pace and positional sense needed to play that role, with City looking Hughes-era bad defensively. We’ve seen flashes of decent play from Garcia, but if we’re honest he’s been a disaster since his summer move. He lacks the pace and range of passing to be truly brilliant midfield player, and judging by this performance he’s certainly not a centre-half.

Mancini’s decision to remove Silva in place of Maicon was another head-scratching move from the Italian. Why take off your finest playmaker in a game your chasing? It made no sense to me whatsoever, and Mancini would do well to explain it.

With the title race all but over, City must now focus on securing second spot and winning the FA Cup, but if we are to do that we must start picking our strongest side and stop making nonsensical substitutions that stymie our play. Silva must be played more centrally and should be playing full 90 minutes consistently; Tevez, when available, should be starting ahead of Dzeko; and Samir Nasri should be dropped permanently after was can only be described as a dreadful season from him. Mancini deserves time to put right our current troubles, and our transfer strategy this summer must be far better than last. In the meantime, there are ways the manager can stop contributing to our own downfall.