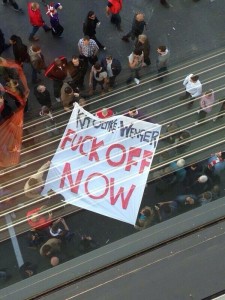 All the talk leading up to this weekend’s fixtures was about the banner that a group of Manchester United had paid to be flown from a plane.

In the stadium, this banner was booed and when David Moyes walked out on to the pitch he was greeted with a warm applause. There were several chants of support for him too.

Arsenal fans had a banner of their own planned for today’s game against Manchester City, telling the Arsenal manager, who has now been in charge of over 1000 games, which reads “F*CK OFF NOW”. Charming!