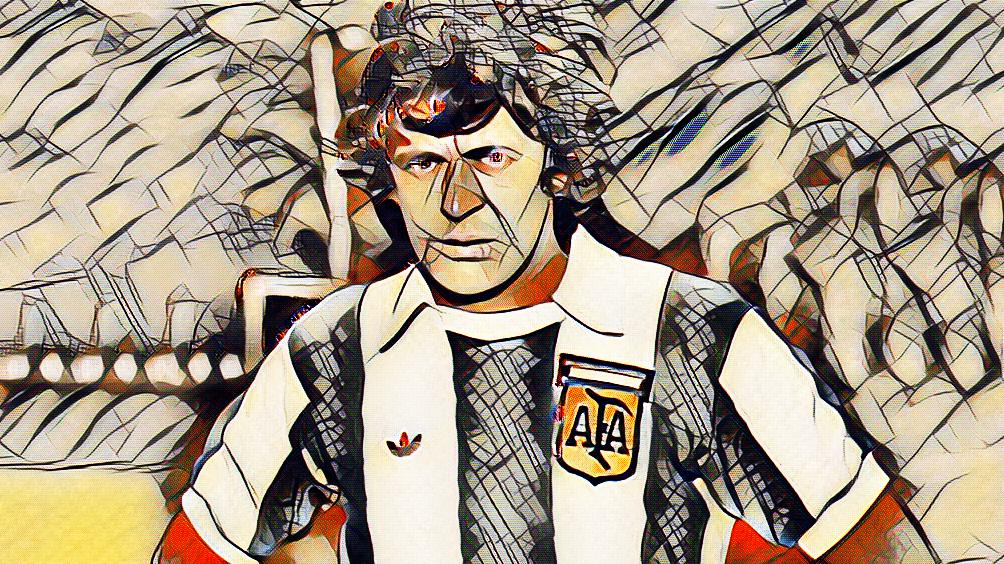 He was a part of the Argentina squad that won the World Cup in 1978 and he is still considered to be one of the greatest winger in the history of argentine football. Yesterday he lost the battle against cancer. This is my tribute to René Houseman.

“Don’t worry mom, these feet will save you” – this was a phrase he always remembered to reminisce about. He was around seven years old and loved to go outside in the street to kick the ball against a wall. He grew up in poverty in the neighbourhood of Belgrano in Buenos Aires. Before his football career flourished he worked at a company that delivered meat to different stores all around Buenos Aires.

When he was bought by Huracán in 1973 it was the first meeting with Menotti, but certainly not the last. He had been an important part of the Defensores de Belgrano team that won the Primera C in 1971. Menotti was manager of Huracán at the moment and had been giving a tip from one of his contacts that there was an exciting prospect in Defensores. The Huracán officials were worried about the rumors that Houseman was having a problem with alcohol and therefore put him in an apartment far from the people they considered had bad influence on him, but also in an effort to keep track at him. But it was to no good, Houseman has later recalled that he played drunk in a game against River Plate back in the 70s. The day before had been his son’s birthday and the liquored had been presence. His teammates gave him a couple of heavy cold showers and a couple of cups with coffee. But it didn’t help he recalled a couple of years later.

“I had to start on the bench but came into the game in the second half when the score line was still goalless. I dribbled past three River Plate defenders and scored the opening goal of the game. After the goal, I fell to the ground and started to laugh. I was exhausted so I ask for a change and went straight home for some sleep. I don’t remember anything of this but my teammates have told me exactly what happened.”

During Houseman’s first year with Huracán he won the Primera Division and the love affair with the team from Parque Patricios had just begun. The team of 1973 was something special and is still remembered as one of the greatest sides an argentine side has ever produced. Together with Miguel Brindisi, Carlos Babington and Omar Larrosa they dominated the biggest of scenes in Argentina. Menotti was a manager that didn’t only chain-smoked and defined the bohemian style of Argentina. He loved the beauty of football and didn’t think there was any point in playing football without beauty. As he used to say:

“To those who say that all that matters are winning. I have to warn them that someone always wins. Therefore, in a thirty-team championship, there are twenty-nine who must ask themselves: what did I leave at this club, what did I bring to my players, what possibility of growth did I give to my football players?”

In the World Cup of 1974 Houseman became Argentina’s top scorer with three goals. It didn’t go well for Argentina though, who went out in the second stage of the tournament.

With Huracán, Houseman played until 1980 when he was transferred to River Plate. But before this, he was selected to play for Argentina in the home World Cup of 1978. Argentina was a country in disharmony since the military coup a couple of years earlier and was now under the rule from a brutal military regime. The World Cup was a possibility to show the world that Argentina was a country in harmony and that it wasn’t as horrible as the international media was trying to insinuate. The World Cup turned out to be a success for both Argentina and Houseman. He was one of the most significant player in Menotti’s squad. He scored one goal during the tournament which came in the second group stage against Peru. Argentina won the game with 6-0 after Kempes and Luque had scored two goals each and Tarantini had scored once.

Although he was very praised during the tournament, he didn’t start in the final against Holland. Instead, Menotti preferred Oscar Alberto Ortiz. Argentina won the World Cup and after the tournament, he continued to play for Huracán before the transfer to River Plate took place in 1980.  He only spent a year in River Plate before he moved on to the Chilean giants Colo-Colo and then AmaZulu FC in South Africa. In 1984, he was back in Argentina again and played for the Independiente side that won both the Copa Libertadores and Intercontinental title that year. Although, Houseman only played three matches for Independiente before he decided to finish his career in Excursionistas.

He has, after his playing career, talked about how hard it was to quit playing football. To the Argentine football magazine “El Gráfico” he said back in 2007 that he was afraid of dying.

“I’m scared of dying. I have problem, pain in my stomach. I don’t know if it’s cancer or what it is. The doctors won’t tell me anything. But my old man and old lady died from cancer. I’ve had this fear for quite a while.”

On the 22th of March this year, Houseman passed away after fighting against tongue cancer for a year. Just a couple of weeks ago, Huracán posted a message appealing to find blood donor to help him. He was one of Argentina’s most gifted players of all time. Menotti once said that he was a mixture of Maradona and Garrincha. When the news of his death reached the world, many of his former teammates and clubs sent their condolences. One of them was Osvaldo Ardiles who played together with him in both Huracán and the national team.

“René was an extraordinary player. Unique. He had all the ability in the world. Courage, quickness. I feel privileged to have played with you. To have had that experience. Rest in peace my friend.”