Coliseum Alfonso Perez, Getafe – “If I’d been at home, I would have changed the channel,” remarked Eibar captain Dani Garcia after Getafe’s goalless draw against Eibar. It was certainly nothing to get overly excited about. It was a match between two inform sides that deploy a 4-4-2 formation in an organised and aggressive manner. Their similarities led to them cancelling each other out. The early kickoff may have been staged to engage the Japanese audience, as two of their nationals took to the pitch, but it did little to aid the spectacle. Yet there really is no excuse for the poor first-touches, skewed passes, or scuffed shots that did frequent the match. Although clear goalscoring chances were few and far between, Eibar probably felt they deserved more.

The Basques dominated much of the possession and looked the more fertile in the final third. A clumsy foul by Djene Dakonam on Sergi Enrich in the Getafe penalty area ten minutes after half-time presented Eibar with the chance of the breakthrough that they had worked hard for, only for Joan Jordan to blaze the spot-kick over the bar. Eibar, however, had goalkeeper Marko Dmitrovic to thank for ensuring they left the capital with a point as he got down well to save a shot aimed at the bottom-right corner by Mehdi Lacen. It was a match in which both defences outfought and out-thought their attacking counterparts. There was plenty of fight from either side it was not one for the purists.

Although there were no goals to see, there was plenty to observe – since Getafe were last in La Liga, only two seasons ago, the club has got new players, a new manager, and new fans. Jose Bordalas began his coaching career in the third division nearly 24 years ago – he guided Alaves to the Primera two seasons ago but never got the chance to coach them in La Liga as Mauricio Pelligrino replaced him. At Alcorcon, he led them to the promotion play-offs but was let go. Getafe brought him in last season when they were second bottom … of the second division. He won promotion with them in May. His opportunity in Spain’s top division is finally here.

Bordalas is known to be a hard taskmaster who considers a win a win but a defeat like the end of the world. Getafe defender Juan Cala admitted that Bordalas constantly has his foot against your throat – figuratively speaking of course. But it is the manager’s drive, determination, and ambition for this Getafe side that has spurred the Madrid-based club this season.

Bordalas was constantly running up and down the touchline on Saturday, trying to keep up with play either to direct his team or kick the ball himself. His watch threatened to fall off on numerous occasions when he was gesticulating with his arms. This is a manager who has finally been given his opportunity and doesn’t want to let his club or himself down.

Old favourites such as Jorge Molina and Damien Suarez are the wily old heads amongst a group of talented young players. Markel Bergara has come up with many a goal this season whilst Guita has been impressive in goal. Even ex-Liverpool striker Dani Pacheco is only afforded a place on the Getafe bench.

The Coliseum was almost full on Saturday – this was never the case during Getafe’s previous and only spell in La Liga when the twelve consecutive top-flight seasons became monotonous. The ground often resembled a library on matchdays, with local football fans siding with Real or Atletico rather than the one on their doorstep. Even now, with a dedicated Pena section in the south stand to lead the singing and a near-capacity crowd, it is difficult to call it a coliseum but at least there are now signs of life in the old ruins.

A victory on Saturday would have sent Los Azulones into the European places. Fans and players are impassioned by a promising manager and the club aims to become one of the most economical and green clubs in Europe. Things are looking bright in Southern Madrid. A fresh and rejuvenated Getafe has emerged.

Mestalla, Valencia – The marching band walked out onto the turf. The conductor – a recent appointment after a number of unsuccessful ones had gone before him – tightened his grip on the baton. And then they played. There were a couple of solos here and there, but when they combined it really was a joy. In recent times, there have been too many flat notes. Many of those whose hearts weren’t in it have gone; replaced by more ambitious – and perhaps more talented – individuals.

Simone Zaza was exquisite – especially in the first half – his touches teased and created space. The Celta Vigo defence – who are pretty decent themselves – were left bamboozled. Often Zaza and Rodrigo combined for a duet – a quick one-two, a pass around the corner. Andreas Pereira occasionally joined in to make it a trio. This epitomised what Marcelino is trying to do at Valencia, fast-paced attacking football that gets the crowd to its feet. The Mestalla crowd are known for getting on a player or managers back pretty swiftly but get it right and they become quickly enthused.

Celta were happy to play on the counter – the front three of Iago Aspas, Pione Sisto, and Maxi Gomez attempted to match their Valencia counterparts for skill and trickery – and Valencia goalkeeper Neto was forced to make an astonishing reactive save on the line. Chances came and went for Valencia – a mixture of the woodwork and the side netting denied the hosts from taking the lead.

But on the half-hour mark, Valencia’s pressure paid off. Zaza headed past Ruben Blanco for his tenth La Liga goal of the season. ‘Simone Zaza’ was sung with gusto by the hardcore fans in the south stand to the tune of ‘I can’t take my eyes off you’ – symbolic, possibly, as Valencia are looking as good as they have done for at least a decade.

However, Los Che fans were still finishing off their half-time bocadillos when Iago Aspas levelled for Celta with a close-range effort. The supporters from Vigo situated up in the higher echelons of the stadium jumped with joy. Celta saw much more of the ball in the second period – Maxi Gomez and Daniel Wass had chances to push the visitors into the lead. But with ten minutes left to play Pablo Hernandez fouled Nacho Gil in the area and gifted Valencia with a match-winning opportunity. Goalkeeper Ruben Blanco guessed the right way and got a hand on Dani Parejo’s penalty kick, but the ball bounced back into the net. The victory – which keeps Valencia three points ahead of Real Madrid – was lucky, but Valencia’s season has certainly been anything but. 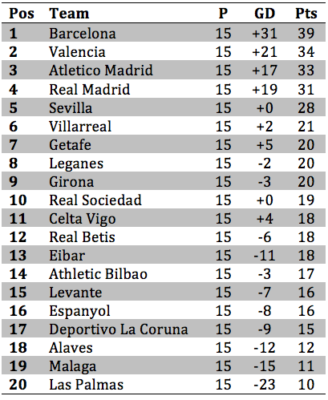