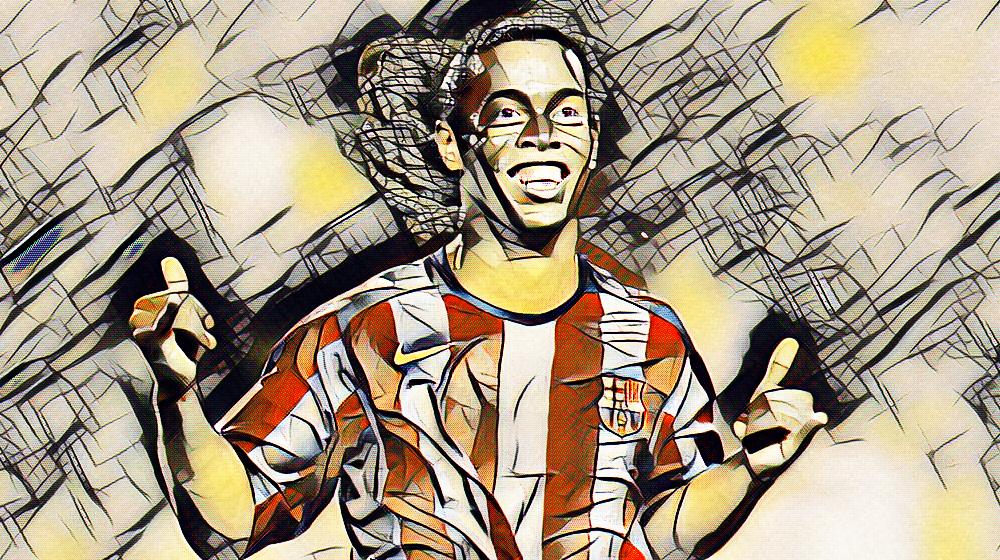 So it’s official. Ronaldinho, one of the most gifted players of his generation, or perhaps any generation, has retired from competitive football.

Of course this is not a surprise as he’s not played in a competitive fixture for over two years. He is nearly thirty eight and so it is probably long past time for him to hang up his boots. Not that anyone really expects him to settle down. Much of Ronaldinho was about his off the field activities as it was about what he did on the pitch, and on the pitch he was unreal. At his peak he was unbeatable.

Magician is a word often used to describe players who can create goalscoring chances for a team, or indeed score goals when the opportunity seemed hopeless or non-existent. But there are run-of-the-mill magicians who can conjure tricks which have been seen before, and actually their talent is the vision to spot a pass, a run, an opportunity where others haven’t. For me, a magician is all about slight of hand. It’s the now-you-see it-now-you-don’t aspect which I find so captivating.

Ronaldinho Gaucho was just that. He could do things with a football no player had done before or since. He used trickery and slight of foot to conjure scenarios on a football pitch. Sometimes he’d just perform these feats for the sheer hell of it. At times I was sure he had dislocated ankles. He was able to switch the ball through degrees you never imagined were possible. In a game of angles, many a defender would calculate where they thought the ball could go, but Ronaldinho managed to get the ball to go in areas no one considered or could do anything about. In an era before pause and rewind of live telly things often happened for too quickly to be able to truly understand. This was also a time before hundreds of cameras at matches and so you never got the ideal view to fully appreciate the true ingenuity.

That’s the mark of a true magician, slight of hand, convincing all who were watching the impossible was in fact, possible. Yeah there’s no way he’s going to pull this trick off, we’re watching his every move. There’s no way he’s gonna be able to do that……oh my god, he’s done it. Did you see that? Did you see what he did? How did he manage to do that? Incredible. People would stream away from stadiums discussing it for weeks.

It’s difficult to remember someone who enjoyed their football as much as Ronaldinho. At times you would almost believe he wasn’t in control of his feet or his brain. Sometimes it looked as if he was enjoying it as much as us, given he had the best view of it all, the best seat in the house.

At his peak I don’t believe I have seen anyone better. But his peak was all too short. He was probably past his best at twenty six. They say players reach their peak two years later but Ronaldinho had given everything he had to give and with his body suffering the efforts both on and off the pitch, his star waned. In an era where the pressures on a professional footballer are bigger than they were in days gone by, Ronaldinho was now considered too slow and too injury-prone to compete at the highest level.

One of the first things Pep Guardiola did at Barcelona was to get rid of him. At the time it was a huge decision and one which Guardiola received a fair amount of criticism. But with the luxury of hindsight, it appears to have been the making of the club, the team and the manager.

In team sport it can seem the ideal to have a player as talented as this, but far too often others become lazy as time after time the option is simply to give it to the star and he’ll win the game for us. And he did. Plus, if the player himself hasn’t noticed how he’s lost his mojo then he can become a liability to the team as he still believes he can win things on his own.

Ronaldo de Assis Moreira was born on 21st March 1980 in Porto Alegre in Southern Brazil. He earned the nickname Ronaldinho (pronounced Ronal-jin-yo) as he was often the youngest and smallest player in youth team games. At the age of thirteen he scored all twenty three goals in a 23-0  win. He developed his skills in futsal and beach football,which accounts for many of his tricks in the larger format years later. In 1997 he was instrumental in helping Brazil win the under-17 World Championship. He made his senior debut for Gremio as an eighteen year old. Two years later he made the move many of his countrymen dream of, to Europe and Paris Saint-Germain. In 2002 he burst onto the world scene as one of the most influential players in Brazil’s World Cup win in Japan and South Korea. England fans will remember his goal against us in the Quarter-Finals. Beat Brazil and who knows, we might’ve won that tournament, but Ronaldinho, Ronaldo and Rivaldo put paid to that.

It was more than just his goal which sank England. Michael Owen had put England in front midway through the first half but Ronaldinho dragged his side back into it just before the break. He pinched the ball off Beckham inside his own half by the wing, and then ran all the way to the edge of the England area with a move full of twists, turns and step overs. He eventually put Rivaldo in and the game was level. Five minutes into the second half and Brazil had a free-kick about forty yards out to the right of centre. With the penalty box full of players and everyone expecting Ronaldinho to float one into there, he fooled them all by floating it straight into the top right hand corner of David Seaman’s goal.

During his career at PSG he began to frustrate manager, Luis Fernandez, with his penchant for the Parisian nightlife and would often be late back from breaks. PSG weren’t the rich club they are today and in the end their disappointing league form was what convinced Ronaldinho he needed to move on if he was to win things.

Barcelona came calling after their attempts to attract David Beckham failed as he went to rivals, Real Madrid. They spent thirty million euros for him, outbidding Manchester United. Lionel Messi has spoken of the effect Ronaldinho’s arrival at the club had on him and everyone else. He identifies this time as when the club changed.

Barca won the league in his first season and he was named FIFA World Player of the Year. He was awarded this again the following year when we reached peak-Ronaldinho. When he scored twice in a 3-0 win in the Bernabeu, the home fans granted him the honour of applauding him. Probably only the great Maradona has ever been afforded that acknowledgement.

Barca retained their La Liga title and won the Champions League for the first time in fourteen years. Ronaldinho scored against Chelsea and Benfica on the way to the Final where they saw off Arsenal, 2-1.

He appeared to do no wrong. He was captain of the Brazil side which beat Argentina to win the Confederations Cup in 2005. But then the 2006 World Cup, where many in Brazil expected him to rival Pele’s exploits from 1970, never really happened for him. But it never really happened for the whole team as they went out to France in the Quarter-Finals.

He eventually left Barcelona in 2008 as his constant partying, and lack of focus in training was starting to take effect. He had two seasons with AC Milan but was often on the bench as people became impatient of his fitness, or lack of it.

In 2011 he returned to Brazil and played for a succession of clubs, culminating in helping Atletico Mineiro win the State Championship and then Copa Libertadores the following year. He was South American Footballer of the Year in 2013. Testament to his ability to still turn it on, albeit more sporadically than he had.

And there you have it. That’s the end of that. One can focus on the excess, the lack of fitness, to disappointing end but I’d rather focus on the couple of years where he was unsurpassed by any player around. Messi and Cristiano Ronaldo will be considered to have had better careers as they’ve been at the top for much longer. Maradona was the best player I’ve ever seen given what he was able to achieve against the pitches he played on and the treatment he received from opposing defenders. Maradona’s reign at the top was longer than Ronaldinho’s but as I have said earlier those few years in the early part of the twenty-first century have been some of the best I have witnessed by any player in over forty years.

When he was just eight years old, Ronaldinho experienced the pain and suffering of his father dying from a heart attack at home in the swimming pool. Whether this spurred him on to live his life to the full on and off the pitch, no one really knows. We could spend a lot of time looking at what he didn’t do, but if we consider what he did achieve and how it was when he was achieving it, then we can only mirror him and smile.

Do we mourn him? Do we wonder what might have been? No, I would rather consider those of us who witnessed it as some of the luckiest people alive simply because we were around at the same time.