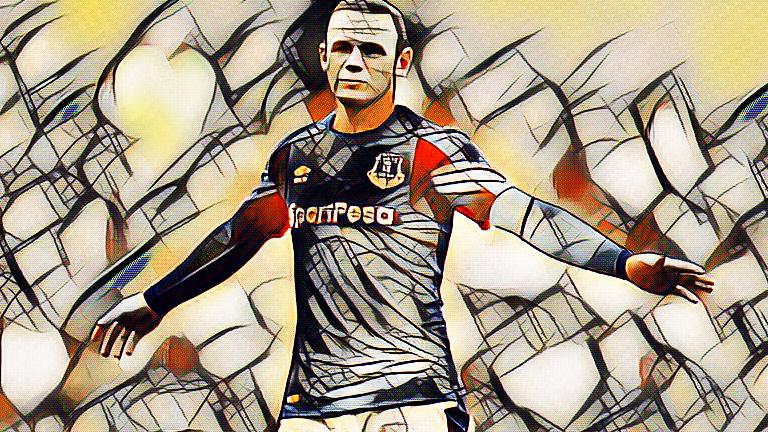 In becoming a player/coach with Derby County for 2019/20, Wayne Rooney underlines the East Midlands club’s reputation as a breeding ground for promising young coaches, and managers-in-waiting.

For most living Rams fans, Brian Clough’s glorious reign at the club is the obvious genesis of this reputation. Retired at the age of just 26 due to injury, Clough was a force of nature as a manager. Strict yet humorous, philosophical yet practical, and a winner at all costs, he drove the club upwards like a rocket, eventually striking gold with the First Division title.

Other true Englishmen have taken the reigns since, with Gary Rowett and Paul Clement both exiting the club with win rates of over 40% this decade alone. Even today, nearly fifty years on from Derby’s legendary title win, the club is looking back on a season where the chairman took a chance on the inexperienced Frank Lampard. That move very nearly achieved maximum vindication, with Derby losing the promotion playoff final by just one goal.

With Lampard since making the huge leap from Championship to Champions League, following his appointment as Chelsea manager, born winners like Wayne Rooney will inevitably want to follow his lead.

Should Rooney Have Stayed in America?

Overall, Rooney’s time in the MLS has been a modest success. His deployment as a ‘number ten’ has enthralled American audiences, with his ability to pass and shoot never failing to captivate the crowd. For Rooney himself, but choosing between the glamorous MLS and the blood-and-thunder affair that is the Championship is a no-brainer.

A classic ‘street footballer’ in his childhood, who needed no coaching to max out on his natural ability, Rooney’s very soul demands the latter venture. As evidenced by some of his most regal strikes as a blue Merseysider and a Red Devil, Rooney has never been averse to a risk – which the Championship undoubtedly is.

Seeing a former top-tier Premier League star on the touchline, whether as a coach or a manager, is always a source of excitement. Chairmen will invariably prize results over entertainment though, and there is never a guarantee that any man touted as ‘the next Brian Clough’ will fulfil expectations. The failures, who end up dropping from a Premier League or Championship calling, into a far lower league or out of management altogether, are much more common than the success stories.

However, the odds are firmly in favour of Rooney, and speaking of odds, if you bet on football you will likely see Rooney’s arrival at Derby in January coincide with a shortening of the club’s promotion odds – with that development fuelled by Rooney’s reputation alone. While Phillip Cocu will still be the man calling the shots at Pride Park, but Rooney’s influence will surely impact the club in a more than positive way, providing a binary bag of experience.

In turn, Derby fans should not be surprised to see more youth talent coming in on loan, with Manchester United’s Mason Greenwood and Everton’s Lewis Gibson potentially being seen as fair game by Rooney and Cocu.

From Dressing Room to Dugout: A Mixed Litany

Though homegrown player/coaches will always exude confidence on the touchline and in the press room, the private inner desire to figure out what exactly is needed to make it in that exhausting hybrid role is surely ever-present.

In addition to inheriting a squad that simply clicks, perhaps the most obvious element is common ground. If the lines of dressing room hierarchy are negotiated to the right degree, and the campaign feels more like a shared experience than a mere exercise in tactical obedience, then the results can be astounding.

Lampard, for instance, utilised his existing connections to Chelsea to acquire some well-renowned youth talents. Fikayo Tomori and Mason Mount both turned out to be a vital part of the subsequent promotion challenge. However, Lampard’s ability to connect with both the young and the seasoned in the dressing room gave him more than one dimension of virtue.

Going further back, football fans in England have seen the likes of Glenn Hoddle, Bryan Robson and Gianluca Vialli enjoy a similar relationship. Through a great mix of fortune and interpersonal ingenuity, they achieved some impressive feats as a player/manager with otherwise ordinary clubs.

As one of the most skilled players of his generation, Hoddle was a major force in any second-tier match, even in the early 1990s, when time was catching up with him. Most memorably, his stint as player/manager of Swindon Town saw the humble Wiltshire club achieve the unthinkable, and join the Premier League in 1993 – albeit for a single, chastening season, before which Hoddle joined Chelsea as player/manager.

Following Middlesbrough’s relegation that same year, Bryan Robson became player/manager, and took the Teessiders back to the big time in 1995. As a player/manager with progressive ideas, he wasted no time in building a squad around stylish players such as Nick Barmby and Juninho, establishing himself as a believer in mixing homegrown talents with foreign influences. The short-term results were fantastic, with 1995/96 seeing Middlesbrough emerge as early title contenders, before fading away in the new year.

Gianluca Vialli, meanwhile, was highly influential as Chelsea won the UEFA Cup Winners Cup in 1998 and established themselves as a force on the continent, in a prelude of events to come beyond the new millennium.

What Could Rooney’s Return Mean for Football?

Young coaches and managers of Lampard, Rooney and Gerrard’s generation are invariably expected to champion a positive game plan. This can only be expected, with such players knowing nothing but the multi-national Premier League seen today, with its diverse blend of skills and values.

One of the characteristics therein is a focus on counter-attacking, a high defensive line, and the heavier involvement of midfielders in attacking scenarios compared to yesteryear.

Though exciting, such approaches often come with a degree of defensive naivety. On the basis of the Championship’s opening weekend, this idea seems to hold some weight. This summer, for instance, saw the appointment of 2000s England international Jonathan Woodgate as Middlesbrough manager, replacing the conservative, ‘old-school’ Tony Pulis.

The early fruits of his endeavours were evident in Boro’s opener at Kenilworth Road, with Boro making seventeen attempts, of which eight on target. That compared significantly to last season’s average of nine attempts and four on-target, overseen by Pulis’ highly defensive approach. However, the Boro defenders often left their default position, resulting in the them conceding twice before half-time – something that happened in just three league games last season.

Ultimately, the frequent presence of fresh, proactive coaches and managers is likely to make the Championship much more entertaining. In turn, this may boost viewing figures, and prove that football beyond the upper echelons of the Premier League’s top-six really is worth watching.