Summer at the West London club saw the long-expected, but still drawn-out and bitter, exit of Antonio Conte. Stepping into his shoes is fellow Italian, Maurizio Sarri. The manager’s job at Stamford Bridge has become one of the most difficult in the EPL, with off-field politics, a seemingly unsettled and unhappy team, a reduction in the owner’s financial support, and increasingly unrealistic levels of expectations from the team’s fanbase. So, just who is Sarri, what is the state of the club he is taking over, and what does he bring to the role?

The State of Play

On the surface, last season was disappointing—the most crucial factor being their fifth position finish, resulting in their failure to qualify for the Champions League. They did, of course, win the FA Cup, something that Spurs and Manchester United would have loved to have lifted. With those two clubs, it would have been the icing on the cake of a season of improvement. With Chelsea, however, it is more a case of papering over the cracks. It also heaps a little more pressure onto the shoulders of Sarri, as he will need to improve on his predecessor’s final season in the role. Qualification for the Champions League is imperative. The bookies currently have the Blues as fourth favourites to win the league, so if it goes to expectations, he may well achieve that.

Chelsea’s summer transfer activity has been disappointing, and their season may well hinge on the departures to Europe of some of their seemingly-wantaway stars, as the transfer window over the channel is still very much open. Other than Rob Green (who is there merely to tick the home-grown box), they have only brought in Jorginho. However, England’s Ruben Loftus-Cheek, back from loan at Palace, will be like a new signing and could be a key player.

The first thing that jumps out when you look at his track record is just how many clubs he has been in charge of. Chelsea is his 16th club in just 22 years. A cynical view would be that this alone makes him an ideal candidate, bearing in mind the number of coaches who have held that role under Roman Abramovich.

The Neapolitan, like several of his fellow coaches in the game, did not have a career in professional football. He began his coaching career in the lower reaches of the Italian footballing pyramid—one that, don’t forget, deteriorates a lot quicker than the English one in terms of quality and pressure. His track record at that level was mixed, to say the least.

Into the Big Time 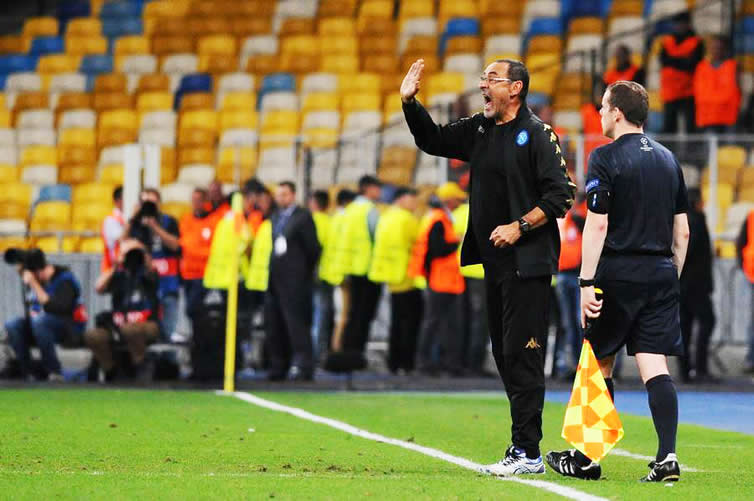 The summer of June 2015 saw the pivotal step in Sarri’s career. Out of work since being dismissed from Sorrento in December, he was appointed at Empoli. The Tuscan club were in Serie B, having dropped down six years prior. In his first year, he took them to second place and automatic promotion, then kept them in the Italian top flight the following season. His success brought him to the attention of the larger clubs, and when Rafael Benítez left Napoli at the end of the 2014/15 season, Sarri was appointed the head coach at the city of his birth.

No matter what had happened before, Sarri’s tenure at Napoli can only be looked at as a success. He finished runners up twice and third once, qualifying for the Champions League each time and winning the “Campioni d’Inverno” (“Winter Champions”) twice—the first time they had achieved that for more than a quarter of a century. Sarri also won the Coach of the Year award.

What will he Bring?

His list of achievements and honours may not look impressive when held up against some of those he will be competing against, but, significantly, he has two key attributes. He has developed a slick, exciting style of play that will be welcomed at Stamford Bridge and has also proved to work well in England’s top flight. He has also shown an aptitude in the transfer market for buying well, often eschewing the big names and opting to strengthen those areas that need strengthening for relatively small sums of money. If he can continue to do both of those at Chelsea, he will be in the unusual position of pleasing both the fanbase and the man in charge—something that his previous incumbents have struggled to do.