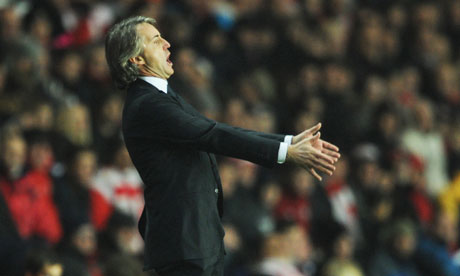 Posted in Chelsea By By Far The Greatest TeamPosted on December 23, 2015January 30, 2017Tagged Chelsea

In a shocking turn of events, Chelsea have enquired for the availability of Inter Milan manager Roberto Mancini. The London, last week, hired Dutch manager Guus Hiddink on an interim basis to replace Jose Mourinho, but the search for a long-term replacement is still on-going.

Several names have been linked with the post at Stamford Bridge, and now the latest one is of Mancini.

According to FcInterNews.it, Chelsea owner Roman Abramovich considers Mancini to be one of the candidates to take charge of the Blues in next season. The report states that the Blues have already approached the Italian with an offer including wages worth €8.5m per season.

The initial deal offered to Mancini is considered to be a two-year contract worth £17m.

Mancini has led Inter to the summit of the Serie A table, but latest reports have suggested that he was involved in a bust-up with his players following the defeat to Lazio.