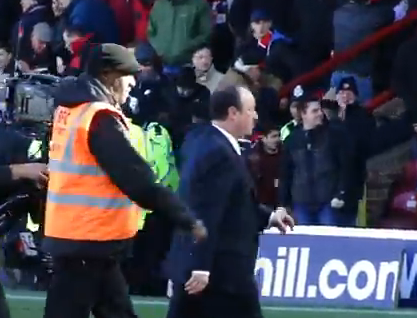 In this column, we focus on one manager and his decisions before, during, and sometimes after a match. We (and other writers) analyze the decisions and results as if choice works out as it is supposed to. If a club wins, the manager made the right choices; the converse is also true. Sometimes, though, luck intercedes and makes what is a dumb decision pay off. Such is the case for Rafa Benitez and Newcastle, who escaped from the Molineux with a 1-0 victory over Wolves.

Going into the match, Newcastle knew they would go top of the Championship with a victory. They also knew Paul Lambert’s side was in form and had defeated them early in the season by a 2-0 score. Newcastle continue to miss Dwight Gayle as the main scoring threat so Benitez went with a 4-4-1-1 with Aleksander Mitrovic up top as the central threat. This was despite the Serbian striker not having scored a league goal since October 29.

The formation was a traditional line-up trying to counter Wolves more aggressive 4-2-3-1. Newcastle reinforced the midfield. When they did go on the counter, they would try to work the wings and find someone cutting inside.

The first half was engaging but Newcastle’s more cautious approach worked. Wolves had more of the possession and better chances, but the match was scoreless. The major concern was Mitrovic. He was shown an early yellow card and had a very poor game. He was not the central striker the formation needed, failed to get behind the defense, and had some rash challenges.

Managers tend to think in “group think.” Substitutions must be made at the optimal times – 60th minute, 70/75 minutes, and depending on the situation in the 80th or later. Rarely does a manager make a first half substitution except for injury, even if a player is rubbish. In this case Mitrovic was rubbish and in danger of seeing red. Yet Benitez gambled by keeping him on and holding out until halftime, when he could substitute him, if not later.

The gamble came very close to backfiring. Mid-first half Mitrovic tried to settle under a pass over the top near goal. The pass missed but the Serbian scraped his raised boot across the Achilles of keeper Carl Ikeme. While Mitrovic writhed on the ground, referee Craig Pawson stood over him considering his course of action. In the end, no cards were given.

Fate was cruel to the home side. Late in the first half, a scramble inside the box found the ball at Mitrovic’s feet. His strike was straight on and Newcastle used the goal to set their stout defense. Mitrovic was substituted off in order to protect him from earning a second yellow, and Newcastle played much of the second half with six midfielders to slow down the Wolves attack.

As the saying goes, sometimes it’s better lucky than good on the day.

VIDEO: Benitez’s attack on Chelsea fans and board

Chelsea fans direct anger at Rafa… but not Abramovich?