Skip to content
Posted in Statistics By By Far The Greatest TeamPosted on August 7, 2012June 30, 2017

When it comes to surviving in the Premier League, managers and pundits alike will often speak about reaching the magical 38-point mark. It is very rare, however, to hear talk of how many points will be needed to attain any other positions.

With that thought in mind, I decided to look back through the Premier League archives and investigate just what it takes to finish anywhere from first to last in the top division of English football.

The following table matches total points to final finishing positions in each of the last 17 Premier League seasons. Please bear in mind the following couple of things when looking at it: 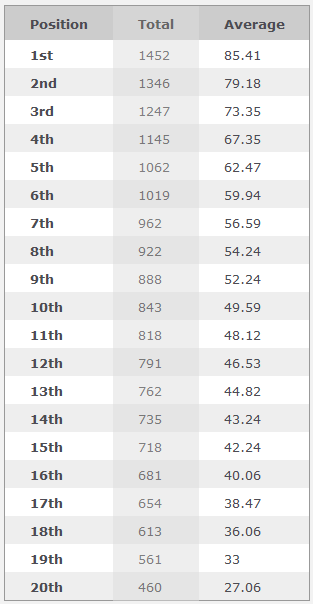 The ‘Average’ column is the key one here as it provides a decent indication of what is needed to finish where. We can see for example that 85 points will put you firmly in the title mix, whilst anything around the 36-point mark could leave you in trouble.

A summer of managerial changes and transfer activity means that what happened at the back end of the previous campaign is no guarantee of what is yet to come, though it does make for interesting reading. Therefore, excluding the newly-promoted trio of Reading, Southampton and West Ham United, I have decided to look at just how many points each of the remaining 17 Premier League clubs would pick up next season if they replicated their form from the final ten games of 2011/12 over the entire course of 2012/13. 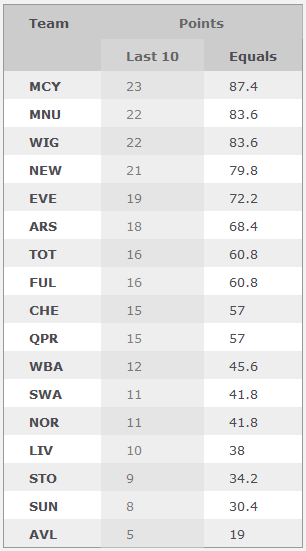 By comparing these numbers with those found in the ‘Average’ column of my earlier table, we can see exactly what type of season each team is on course to have. 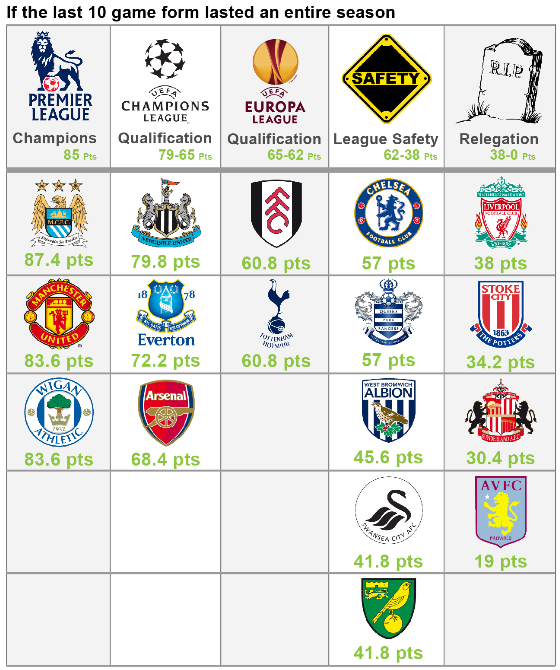 This is essentially just a bit of fun, but it does show the size of the tasks facing Paul Lambert and Brendan Rodgers in their new jobs at Aston Villa and Liverpool respectively. Their former clubs, Norwich and Swansea, will have to be aware of ‘second-season syndrome’ under new management, whilst Wigan will hope to continue to punch above their weight at the top end of the table.