Arsenal played some brilliant football throughout the 2014-15 Premier League campaign and finished third after a phenomenal run during the second half of the season. The Gunners also defended their FA Cup crown as they held off a spirited fight from Tim Sherwood’s Aston Villa to secure back-to-back domestic titles. Arsene Wenger’s side have improved significantly in recent years and will be looking to challenge Jose Mourinho’s Chelsea for the league title. The Gunners snatched experienced goalkeeper Petr Cech from the Blues earlier this summer and are well placed for a championship challenge.

There is one key area where Arsenal can improve – attack. While France international Olivier Giroud is more than competent as the lone striker, he fails to inspire the confidence of a truly world class striker. According to reports, Real Madrid’s Karim Benzema – Giroud’s team-mate for the national side – is Wenger’s top transfer target for the coming months and the Gunners will remain patient in their pursuit of the 27-year-old. Their title aspirations would certainly be boosted if they could bring Benzema to the Emirates Stadium, but would he make them favourites for the Premier League crown? 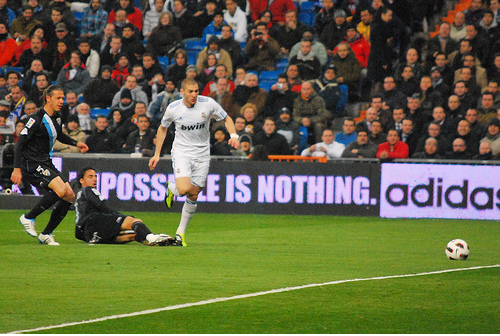 Karim Benzema IS a world class striker. The Frenchman has helped Real Madrid win numerous trophies during his time at the Santiago Bernabeu, including the Champions League back in 2014. However, many have suggested that his time in Spain is limited and he may opt for a move to the Premier League in the near future. Arsenal have been linked with the striker on a number of occasions throughout the past few seasons but this may be their first genuine opportunity to tempt Benzema’s hand and bring him to the Emirates Stadium.

Benzema is one of the sport’s best finishers and would offer Arsenal a new dimension up front. The Real Madrid striker has the ability to run the channels and would form a deadly partnership with the likes of Alexis Sanchez and Theo Walcott in Arsenal’s rapid attack. Furthermore, it is important to remember that Benzema played with Mesut Ozil at Real Madrid and both players will know how the other operates. Meanwhile, Olivier Giroud has welcomed a new addition at the club and could raise his game due to the increased competition in attack. Benzema is comfortable with both feet and would certainly play a key role in Arsenal’s attack throughout the campaign and his goals could ultimately prove to be the difference in the title race.

It could be argued that Arsenal’s most important purchase this summer has already taken place. There are plenty of reasons why it was crucial that Petr Cech’s move to the Emirates Stadium happened but none more so than Arsenal’s need for a world class shot stopper. At 33 years old, the Czech Republic goalkeeper is experienced yet remains one of the best in the Premier League. In fact, if Jose Mourinho had it his way, Cech would still be a Chelsea player. His knowledge, understanding and experience of the English game made him a must-buy and Arsenals fans can now say that they have a top quality goalkeeper for the first time since Jens Lehmann’s time at the club.

Cech has won four Premier League titles at Stamford Bridge and is more than capable of leading Arsenal’s defence throughout the next few seasons. He is a tremendous shot stopper and has maintained an excellent performance level during his career. He remains an extraordinary goalkeeper and, for an estimated fee of £10 million, was a must for Wenger’s side. Not only does this mean that the Gunners have him in their ranks, but Chelsea are deprived of a phenomenal backup goalkeeper. The 33-year-old played his part in Arsenal’s Asia Trophy success last week and will play a huge role in their potential achievements throughout the season.

However, the Gunners are still in need of that striker who can emulate the likes of Thierry Henry, Nicolas Anelka and Dennis Bergkamp and fire Arsene Wenger’s side to the Premier League title. Olivier Giroud was instrumental throughout Arsenal’s exceptional run of form at the back end of last season but he falls short in too many categories. The 28-year-old is more than capable of producing moments of quality but he regularly fails in the big matches – something that Benzema wouldn’t do. Giroud, who netted 19 goals in 37 appearances in all competitions last term, would be a brilliant player to bring on and his physicality would certainly cause problems for opposing sides as they tired later in matches.

With the addition of Benzema, Arsenal’s starting XI would rival that of Premier League champions Chelsea, Manchester City and Manchester United. Their midfield unit is one of the strongest in world football and the likes of Alex Oxlade-Chamberlain, Theo Walcott, Santi Cazorla, Aaron Ramsey and Mesut Ozil can all slot into a number of roles in Wenger’s side. The Real Madrid forward is lethal – particularly on the counter-attack – and would give Arsenal a constant danger up front. Benzema would flourish as the main central attacker with Alexis Sanchez and Walcott on either side. At the time of writing, Benzema is priced at 3/1 with betfair to join the Gunners in the upcoming transfer window and Arsenal supporters will certainly be hoping that Wenger manages to bring the striker to the Emirates Stadium in the near future. 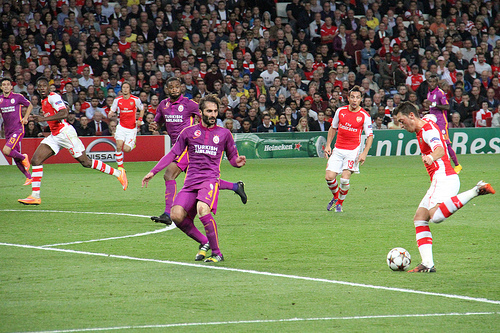 Chelsea will be strong, Manchester City will be strong and Manchester United will be strong, but so will Arsenal. The Premier League remains one of the greatest competitions in world football and all four teams are capable of lifting the title this season. However, the Gunners will certainly be confident of their first domestic title since the ‘Invincibles’ lifted the trophy at the end of the 2003-04 season. If Karim Benzema joins the club, and with a bit of luck, Arsenal could well go on to earn silverware at the end of the upcoming campaign.