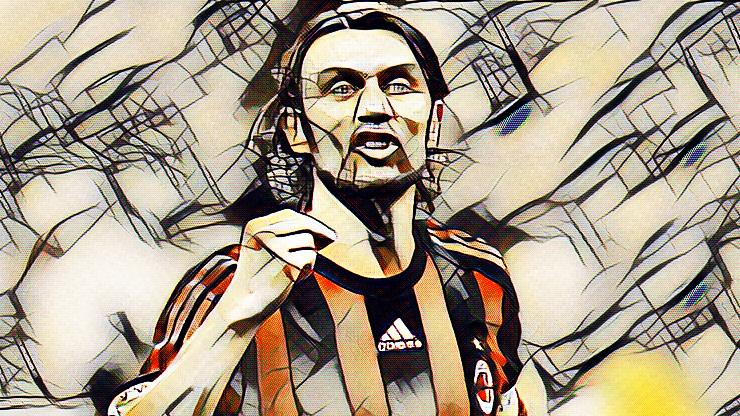 In June, Paolo Maldini made his professional tennis debut on the ATP Challenger Tour in Italy, aged 49. He and his partner lost a doubles match in straight sets, 6-1 6-1. However, it proved what we already know from Maldini’s football career, he has the mentality of a true champion. To have conquered one sport and move on to another at that age shows the hunger of a winner who is never satisfied. Whilst his short-lived tennis career ended in a defeat, to even reach a professional level in the first place was already a victory.

Age in sport and a player’s ‘prime’ has always been something Maldini has laughed in the face of. He made his AC Milan debut in the 1984-85 Serie A season, aged 16. Son of Cesare Maldini, former captain and manager of Milan and Italy, it was almost destined that Paolo would inherit his father’s place as a rossoneri.

He forced his way into the first team the next season, aged 17, in a famous Milan side including Ruud Gullit, Marco Van Basten, Carlo Ancelotti and Daniele Massaro. Maldini staked his claim for a place in a defence which boasted the likes of club icon Franco Baresi, Alessandro Costacurta, Mauro Tassotti and Fillipo Galli.

At this point in the club’s history, to even win a place in Milan’s first team would be a real test of mentality. For Maldini to think at such a young age that he deserved a place in Arrigo Sacchi’s ‘Immortals’ was a testament to his mindset.

“He was very young, so I tried to give him advice. But he needed very little, he was already a great player.”

Gullit, one third of the famous Dutch trio at Milan, was also impressed, speaking in 2007 he said,

“In my mind, Maldini is still the 18-year-old guy I first played with when I came to Milan, but he is still going. I’m not surprised because even as a kid he stood out.”

For the national team, Maldini became captain aged 26 after Franco Baresi’s international retirement in 1994. Despite not having any major international success, Maldini would make 126 appearances for the Azzurri, a record until it was overtaken by Fabio Cannavaro. Two years later when Baresi retired from club football, he inevitably took his place as captain of the team.

One of hallmarks of a true champion is Maldini’s consistency from the start of his career and throughout. Similar to players such as Ryan Giggs and Carles Puyol, he had the professionalism to look after his body which would be a vital factor in a career which lasted until he was 41-years-old.

Maldini was omnipresent in different eras of Milan’s history. From Sacchi’s famous team in the 1980’s, through success and transition in the 90’s, all the way through to another legendary Milan team in the mid-2000’s, Maldini became a symbol of the club. For 16 seasons straight, he never made less than 26 Serie A appearances, testament to Maldini’s dedication to his body and the team.

The way he conducted himself off the pitch and his style of play could be defined as ‘elegant professionalism’.  On the pitch, Maldini was the definition of composure, using his athleticism to burst down the wing and deliver pin-point passes and crosses. Later on in his career, he would rely on impeccable positioning and timing of tackles. His cool demeanour also emphasised his role as a leader on pitch, leading by example throughout the generations of Milan players.

A statistic which sums this up is the fact that in 902 appearances for Milan, Maldini picked up only three red cards (take note Sergio Ramos). His style was so smooth that Ronaldinho said it was “more of a stylish midfielder than a defender.”

In 2007, just shy of 39-years-old, Maldini won his last Champions League. At an age where the majority of players have their feet up years after retirement, Maldini was leading his side to his fifth Champions League, incredibly this is equal to or more than any club except Milan and Real Madrid.

Not that he is any stranger to incredible records, Maldini also won seven Serie A titles in his 25-year career at Milan, retiring in 2009. He also holds the most European competitions appearances (168), most Champions League finals played (8), most Serie A appearances (647) and most World Cup minutes played (2216).

There are not enough ways to compliment Maldini as not just a great of the game, but what he symbolised as an icon of AC Milan and as a role model for any footballer. Perhaps the best quote is also the most concise, from another great, Ronaldo,

“He was the best defender I ever faced over the course of my career.”