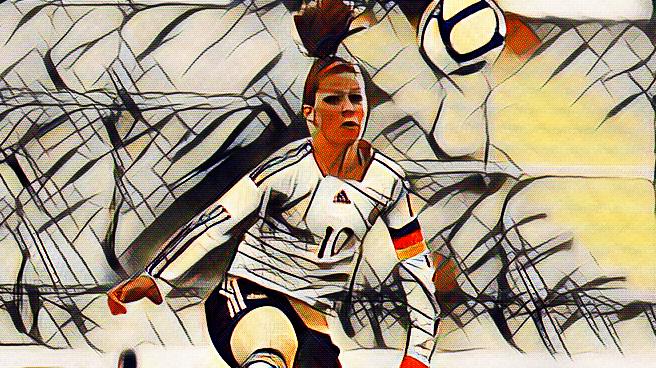 “We have to be serious: The men’s football is on the highest level. We should not try to ask for the same level of attention. We should try to bring our game to the best possible level. If we manage this, we will succeed also outside the pitch.” Melanie Leupolz is one of Germany’s finest midfielders in women’s football and at just 24 years of age still has the world at her feet. At 19 Melanie was part of the European Championship winning squad that triumphed over Norway 1-0 in Solna, Sweden in 2013. In 2015 Melanie played a much bigger role in helping Germany reach the semi-finals of the World Cup in Canada but lost 2-0 to eventual winners USA. The Olympic Games in Rio saw Melanie taste more success as Germany won gold with a 2-1 win over Sweden in 2016.

A glittering international career that is only missing a World Cup medal keeps Melanie hungry but at club level she has already tasted Bundesliga success on two occasions with Bayern Munich after moving from Freiburg in 2014. Injuries have hampered Melanie’s progress of late with an ankle and knee injury meaning she has meant periods of time out of the game.

I was fortunate enough to be able to sit down with Melanie before the 2016 Olympic Games and talk football.

(David) When you were younger did you ever think to yourself “I’ll play for the biggest club in Germany and represent my country in the World Cup”?

(Melanie) “I can imagine myself as a little child, playing soccer in the garden, wearing a Bayern Munich dress as I admired the club. But at this time playing for Bayern Munich and even for the German national team was only a big dream, nothing which seems reachable. I just loved to play soccer from the first moment on.”

(David) How did your career in football start?

(Melanie) “Well, next to my family house there is a football pitch. And all of my friends used to play there. So they just took me there. And I went back to the pitch every day, became member of the local club and part of the boys team I used to play with for nine years.”

(David) Were you interested in other sports or hobbies when you were younger? Did you have to choose between them and football or are you still able to do them all?

(Melanie) “I was always into soccer. As a child I did not go anywhere without a ball. Even when my parents wanted to go for a walk with me I took the ball with me!”

(David) Is there anyone on or off the pitch that inspired you or that you’d consider a role model?

(Melanie) “No, not really. I always try to focus on myself and only my path I will take.”

(David) You started off at Freiburg. How would you look back upon your time there?

(Melanie) “I am still thankful for the time I had there. Freiburg gave me the chance to play in the Bundesliga at a young age. They put a lot of trust in me. I became a national player during this time. It is a perfect club for young talents to develop. I still would recommend young players to sign with Freiburg.”

(David) When Bayern Munich made it known that they wanted to sign you, how did that make you feel? Was it a difficult decision to leave Freiburg?

(Melanie) “I remember the day when Bayern coach Thomas Wörle called me for the first time. I was a bit shy. Some weeks later I drove with my family and my agent to the trainings ground to have a look around. Afterwards we had another great talk with Thomas Wörle. On my way home I knew: This is the ground I will be training on in the coming seasons. After four years in Freiburg I wanted to make the next step. I felt ready for Bayern Munich. The club really put effort into signing me and had a clear plan with me and the whole team. Now I can say that it was a perfect decision. We became champions twice in a row. I play for a club which can win big trophies. That is what I always wanted.”

(David) What are the big differences between the two clubs?

(Melanie) “Bayern Munich is a bit bigger in everything, more professional. And in contrast to Freiburg you are supposed to win every match, even if it is a friendly. It is a hundred per cent winning mentality.”

(David) What has been the highlight of your career so far?

(Melanie) “Winning the championship in Germany for the first time in 2015 was something very special. I guess this is one of the moments in life I will never forget. As it happened so unexpectedly. And at the same time it motivated me to win even more as you always want to get this special feeling back once you have experienced it.”

You didn’t feature for Germany at the She Believes Cup, was that down to an injury you were recovering from?

(Melanie) “Unfortunately, I got injured the week before the She Believes Cup started. It was so hard for me to call our national coach and tell her that I will not be able to play. But retrospectively it was the right decision as I could help Bayern Munich at the end of the season to become champions again. And now, I am one-hundred per cent fit for the Olympics.”

(David) Goals for the Olympics?

(Melanie) “The Olympics are my third big tournament already and, of course, I have developed as a player and a person. But I am never satisfied. I always aim high, I always want to become better, I always want to win. That is why for myself the Olympic idea, that taking part is the most important thing does not go far enough. If I play football I want to reach the most success possible.” (David) How would you describe the women’s football structure in Germany? Is women’s football getting the kind of recognition that it deserves? Do you think it will ever have the same level of attention as the men’s game in the future?

(Melanie) “It is on a good way. But we have to be serious: The men’s football is on the highest level. We should not try to ask for the same level of attention. We should try to bring our game to the best possible level. If we manage this, we will succeed also outside the pitch.”

(David) When you look back at your career many many years from now, what would you have liked to have achieved in the game?

(Melanie) “I am a very here and now person. That’s why I do not have these kind of thoughts in my head. I know that I can achieve a lot when I focus on my daily work. If I do so I am sure that I will look back at my career very happily in many years.”

(David) Do you have an advice for young women in Germany or across Europe who want to become footballers?

(Melanie) “As mentioned, I only played in a team with boys for a long time. This is what I highly recommend every girl who wants to achieve the highest goals in football. You learn so much more by playing with boys. It makes you better and stronger. Besides, it is important that kids start to train their left and their right foot as early as possible. And what is above all this is passion and fun. You really need to love what you do. I’ve never had a day when I did not feel like playing football. This motivation has to come from inside yourself!”

Melanie is as impressive off the field as she is on it. Grounded in her approach but most importantly loves what she does. She is an inspiration to many young women in Germany who’d like to play football at the highest level.

I enjoyed talking with her and I hope you enjoyed reading it!