Skip to content
4 Comments on Have Chelsea captain and manager kissed and made up after JT got Mourinho sacked?Posted in Premier League By By Far The Greatest TeamPosted on June 4, 2013June 28, 2013Tagged Chelsea, Claude Makelele, John Terry, Jose Mourinho 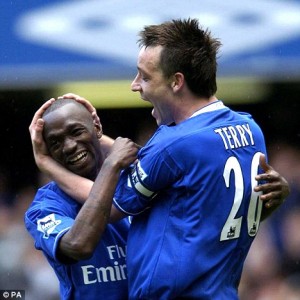 Claude Makelele published an autobiography in 2009, ‘Tout Simplement’, which revealed that the reason behind Jose Mourinho’s dismissal in 2007 was John Terry. After being told that he was going to be dropped, a disgruntled Terry apparently went to complain about the manager to Peter Kenyon and Roman Abramovich. Then he gave the club an ultimatum, claiming he would hand in a transfer request if Mourinho wasn’t dealt with.

Makelele wrote: I got the news from Didier Drogba. ‘He’ll be sacked tomorrow,’ he told me. I was so surprised. I thought Mourinho was practically untouchable … The next morning at Cobham, our new training centre, it was chaos. There were photographers everywhere, journalists trying to get in touch with me, even helicopters flying over our heads.

Most of the players were together in the changing rooms. I met Rui [Faria], our physical trainer, and asked him if everything was OK. ‘No, no Claude. The rumours are true. The coach has been fired.’ I asked him why and he explained a lot of players had complained about him, notably John Terry. I then learnt Mourinho had told the club’s captain that he was going to be left on the bench for a few matches to give him enough time to recover from a back operation he’d undergone in the middle of the previous season [in December 2006].

John let it be known that he was OK to play on but Mourinho insisted. He told him his [Terry’s] level of performance was suffering because of his back problems and repeated clearly that he [Terry] would be replaced until told otherwise. He even pointed out that the central defence would, from now on, be Ricardo Carvalho and Alex. War had been declared.

For John this was treason. He believed – rightly, in my opinion – that by giving his all in the second half of the previous season, even though he was in great pain, he deserved more playing time in order to find his optimum playing level. Mourinho had provoked a ‘clash’ too far. Had it been me, [Michael] Ballack or [Andriy] Shevchenko it might have passed but, if there is one person who is untouchable at Chelsea, then it is John. And Mourinho knew.

So why take such a risk? Because he’d had enough and was looking for a way out? As it was always, when John Terry let his unhappiness be known to [the chief executive Peter] Kenyon and asked him for a transfer, Abramovich reacted immediately. The departure of Terry was unimaginable from the point of view of the supporters, the players or the owners. Mourinho was asked to pack his bags.

The club and captain were quick to deny Makelele’s claims and a few stories circulated in the press that Terry was going to sue Makelele, but nothing ever came of that.

Chelsea released a statement: “It is not a true version of events with regard to the transfer request as there wasn’t one. Nor was the captain responsible for Mourinho’s departure. Jose’s departure was mutually agreed between him and the club.”

That wasn’t Mourinho’s version of events though. At the end of the 2006-2007 season, after failing to seriously compete with Manchester United for the title, Mourinho was asked about his future. “There are only two ways for me to leave Chelsea,” he said. “One way is in June 2010 when I finish my contract and if the club doesn’t give me a new one. It is the end of my contract and I am out. The second way is for Chelsea to sack me. The way of the manager leaving the club by deciding to walk away, no chance! I will never do this to Chelsea supporters.”

Mourinho was sacked a few weeks in to the following season though and at the end of that season, with Mourinho still out of work, he confirmed that he didn’t leave by mutual consent, as the club had claimed, rather that he had been sacked.

“I made a mistake not to leave Chelsea at the end of last season,” he said. “I had an offer from one of the greatest clubs in Europe but I preferred to stay in London because I promised the fans that I won’t leave on my own initiative, and four months later I was fired. Now I understand that I probably shouldn’t have missed such an opportunity.”

Speaking as manager of Inter Milan in 2010, he again reiterated this point, and argued he’d done more than enough to keep his job.

“I feel sorry because, when I look at the big four teams while I was in England, [their managers] are all there,” he said. “Sir Alex Ferguson is here. Arsene Wenger is here. Rafa Benitez is here. I did more than enough to be here. But the decision was made.”

When denying Makelele’s stories, Chelsea lied and claimed Mourinho hadn’t been sacked. It’s safe to assume they could also have been lying about Terry’s involvement in Mourinho’s dismissal then. After all, what reason would Makelele have to invent the story?

Have Terry and Mourinho have made up since then? Or is Terry’s opinion just not that important to Abramovich these days?