Edinson Cavani has been in terrific goal scoring form so far this season, and this week was no different as he helped fire Paris St Germain further clear at the top of the table. Elsewhere, Strasbourg gained only their third win of the season, whilst Monaco were held to a draw at Amiens.

Lille have been struggled so far this season under the stewardship of Marcelo Bielsa, but made it two wins from two either side of the international break, after a comprehensive home victory over St Etienne. The opener for the home side came just 20 minutes in, when Nicolas Pepe headed in past Stephane Ruffier after connecting with a sublime, arching ball in from El Ghazi.

The home side continued to press; eventually getting their reward in the 71st minute. A deep cross into the box was cleared only as far as Thiago Mendes, who whipped a venomous, curling effort past Ruffier.

Five minutes before full time, St Etienne should have equalised. Jonathan Bamba threaded through Pajot just inside the box, but the midfield blasted over when he really should have done better.

Lille capitalised on the miss as they headed down the other end just four minutes later. Anwar El Ghazi teed up Ezequiel Ponce, who rifled in at Ruffier’s near post to wrap up the three points. The win for Lille sees Bielsa’s team remain in touching distance of a mid-table place, while St Etienne remain in sixth.

In the other game on Friday, Monaco’s title challenge took a blow after they were held to a draw away at struggling Amiens.

It was the home side who took the lead on the half hour mark, after a lightning break away from their own half. Gael Kakuta threaded through Serge Gakpe, whose impressive pace was enough to hold off the Monaco defence, and the wide-man drove a low shot home past Subasic.

Amiens impressive performance continued just after the interval, when they really should have made it two-nil. Gael Kakuta whipped in a dangerous cross into the six-yard box, but Moussa Konate could only head over from close range.

Leonardo Jardim brought on Stevan Jovetic on the hour mark, and the former Manchester City man grabbed the equaliser. Impressive work from Youri Tielemans saw the Belgian youngster pass across to Jovetic, who found the back of the net.

Monaco couldn’t find a winner, meaning that PSG’s win increases the gap between the two teams, whilst the draw means that Amiens remain in 19th place.

PSG increased their lead at the top of the table to six points, after a comfortable home victory over fifth-place Nantes. Brazilian star Neymar was overshadowed by the prolific Edinson Cavani, who added two more goals to his season’s tally.

The first goal for the Uruguayan came in the 37th minute, when Javior Pastore passed across to Cavani, who steadied himself before driving home at Tatarusanu’s near post.

The league leaders’ second came from bizarre circumstances, when Angel di Maria received the ball back from a short corner, before driving in a low cross. The delivery bounced once inside the six-yard box, before finding its way into the bottom corner, with no other player managing to get a touch to it.

Nantes improved in the second half, and gained a foothold back into the game on the hour mark. Leo Dubois received the ball at the back post, before playing it across to Nakoulma who was left with a simple tap-in past Areola.

However, just five minutes later, PSG proved while they are sitting comfortably at the top of the table. Marco Verratti fed through Javier Pastore who managed to drive a shot at Tatarusanu, who could only palm the ball upwards, and into the back of the net. And the leaders rounded off a good performance thanks to Cavani’s second of the game. The Uruguayan slotted home after the ball fell to his feet following a scramble inside the box.

A clash between two midtable teams ended in a comfortably victory for Dijon, who eased to a 3-1 victory.

It was the away side who took the lead, arguably against the run of play. Saif-Eddine Khaoui whipped in a corner that was met by the head of Suk Hyun-Jun, who fired a header home past Reynet.

However, the home side were back in the game just ten minutes later. Frederic Sammaritano fed the ball across the box, which was met by Jordan Marie, who fired towards goal. From only a few yards out, Marie hit the post, but Julio Tavares was on hand to tuck home for the equaliser.

After the half-time interval, Dijon scored twice in quick succession.

Kwon Chang-Hoon delivered an arching cross, which was dispatched brilliantly by Tavares, who steered home across Samassa. Kwon Chang-Hoon rounded off the game for Dijon, after he rifled home from outside the box into the bottom right corner. The result sees both teams remain in a comfortably mid-table position.

Despite Guingamp going down to ten men, they held out for a 1-1 home draw with fellow mid-table side Angers.

Abdoul Camara put the home side in front after 14 minutes, when Franck Tabanou drilled in a low ball which Camara tucked home at the back post. However, the away side equalised after Yoann Andreu drove a speculative shot towards goal that was deflected into his own goal by Christophe Kerbrat, after the defender failed to sort his feet out.

Lucas Deaux received his marching orders on the hour mark, but the home side held out for a gritty point. The result sees both teams remain in 14th and 15th respectively.

Struggling Strasbourg scored a late winner to seal a 2-1 over Rennes, who had Morgan Amalfitano sent off on the hour mark.

The home side have struggled so far this season, and remain in real danger of relegation. But they were the team to take the lead, on the half hour mark. Yoann Salmier let fly a speculative effort from 30 yards, which fell at the feet of Jeremy Blayac. The forward was quick to swivel, and drove home a low shot into the far corner.

Both teams pushed for an equaliser, with Strasbourg’s keeper pulling off a stunning save while backpedalling, to divert a powerful effort onto the crossbar and away. However, the home side gained another advantage, when Morgan Almalfitano was shown a straight red for a cynical lunge from behind, while racing down the touchline.

And the home side made their man advantage count, when Stephane Bahoken connected with a Dimitri Lienard cross, and directed it across Koubek and into the bottom corner.

A late finish from Adrien Hunou was to no avail, and Strasbourg held out for a crucial victory which sees them still in danger of relegation, but within touching distance of the likes of Dijon, Troyes and Guingamp. Rennes, meanwhile, sit in 11th place.

Mid-table Toulouse were held to a goalless home draw against Metz, who still sit rock bottom of the Ligue 1 table.

After some early pressure from the home side, Metz were reduced to ten men. Fallou Diagne looked to dribble his way past Andy Delort, but as he did so he lost control of the ball, before sliding in with two feet, leaving the referee no choice but to show him the red card.

The home side should have opened the scoring in the first half, when Andy Delort played the ball across the face of goal. Christopher Jullien latched onto the end of it, but as he fired towards goal, Thomas Didillon smothered his shot brilliantly at close range.

And in the 68th minute, Metz survived once again, as Delort’s brilliant ball in saw Yaya Sanogo acrobatically fire onto the crossbar. The away side clung on for a point, but still remain rock bottom of the table and looked doomed, even so early into the season. Toulouse meanwhile sit in tenth place.

High-flyers Caen grabbed a stoppage time equaliser to deny Nice all three points. It was the away side who took the lead five minutes before the interval, after a wonderful, patient passing move. A lofted pass was flicked on by Alasanne Plea with his head, which fell at the feet of Pierre Lees-Melou. The attacker steadied himself and lashed home past Vercoutre.

The home side came out after the interval with a much improved performance. And they were handed a route back into the game in the 67th minute, after the referee awarded a penalty following Maxime Le Marchand’s handball in the penalty area. Ivan Santini stepped up, but his penalty was well saved by Walter Benitez.

The pressure from Caen eventually paid off in added time, when Romain Genevois’ searching ball to the back post was volleyed home by Ronny Rodelin. The stalemate means that Caen sit in sixth place, while Nice still struggle to escape the relegation mire in 16th.

Third-place Lyon were held to a 0-0 draw at home to Montpellier, with poor finishing the key factor leading to the goalless stalemate. The best chance in the opening period fell to Lyon’s Houssem Aouar, who dispossessed Hilton inside the box, but could only fire into the side netting from a tight angle.

Paul Lasne lashed over a venomous effort for Montpellier after 20 minutes before Memphis Depay blazed over a presentable chance on the half hour mark, when the Dutch winger really should have done better.

In the second half, Montpellier were much improved, but struggled to force Anthony Lopes into a real save. The stalemate means that Lyon remain in third place, just three points behind Monaco, while Montpellier sit in eighth.

Marseille grabbed a stoppage time equaliser to share the spoils away at Bordeaux. The home side struck early on, when Nicolas de Preville received the ball and curled home in only the second minute. The home side’s pressure continued, and in the 19th minute it should have been two nil. Francois Kamano played the ball across the face of goal, but Younousse Sankhare could only fire over the crossbar from just outside the six-yard box.

The away side had the best chance early in the second half, when Morgan Sanson swung in a dangerous ball to the back post, that Florian Thauvin could only side foot narrowly wide.

Deep into added time, Jordan Amavi crossed into the box, but Kostas Mitroglou could only send his powerful effort well over the crossbar. But just as it looked to be all over, Marseille grabbed their equaliser. After a few headed flick-ons in the box, Morgan Sanson latched onto the ball and drove it home, hard and low down the centre. The draw means that Marseille sit in fourth place, while Bordeaux remain mid-table. 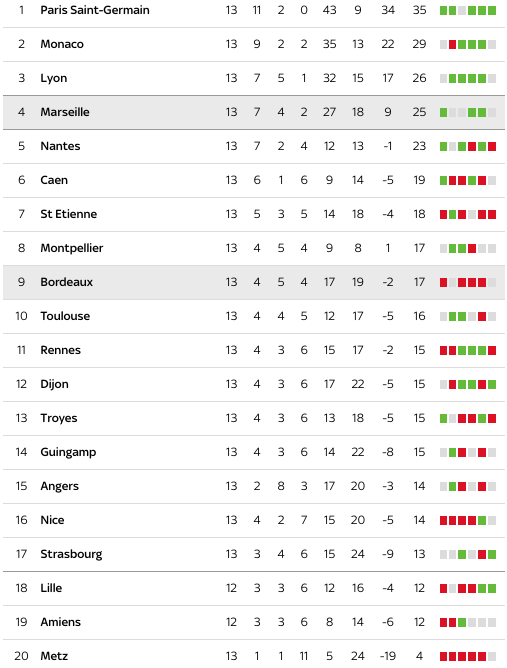