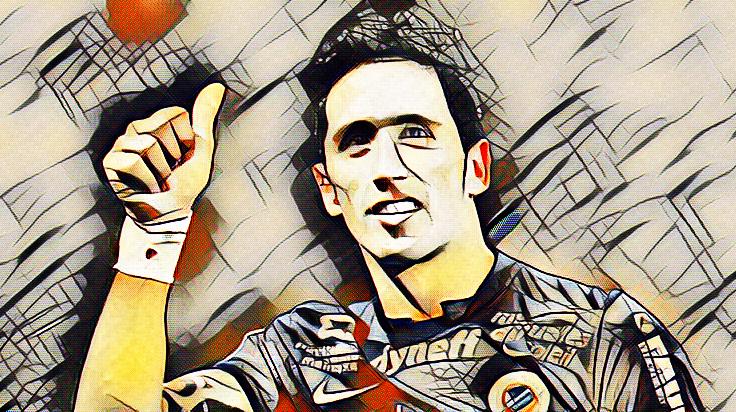 April 30, 2011. Dortmund. One win away from their first title in nine years, Dortmund had the chance to win the Bundesliga at home with two matches to spare, hosting 6th place Nürnberg. Jürgen Klopp’s young side began nervously. In need of some inspiration, Dortmund fans got their wish midway through the first half when Lucas Barrios reacted quickest in the box and slotted the rebound from Mario Götze’s shot past a helpless Raphael Schäfer to give Dortmund a lead they wouldn’t surrender. Barrios’ predatory goal put the exclamation point on Dortmund’s magical season.

Lucas Barrios had been sensational since arriving in Germany in 2009 from Colo-Colo in Chile. The perfect striker for Jürgen Klopp’s high-pressing style, Barrios combined hard defensive work with clinical finishing scoring 44 goals in his first two seasons in Europe. Join me as I look at how Lucas Barrios made it to the top and where he is now.

Born just 12 miles north of Buenos Aires, Barrios bounced around several clubs in his youth before ending up at Argentinos Juniors, the club that produced a certain Diego Armando Maradona. Despite scoring a respectable five goals in 17 matches during his debut season for the first team, Barrios was sent on loan to Tigre the following season. After failing to impress on loan, Barrios was deemed surplus to requirements at Argentinos Juniors. He then spent the next two seasons in the second division in Chile and Argentina respectively with Temuco and Tiro Federal with moderate success.

The determined striker’s big break came in 2006 when Barrios signed for Cobreloa in Chile’s top tier. 26 goals in 39 appearances later and interest in Barrios grew immensely with several clubs in Mexico linked with the striker. In July 2007, Barrios completed his €1.9 million move to Mexican club Atlas. Despite joining for a reasonable fee, Barrios made just three starts, scoring one goal in his time in Mexico.

Desperate for more playing time, Barrios returned to Chile just six months after moving to Atlas, joining Chilean giants Colo-Colo on loan. Back in Chile, Barrios experienced the best form of his career, scoring 37 goals in 38 appearances leading Colo-Colo to the 2008 Clausura title. The Chilean club were quick to make Barrios’ loan permanent and shelled out €1.5 million to secure his signature. Barrios’ form continued the following season as he began attracting serious interest from Europe, with clubs in France, Germany, Spain and Greece all reportedly interested in the prolific striker.

After months of speculation, Barrios eventually joined Jürgen Klopp’s Borussia Dortmund in July 2009 for a €4.2 million fee. Barrios failed to score in his first seven Bundesliga matches but once he did, the winner on match day eight against ‘Gladbach he didn’t stop. Barrios scored in the next four matches and ended the season with as the league’s third top scorer with 19.

The 2010-11 season is one that will be remembered forever by Dortmund fans. Barrios was spectacular as Dortmund romped to their first league title in nine years. 21 goals in all competitions as well as his all-around contribution made Barrios a wanted man throughout Europe. Despite links with a big money move to Chelsea to replace Didier Drogba, the reigning Paraguayan footballer of the year was convinced to stay in Germany.

But unfortunately a muscle injury in preseason meant Barrios missed the first nine matches of the season. By the time their inspirational striker returned, his place in the starting lineup had been taken by Robert Lewandowski (you may have heard of him). Barrios made just five starts throughout the entire campaign, still scoring a respectable five goals in 696 minutes of football. Dortmund strolled to a domestic double but Barrios played little part.

The arrival of Marco Reus and Julian Schieber the following season made Barrios surplus to requirements at Dortmund and the Paraguayan international signed with Marcello Lippi’s Guangzhou Evergrande in the Chinese Super League in the summer of 2012. A difficult 13 months in China followed. After starting well and winning another domestic double in his first season, he was often replaced in the starting lineup by new signing Elkeson in 2013. Barrios refused to return to China following international duty with Paraguay leading to strained relations between the player and club. Despite later attempts to reconcile, the damage had been done and Barrios joined Spartak Moscow in August 2013.

Barrios struggled mightily in Russia and was loaned to Montpellier the following season. For one brief season, Barrios looked like he could return to the kind of form that made him one of the most feared strikers in South America and Germany. Barrios scored 11 league goals as Montpellier finished 7th. Despite finishing the season as the club’s leading scorer, the club refused to take up their option to buy and Barrios returned to Spartak.

Barrios has spent the last couple years of his career in Brazil with Palmeiras and more recently Gremio. Although back in South America, Barrios has, albeit a decent goal return, failed to show signs that he can return to his peak. At 32, years of age, we may sadly have seen the best of Barrios.

At his peak, Lucas Barrios was unplayable, as his 96 goals in 136 appearances during the most prolific spell in his career (2008-11) showed. A hard-worker with a winning mentality, Barrios has a fine trophy haul collecting eight trophies in four countries. Barrios’ career, although hugely impressive, promised so much more. At his peak in 2011, aged just 26, Barrios failed to kick on, becoming something of a journeyman.

Now at the 13th club in his career, one can’t help but wonder what could have been had Barrios not lost his place at Dortmund due to injury or moved to Chelsea instead of China. For a few seasons though, Lucas Barrios gave football fans around the world real joy whenever he stepped onto the pitch.