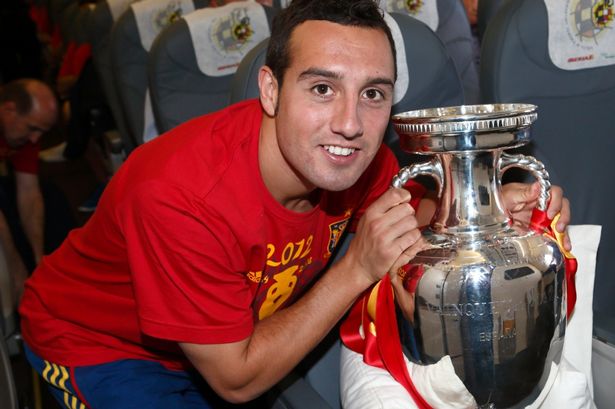 Santi Cazorla could be the one of the names to echo around Camp Nou, as the midfielder prepare to play against Barcelona in second leg of the last 16 on March 16. Cazorla is hoping to make a return to full match fitness from a knee injury that has kept him out since late November.

Cazorla, who picked the knee injury during his side’s 1-1 draw against Norwich Coty in November, is hopeful that he will be ready for action in less than three weeks to help his side in key games.

“I am eager to return. It is a pain to be on the sidelines and not have the chance to help your team, especially when there is a game like the one against Barcelona that everyone wants to play in. Hopefully I can shorten [the recovery process],” he told Spanish radio station Onda Cero.

“[Playing in the second leg against Barcelona] is the goal that I have. The knee is fine, I am working better every day. The aim is to set to return ([against Barcelona] but I’m not obsessed myself. I have to go day by day.”

The Spaniard is hopeful to help his side make it to the quarter final when they visit Camp Nou for the second leg.

“I want to go to Barcelona with the possibility of winning the tie. I do not want what happened in recent years, when Bayern Munich and Monaco effectively knocked us out in the first leg. I want to go to the Camp Nou with intact chances to go through,” he explained.

“A team like Arsenal always wants to go further in the Champions League. In recent years we have been knocked out too early. It is obvious that we face the best team left in. They are the clear favorites to go through because Barcelona are the favorites whoever they face. The team is optimistic but we have to be realistic and know that we will face a great team.”

Arsenal manager Arsene Wenger has confirmed earlier this month that he will be very pleased to have Cazorla and Jack Wilshere back in time.

The Frenchman is struggling to find a suitable replacement for the creativity and dynamism that Cazorla added the squad.

Reports have emerged that Wenger already have plans of including Cazorla in the Gunners’ Under-21 squad that will play against Wolves at the end of February to prepare him for first-team matches.
The Gunners will have a tough tasks to secure a place in the Champions League quarter finals after suffering a 2-0 home defeat to Barcelona.