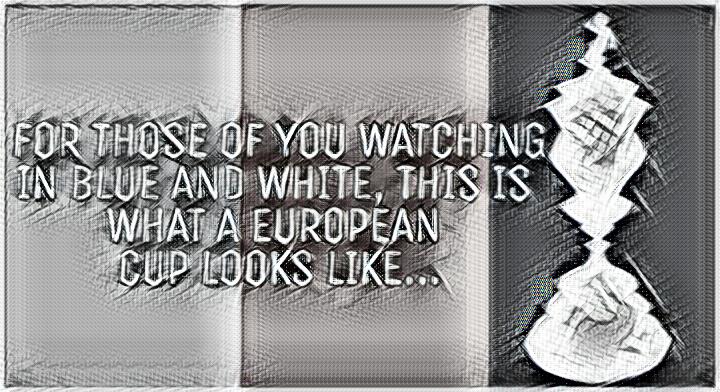 I may be hinging on a technicality with the question from my last post but who doesn’t love a technicality? The first British Club to win a European cup are, of course, Glentoran Football Club of Belfast. Glentoran are the proud holders of the 1914 Vienna Cup.

The Vienna Cup was one of the forerunners of pan-European competition. It was an idea that was pioneered by the Austro-Hungarian FA, initially through the Challenge Cup which was a tournament for clubs within the Austro-Hungarian Empire. The Vienna Cup is thought to be one of the first European competition that stretched further afield, extending invitations to clubs from the British Isles.

As Irish Cup Winners, Glentoran were invited to partake in The Vienna Cup alongside Burnley and Glasgow Celtic who were FA Cup and Scottish Cup winners respectively. The British sides were joined by Hertha Berlin, representatives from Bratislava and Prague and a Viennese Select XI.

The Glens were a team mostly made up of shipyard workers. The club lives proudly in the shadow of the famous docks that were responsible for the iconic Titanic amongst many others and this is where many East Belfast natives spent their working years. The Club set sail for Europe from Larne Harbour on Monday 18th May 1914 for what was surely an arduous journey, a fry cry from the modern European Giants of football with their private jets.

The highlights of this adventure for Glentoran were a 4-1 victory over Hertha Berlin and 5-0 win over the Viennese Select XI. The latter result sealing the victory for Glentoran to make the journey that much more worthwhile.

The Cup was not to continue due to the outbreak of War but it was certainly a precursor to what became the European competitions we know and love today. Glentoran retained ownership of the trophy as the only Vienna Cup champions and it retains pride of place in The Oval’s trophy cabinet today.

A century on Glentoran held commemorations to remember the famous victory and salute the thousands of local men who were to go off to fight in Europe on different fronts just months after the team returned home. The club had a specially designed replica kit made in the style of the famous shirt worn by the first British European Champions to be worn in a competitive league fixture by the team in homage to that great achievement one hundred years prior.

The big European journeys didn’t end there. There were many famous nights to come for the clubs from this fair land…