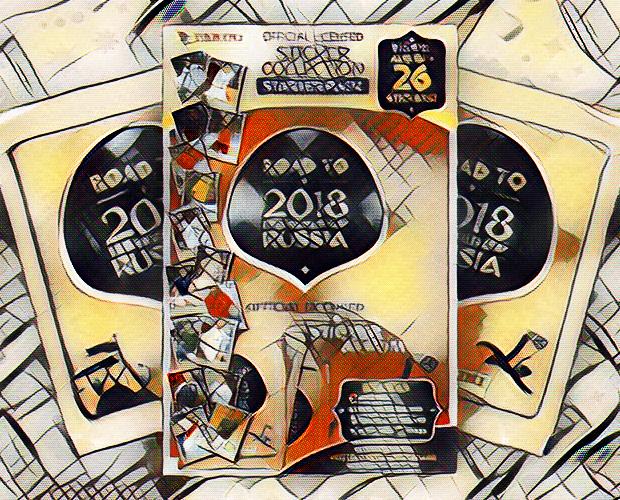 “Got. Got. Need” These three words have become synonymous with the cult classic which is Panini World Cup football stickers. These words are being said with more and more frequency in the past days due to today’s release of their new World Cup sticker book. The company was set up in Modena, Italy, 1961, coming to the UK in 1978 in anticipation of the Argentinean World Cup. The company has come a long way in the past five decades, with Panini now operating in over 120 countries worldwide. In 2016 their sales exceeded €631 million, on account of their European Championships 2016 sticker book. A lot has changed since the company set up shop all those years ago, but one thing remains constant. The innocence. The love. The sheer excitement of tearing open your packet, flicking through the mystery stickers, deliberating on that obscure 3rd choice Russian or Ecuadorian goalkeeper, trying to determine whether or not you have him, or being overjoyed at getting a coveted shiny sticker!

The Panini group does, of course, go beyond mere football stickers. They make trading cards for the World Cup, stickers and cards for classic Disney, the popular children’s series Paw Patrol, the Justice League series, as well as their own comic series. Their product range is large and diverse, but it is the football stickers that they are renowned for, and importantly to Panini, their biggest seller, albeit only for a couple of months every couple of years.

There has been some displeasure recently about the pricing strategy of the costs of packets, in anticipation for the 2018 World Cup in Russia. Germany 2006 was my first World Cup. Back then, ten year old me paid a mere 30p for a packet of stickers. Every pound of pocket money I got each week would be spent on three packets of stickers. They bumped up to 50p for the last couple of international tournaments and now, in the build up to the 2018 World Cup, a packet will cost 80 pence for five stickers. Obviously it is hard to compare as kids these days all seem to have iPhones and Ferraris rather than being overawed by the prospect of cheap football stickers, but it is a shame.

80p for five stickers really isn’t a lot. I get that. For the novice collector who will buy a few stickers here and there, it’s just under a pound. Big deal! You’ll spend a few pounds on the build up to the World Cup and if you’re lucky, maybe you’ll have your mum buy you a packet when she’s at the tills in Tesco! But these aren’t the people who are getting upset at the price hike by Panini. It’s the hard core collectors who are feeling very short changed!

The first Panini World Cup sticker album was brought out for Mexico 1970. This had 52 pages and 271 sticker slots to fill. These numbers have increased over the past few decades and unsurprisingly so, the cost of completing the book has increased also. The 2018 World Cup album will have nearly 650 stickers. In the build up to Euro 2016, many articles were written about the astounding cost of these stickers. It took one person to publicly outcry the ludicrous costs attached to this hobby to get the ball rolling by allowing everyone to realise how mad these prices were.

For this year’s World Cup sticker album, the costs would be as follows. Five stickers in a packet is the standard, and
there will be 650 stickers. It would take 130 packets of unique stickers to make this total up. 130 packets, at 80p a pop will total £104 to complete the official sticker album. That is a total that will make anybody with ambitions of completing their sticker book wince. And the worst part of this is that it isn’t doable. Or at least if the laws of probability are accurate then it shouldn’t be doable.

Doubles are a sad necessity of the sticker collecting world. Some people are lucky enough to have friends and family to trade with. The last World Cup and European Championship I was able to talk my flat mate’s into collecting stickers, along with my brother, therefore I was able to trade stickers which really took the burden off my wallet. World Cup 2006 was my first attempt at collecting and back then, I had very few friends in my class who were in to football (weird, right..?). Because of this, I have about 200 stickers in my room, Thierry Henry, Raul, Luis Figo and many, many more. Doubles are frustrating, but with the right player it can be okay to have a couple. The downside is when you have four copies of some obscure left back from Ivory Coast!

The worst part of the doubles, triples and, as much as I hate to say it, quadruples, is the added cost. While I said that if your sticker collecting game was incredibly lucky, you could complete the book for just over £100, the reality is that it will cost you much, much more. Prior to the 2014 World Cup in Brazil, two Swiss mathematicians worked out that factoring in the rate of getting duplicates, it should cost, on average, £450 to complete the book. This equated to 899 packets on average. This study was done without adding in the swapsies rule, but to many people, like myself back in 2006, swapping just wasn’t an option! Oh, and the worst part, with the price increase leaving a packet at 80p, the cost of this and the extra number of stickers see’s the cost of finishing this raise even further!

I have completed these books twice in my life, once in 2006 and again in 2010. I made efforts to finish it in 2014 and 2016, but financial reasons (being a student) saw me fail to finish it. I worked out a glitch in the system back in my early days. Buy the stickers online. Okay, so it wasn’t so much of a glitch rather than a perfectly legitimate was to finish the album, but it felt like cheating at the time. The idea was simple. Once you got a certain percentage through the book, you felt like you were wasting your money on stickers, you’d pay your 50p (30p, years ago!) and then you’d find your hard earned money was wasted on duplicates. So you’d go on the official Panini website and list the numbers of stickers that you needed. It felt shady, but doing it the official way just wasn’t cost effective.

For the 2018 World Cup there is a new way to play. Like most things in society, Panini has gone digital. Now you can download an app to swap and stick from the comfort of your couch, bed or toilet with ease. It’s great for the environment as it saves on paper and the digital nature means that you can’t damage the book – my completed ’06 book has Group D torn out, making it largely unsellable, not that I would ever dream of letting go of it!

Digital really seems to be the way forward for football stickers, and yet for me, it’s an absolute no. I am a traditionalist when it comes to the World Cup. I am still furious that the 2022 World Cup is being hosted by Qatar, as well as the fact that there are plans to increase the number of teams participating. It’s wrong. In a world where the game of football is changing, where speed trumps skill and where the atrocity of VAR is rife, the simplicity of a traditional sticker book is a safe space. It may not be environmentally friendly and it may be more expensive for all concerned, but I adore the tear into the packet. The smell of the pressed sticker. The pressure of sticking it in straight…

And that pressure is severe. I have sticker book pages with several perfectly placed stickers and one ever so slanted. It is infuriating! My 2006 book had the error of all errors. Two players in the wrong place. Like an absolute fool I somehow managed to swap Adriano with Ronaldinho. I panicked. I tried to pull out the sticker but it started to tear the page. I resorted to drawing two tiny arrows to show that the picture did not match the description. It was a farce.

But in a way, I am glad I messed it up. My 2006 World Cup sticker album had several pages torn out and delicately placed back in. I had a couple players mixed up in the wrong place, and I had countless players stuck in wonky. It is a finished album, and a finished album in pristine condition can be worth hundreds of pounds. Mine is worth nothing to everyone, expect me. To me, it is one of my proudest possessions and one that I have cherished for a decade, and one that I will cherish for the rest of my days. Yes, it is an expensive habit, and it is time consuming. It can cause family rifts (if trading and swapping gets hostile) and it is certainly not great for the environment – a lot of paper is consumed. But to me, collecting a sticker album in the build up to the World Cup is as much a part of the tournament as the opening ceremony, the early exit of England and the big final itself. If you have any genuine enjoyment for World Cup sticker collecting then you know the feelings attached to sticker collecting. Of course, it is frustrating getting a double of an unknown player, but when you compare it to the sheer elation of unearthing a bright shiny badge sticker to complete a page, there is no better feeling in the world. It’s simplicity is second to none. The cost of filling the book is ridiculous, the frustration is almost certainly not worth it, yet I know for a fact that I will be spending as much of my income as I can on filling that sticker book this summer. I am a fully fledged member of the Got Got Need club and I live for these international tournaments.