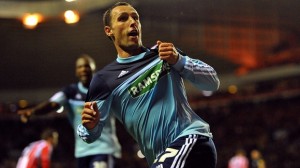 There were other things to do on Tuesday night. As storms lashed the Jersey shore, one of us – celebrating a wedding anniversary – walked like a man to see The Jersey Boys. Reading v Arsenal’s 12-goal thriller was on the telly and West Auckland beat Birtley Town 5-4 in a penalty shootout after sharing six goals. Pete Sixsmith did what he usually does and pitched up at the Stadium of Light. He left thinking his £15 might have been better spent …

For those lucky enough to be doing something else (watching The Jersey Boys, thrilling to Reading v Arsenal, cutting your toenails), Plan B was a change in midfield and the introduction of a second forward.

Both David Vaughan and Louis Saha have been promoted by this writer as possible answers to our problems. Both have looked useful whenever they have appeared. Both were seen as players who could seize the opportunities they were given.

After last night, where they were the most mediocre of mediocrities, they should be thinking very carefully about where they would like to go in January, because they failed to seize that opportunity and now can be seen as players who were never quite good enough (Vaughan) or, regrettably, past their best (Saha).

They were not the only ones and on the journey home I thought about the 15 point season and drew some comparisons.

Is Adam Johnson any better than Andy Welsh? Is John O’Shea’s distribution any improvement on Gary Breen’s? Is Carlos Cuellar any quicker than Danny Collins? On last night’s showing, is Steven Fletcher any more effective than Andy Gray?

All are rhetorical questions, but the fact that I was even thinking them is a serious cause for alarm, for believe me, this was as dismal as the F A Cup losses to Brentford and Notts County and made worse by the facts that we were comprehensively outplayed by local rivals.

Once they had established control, they used the ball, bringing their big barnstorming centre forward Ishmael (was his mum frightened by a great white whale?) Miller, who created the goal by running at Jack Colback and going on and on and on as Colback back pedalled.

A sharp cross to the near post and Scott McDonald was ahead of Cuellar to turn it in. From that moment on, we huffed and puffed but never looked like blowing the Boro house down.

The substitutions made little difference. Campbell came on and looked lightweight. McClean came on and looked as he has all season – poor. The ball was lumped forward in desperation, hoping for a Demba Ba moment but it was not forthcoming and the players departed to deserved booing, jeering and catcalls.

The manager was straight down the tunnel, presumably to collect his thoughts before speaking to the media. I would imagine that a darkened room and a cup of hot, sweet tea would have been necessary before he could face them and try to give some kind of explanation for what was a performance of such ineptitude that seasoned watchers were comparing it with the (very) dark days of Lawrie McMenemy.

We are in desperate need of a couple of wins. The more we draw, the more we slip down the table and the bottom teams are bound to start a little surge sooner or later. They can score goals – we can’t and the longer this drought goes on (a Sunderland player has not scored for 5 games) the more pressure is heaped on the defence. If we go a goal down, that is the end of the game because we create so little.

At times my frustration was vented on Adam Johnson, our marquee signing and the man who, it was hoped, would propel us to the heady heights of the top half of the table. He was pursued assiduously, welcomed as an almost prodigal son and has been a flop.

He cannot get past a man and last night, this current England player, was marked out of the game by Justin Hoyte (from the 15 point season!!) and a £150,000 signing from Doncaster Rovers, George Friend, who had a cracking game. Once again, Johnson was substituted and once again 30,000 people were left wondering what all the fuss is about.

I though Middlesbrough were excellent and played some very good football. It was neat and tidy, sharp and penetrative and at times it flowed beautifully. They are an effective Championship side and Tony Mowbray has done well to fashion such a good team from the rubble of the dismal Strachan experiment.

Do we have a Plan C now that A and B have been seen to be ineffective? We face another set of strugglers on Saturday (albeit strugglers who can win tricky Capital One Cup ties) and it is very much to be hoped that something can be done to give us some spark, some push.

Gardner in midfield? Meyler involved somewhere? A place for McFadden? He must have sat on the bench last night and thought “Thank goodness I am only here until January”.

So, more doom and gloom and I have probably annoyed some of the readership. If the O’Neill experiment fails, I do not know where the club will go. We need to keep our nerve, nobody more than me. But I go to football to enjoy the experience and come out with a buzz. That has been absent this season.

The siren call of the Northern League is getting ever stronger.

Sunderland fans ahead of Tottenham Hotspur: In Arsene we trust