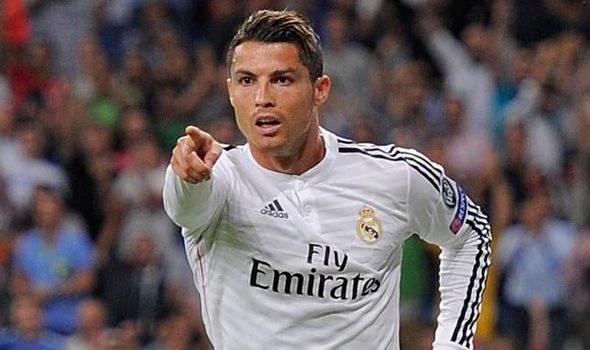 I am moving over there

All great players face the same barrier in their careers. Time. It usually robs them first of their most physical attributes. Pace, strength, fitness. But in very few cases – the mind.

For most, the mind remains razor sharp. For some it becomes even sharper. Examples include great players who go on to become great managers. The type of player who becomes an incredible thinker of the game and pushes boundaries and expectations on. Pep Guardiola’s reinvention of a decades old WW formation with a creative twist of the false 9. Johan Cruyff pioneered the three at the back formation with a midfield diamond of four innovated from Rinus Michels’ 4-3-3. And this season, Zinedine Zidane at Real Madrid.

But it is not just players who develop into managers. It is also those players who mark themselves as great because of the depth of their reinvention in the later years of their careers.

Ryan Giggs started as a flying left winger, running at defenders with speed  to deliver a killer final ball. He developed into a pacey forward in the early 1990s when United were able to play Lee Sharpe and Andrei Kanchelskis in wide areas. As his career progressed though, time took its toll, Giggs moved into a deeper role. In the late 2000s he developed into a centre midfielder and playmaker, but still able to drift wide to exert maximum damage.

There was a strange feeling when watching Giggs. Even when he was 40 there could be a moment in a match where he would pick the ball up and dribble 50 yards and beat four men like he was 19 again. He did everything he could to maintain fitness and the condition of his body – but in Giggs’ twilight years his most potent weapon was his mind.

Ryan Giggs’ Class of 92 colleague, Paul Scholes, undertook a similar  reinvention. Marked at a young age as being smaller and weaker than other players, he relied heavily on his ability to think his way through matches.

He played as a centre forward in the early stages of his career and quite frequently as a second striker. He prospered as an attacking midfielder and making late runs into the box to score goals. But Scholes truly came into his own when he retreated away from goal and reinvented himself as a deep lying playmaker.

Gary Neville said that Scholes was the greatest player he ever played with because he had never seen someone able to control and dictate the tempo of a game so dominantly.

Lionel Messi has excelled as a winger, a false nine and traditional number ten. In whatever position he plays he has managed to maintain his incredible goalscoring record of 507 goals in 583 Barcelona matches.

He is a goal-assist machine, delivering 194 assists in those matches. He averages 0.87 goals per game and 1 assist every 3 games. Equating to 1.2 goals every match that he either scores or creates. He reads the game and is able to orchestrate the flow of play from an advanced position like no other.

As he ages, we might see Messi withdraw from his advanced position into an out and out midfielder and deep lying playmaker. Perhaps even reinventing the role in a way we have never seen before.

Cristiano Ronaldo is the most complete attack minded player on the planet. He started as a scrawny winger who frustrated teammates by insisting on attempting step overs at every opportunity. He went down too easily and rolled around unnecessarily.

But in his time at Manchester United he developed his passing and decision making. He became less selfish and more selfless for the team. His crossing and final ball became a glorious weapon for United.

He worked on finishing and shooting from distance with success attested by two 40 yard strikes in the Champions League against Arsenal and Porto. Then he invented a new and unique way of striking a free kick. The knuckleball.

He is able to score with either foot from any distance at any angle. His heading ability is supplemented by a leap and hang time rarely seen outside the NBA.

In recent seasons we have seen him develop his poaching and positional sense in and around the box. The first step to his mind becoming his greatest weapon. This season Ronaldo has withdrawn from the play to give more emphasis on the team. Letting them develop the play behind him whilst he eyes up weakness in the defence and pounces. Less involved in the build up and playmaking, covering less ground, taking on fewer players and instead loitering near the goal.

He is still able to drift wide and execute his dribbling ability. But we are now beginning to see the start of his evolution into a tactically astute out and out traditional number 9 striker.

Under the guidance of Zinedine Zidane and embracing the opportunity to rest for crucial matches, Ronaldo has scored when it has mattered most. The quarter finals against Bayern Munich, the semi against Atletico, and the final against Juventus. He is too easy to dislike but impossible to ignore.

We currently live in a world of footballing luxury where we are able to behold the genius of both Messi and Ronaldo. Many argue over who is the better of the two. It almost doesn’t matter.

They are absolutely the two greatest club footballers of all time. And together they are amongst the top five players of all time. Their rivalry has pushed them both to levels comparable to only Maradona and Pele.

The fact they both have played, and are still playing, at their peak now is an undisputed footballing luxury. They are incredible players and when they retire the game will take a downward turn for sure. For all we know the next great player of a similar calibre could be twenty years away. Perhaps not even born yet.

So whilst we have them, we should not forget to savour them.