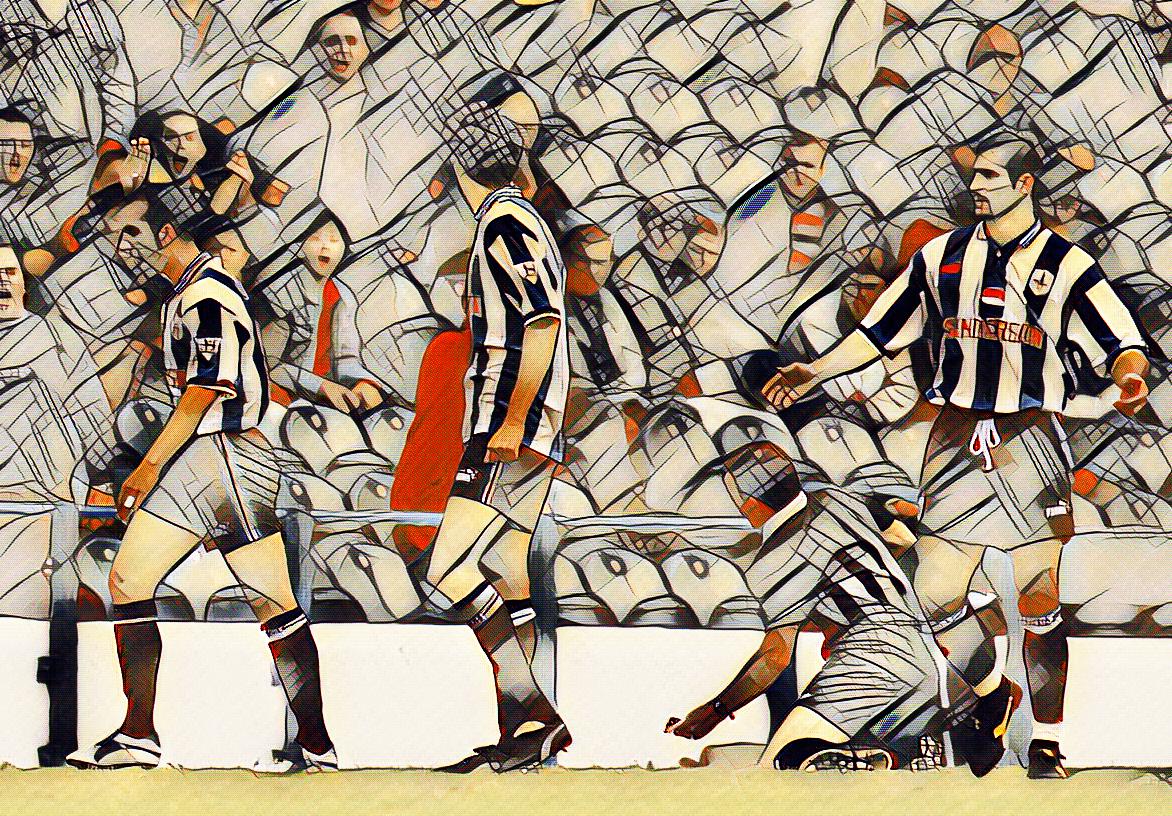 It is often said if you don’t notice a referee during a game then he’s had a good one. Well you couldn’t have said that about Paul Alcock one September afternoon in 1998.

Paul Alcock officiated in ninety-four Premier League matches between 1995 and 2000, yet everyone remembers him for just one. It became iconic. He must’ve felt a bit like Michael Fish. Fish was BBC weatherman for thirty years yet people always remember him for his “don’t wonder there’s no hurricane on the way” on the eve of one of the biggest storms to hit Britain for years.

Paul Alcock lost his battle against cancer this week as he passed away at the age of 64. After retiring at the statutory age of 47 he has worked tirelessly for charity and his local community.

This piece is to remember, with fondness, the moment which was shown around the world as Paul Alcock became the referee who was pushed to the ground, desperately trying to hang onto his self-respect. The villain of the peace was Paolo Di Canio who was playing for Sheffield Wednesday that day.

Wednesday were up against Arsenal at Hillsborough. Arsenal were the defending champions and the first half had been a fairly dour affair. As it drifted towards the break it suddenly flared up. Wednesday’s Dutch midfielder, Wim Jonk fouled Patrick Vieira by pulling him to the ground. Vieira immediately reacted by throwing him to the ground. Then all of a sudden a scuffle broke out. Di Canio decided to get his own back on Vieira, so pushed him.

Things turned ugly as Martin Keown then entered the fray, initially trying to calm matters down, which in itself seems a little far fetched. As he tried to separate the protagonists he caught Di Canio in the mouth with his arm. Di Canio returned the compliment with a kick to the Arsenal defender. Then he tried to gouge his eyes before other players separated them. Nigel Winterburn then joins in having run from quite a way away, which also seems unusual as he was never known to get stuck in. Arsenal during this period had been involved in several controversial incidents and Winterburn was not usually leading the charge ,else at the back hoping it would all have died down by the time he arrived.

For me, Winterburn is the real ‘star’ of this as his part is hugely comical. As he wades into the group trying to pick out Di Canio, he is full of verbals. But his role is one often seen in melees in town centres up and down the country. Once an offender is dragged away by the Police you often see previously meek individual, surrounded by comrades overcome by an immediate wave of bravery and they begin spouting off in full knowledge the offender cannot possibly react whilst they’re held back.

Di Canio is now lead away by his team mate, Petter Rudi, but you can see he is raging. Di Canio has form where this is concerned and the red mist has definitely descended.

This is where Alcock begins to bring about some semblance of order. He moves swiftly towards Di Canio and immediately brandishes a red card, pointing to the dressing room to complete the send-off. But Di Canio’s red mist won’t let go.

Di Canio is ranting away and then inexplicably pushes Alcock two handed in the chest. It was as if he was ranting in Italian and then realised Alcock couldn’t understand a word he was saying, then gave it the full teenager angst, “this is so unfair, I hate you!”, and petulantly pushed him before stomping off to his bedroom, slamming the door then reading his Beano comics. Or for younger readers, bashing out a game of GTA.

Alcock was a forty four year old man and although he was in better shape, physically, than his contemporaries twenty years before him, probably wasn’t as fit as referees are today. He was put in a position few ever expected to be in. Players just don’t push officials like that. Bet he wished he’d been a footballer. They’re so well trained at falling over, some can even do it without receiving any contact.

But Alcock said years later he was trying to stay on his feet, fearing making a fool of himself by falling to the ground. But instead we had the rather comical sight of him staggering backwards, whilst trying to stay upright and almost trying to go forwards, then ultimately losing the battle against gravity. If you’ve ever seen a new-born calf try and find it’s legs then you’re probably about there.

Once you reach forty you are mindful of doing real damage if you fall on your back, and what was probably making it harder for Alcock is he had his red card in one hand and his little black book in the other, so he couldn’t just put his hands out to break his fall. To his credit, and no doubt the pleasure of his employers, he kept his card and book safe from the dirt as he hit the ground. It was subsequently revealed Alcock recently returned from a spell away from the game recovering from a bad back so the last thing he would’ve wanted to do was damage that again.

It was a shocking moment and one few who saw it could really believe what they were seeing. It’s easy to chuckle at the sight of Alcock desperately trying to maintain some sort of self-respect or equilibrium, but if you were his family or friends you probably wouldn’t find it so funny.

Di Canio was marching off still ranting and raving, seemingly incensed at the injustice of it all. The fact he was the architect of his own downfall was presumably lost in the anger and fury which was pervading his every thought.

Di Canio never showed any remorse or sympathy for what happened to Alcock. After the match when told this had never happened before, he maintained it should’ve done as refs in this country make stupid decisions. He also maintained Alcock ‘dived as if looking for a penalty’ which again is an interesting way of defending an assault. In his autobiography he wrote “It wasn’t a violent gesture, it was a gesture of disappointment, that’s all it was. I could push my eight-year-old daughter, Ludovica that way and she wouldn’t fall over. It certainly looked bizarre. My first reaction was that somebody must have been crouching behind him, like in one of those old slapstick comedies”

But if you found the Alcock stagger amusing just grab yourself another bag of popcorn, top your drink up, dry your eyes and prepare yourself for some more slapstick.

Remember Nigel Winterburn? Well he followed Di Canio after the push trying to give him a menancing send off, but Di Canio was Dennis the Menace to Winterburn’s softy and turns to face his abuser. All of a sudden the brave, mouthy, cocky Winterburn cowers as if he’s suddenly seen a ghost. He’s changed from the snarling, feisty aggressor to a gibbering idiot meekly calling out “don’t hit me, don’t hit me”, in between the tears and the blubbering.

It was a scenario which has been acted out in playgrounds for many years, and in film and fiction. The linesman (yes they called them that back then) then stepped in between our brave hero, Winterburn and the nasty man, Di Canio, and with this protection the Arsenal full-back feels confident enough to deliver further instructions which no doubt he would’ve said when face to face with the Italian if he hadn’t been confronted with a sudden, and blood-curdling, “boo!”.

The commentary from Barry Davies is very telling. A man who commentated throughout the seventies, eighties and nineties was utterly compelling in his distaste of the proceedings. He ventured to suggest the Italian’s career in English football would now be at an end. It wasn’t, but his career at Wednesday was.

Still denying he had done anything wrong, Di Canio believed the club let him down by not backing him in his disciplinary proceedings. He received a £10,000 fine and an eleven match ban, three for the red card and eight for the push.

Only football could conjure up the idea Alcock was the villain of the peace. He had tv crews camped outside his door with even some suggesting he’d made a meal of the whole thing! The irony, eh?

Years later Alcock said in an interview that he had Bill Clinton to thank for getting him off the front pages of the newspapers as the whole “Monica Lewinsky affair” suddenly caught everyone’s attention.

Throughout this bizarre incident it’s easy to forget Keown got sent-off as well and Wednesday won the game with a late goal to give Arsenal their first defeat of the season.

You can also imagine the backlash around at the time. The Premier League was only a few years old and we had seen a flood of players from foreign shores come over. This incident was just three years after Cantona’s kung-fu kick on a fan at Selhurst Park and so the mood around some was as if all foreigners were not to be trusted and because we had opened the our borders then English football was reaping what it had sown. Nothing like this has happened again and possibly because Di Canio was a one-off. Poor Paul Alcock was an innocent party in the wrong place at the wrong time. He didn’t court the media, he didn’t hit the chat show circuit. He just quietly went about his business giving his services for the benefit of others.

Alcock received some wonderful tributes from others in the game after his untimely death. The Professional Game Match Officials Limited managing director, Mike Riley, said: “We knew that Paul had been ill for some time, but we are extremely saddened to hear of his passing.

“Paul enjoyed a distinguished career as a professional referee at the top level and was hugely respected by all involved in the game.

“More recently, Paul had been helping to develop the next generation of match officials as an observer, mentoring them during games. He will be sorely missed and our thoughts are with his family and friends.”