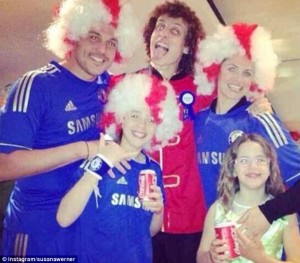 As if being relegated wasn’t painful enough for QPR fans, they had to endure the embarrassment of seeing their goalkeeper, Julio Cesar, wearing the shirt of their hated rivals Chelsea.

“I would like to clarify that last night I attended David Luiz’s fancy dress birthday party and as a joke for my friend, my family and I dressed as him,” Cesar said in a statement on QPR’s official website. “I want to assure everyone that absolutely no offence was intended.”

Whilst he may not have wanted to offend anyone, it is unlikely that QPR fans will be as forgiving as he hopes. The rivalry with Chelsea in West London was intensified after the FA found Chelsea captain, John Terry, guilty of racially abusing QPR defender, Anton Ferdinand. Their imminent relegation certainly won’t improve their mood either.

After winning 5 Serie A titles and the European Cup, amongst other trophies at Inter Milan, Cesar was a shock signing for QPR.

“I have many dreams at QPR,” he said upon joining the club. “To play well for the fans, the manager, the chairman and myself. And eventually finish in the top four and qualify for the Champions League and then one day win the Premier League. It is possible. A few years ago nobody believed Manchester City would ever win the Premier League. So we have to dream. When you dream, things can happen. That’s the reason I came here.”

QPR are currently bottom of the league, ten points away from safety, with four games left to play.

Chelsea Star Declares: “The Real Chelsea is Back”

Chelsea Star Absolutely Thrashed by Man Utd Legend: “I Would Kick Him up and Down”