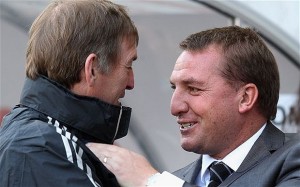 Rob Marrs: A top five finish, a Cup, playing some decent football and being on the back pages rather than the front. I’d say top four but we’ve fallen back over the last couple of years and all our competitors have strengthened (Arsenal with Cazorla, Chelsea with Hazard, Spurs with their new manager).

RM: Mixed. I’m happy with Borini and, to a lesser extent, Allen. Allen’s decent but the amount of money is a lot. I’m less happy that Aquilani has gone without ever getting an extended run and equally unhappy Maxi has left. If we keep Agger and Skrtel I’ll be very happy.

RM: Lucas Leiva. We missed him so much after he was injured last year – the midfield lost solidity and the centre-backs were less well protected. If he comes back fully fit, we’ll be a lot better off.

RM: I like his philosophy and I like his manner. I just want him to be given time to mould an ethos, philosophy and style. Even if he has a bad season next year we need to stick with someone – I hate the fact that we’ve become one of those clubs that sack a manager every season.