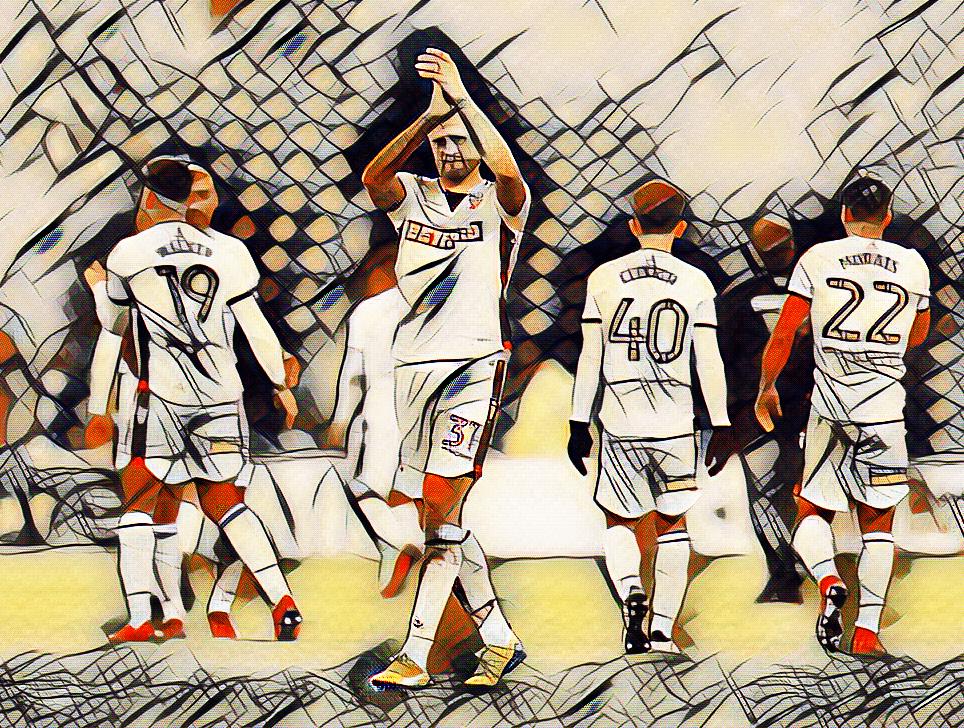 “Cold feet under a warm blanket, steam over an empty mug-rain splatters on dry window pane-open journals of closed memories… tears of laughter and joy of pain… schmaltz of diametric morning.” – Val Uchendu

Have you ever visited somewhere where the expectation is remarkably different from that of which you yourself experience? Perhaps attending a restaurant when your friends have warned you off for fear of poor service or inedible food? Or having little expectation of the latest rom-com, only to find yourself rolling around the aisle and clutching your stomach in pain from roaring with laughter? Stepping into a modest and affordable car, only to realise that it’s one you were looking for all along?

Bolton Wanderers training ground is much the same. You expect the atmosphere to be one of trepidation, miserable and worried. Far from it, as it turns out. The league table doesn’t lie is what older gentlemen say, sat at their regular table in their weekend boozer dressed in a full suit. They are, of course, correct. At the end of the season the league table mostly does illuminate where a team deserve to finish. It’s the reason why Leicester City can call themselves Premier League Champions and why the likes of Portsmouth, even Blackpool were forced to rebuild from League Two.

The Championship table does not make for decent reading if you are a Bolton Wanderers supporter, many of whom will attend this season’s Gentry Day against local rivals Preston North End on Saturday 3rd March. Bolton find themselves in nineteenth place, which doesn’t sound all too alarming but they are just two points clear of Barnsley in the final relegation place.

Nor, it has to be said, does the fixture and results list make for positive reading. Bolton have managed to string together two successive victories only once during this season, against Sheffield United and Hull City at the turn of the year. Their recent form does at least bring a pleasing similarity of L-D-W-D-L.

This is a Bolton team shorn of its most significant attacking asset. Whatever your personal thoughts might be about Gary Madine, his commitment and application to the Wanderers cause has never been in question. Arguably one-dimensional, the team played to his strengths and he contributed 10 goals this campaign. Now a Cardiff City player, he will benefit from a team who leads the charts in crosses.

With all that combined, you’d think there would be a lack of optimism in the air but this isn’t the case. Only the cold snap of February in contrast to a bright blue Lancashire sky serves as a reminder that there is more to the current climate at this proud football club than winter woes.

Players come off training pitches smiling, in groups and not isolated. Sharing jokes with each other and the media staff around them while signing programmes for competition winners. Assistant manager Steve Parkin is a realist, as you’d expect from a man who has spent the last six years plus either in Yorkshire at Bradford or in Lancashire with Bolton, both times under Phil Parkinson.

After looking at the next game against QPR today at Loftus Road and highlighting the threat of 6-foot-6 Matt Smith for his presence in both boxes, something Steve Parkin did talk about extensively was about life being back in the Championship.

Ironically I spent the first press conference of the season at Leeds United’s Thorp Arch training ground and then-manager Thomas Christiansen was quick to point out that there would be a positive feeling around Bolton having come up in successful fashion from League One but that didn’t materialise as Bolton found life very hard back in the Championship, not picking up a league win until the middle of October with a relieving 2 – 1 triumph over Sheffield Wednesday at the Macron Stadium. At that point Bolton had amassed just five points. They now sit on 30 but their away form remains an issue with only one win out of forty at Championship level.

Parkin talked of the differences between the two leagues, having extensively spent time in League One with Bolton and Bradford City.

“The change is massive, the strength in depth of squads, the money that teams have spent and can spend in terms of wages and transfer fees is a million miles away from League One. The football, certain teams are very capable of playing tremendous football, we witnessed Fulham at our place last week, but there’s also a real physicality and a size to teams. The key thing we had to get across to the players after the poor start was ‘look lads, not only are we coming into a better division technically, but physically it is bigger, quicker, stronger than Div One.’”

Some of the players who wear the Whites’ shirt have been in the Championship before. David Wheater, Josh Vela, Derik Osede, Darren Pratley, Karl Henry and Adam le Fondre all stand out as players who have not only played in but excelled at Championship level. They have been joined by the likes of Reece Burke, Jon Flanagan and Harry Charsley who have Premier League ability, just not the game time to show for it. Flanagan particularly you’d feel is playing beneath his level and should demonstrate what he’s capable of after getting up to speed, with hopefully his personal problems well behind him.

Parkin’s sincere appraisal of the league and Bolton’s position is pleasing to hear, given that it’s better to be cleverer than you look, rather than looking cleverer than you are. Nobody would want to hear someone unexpecting or unsympathetic of the situation Bolton are in.

“It’s a tough division. There’s teams down there fighting it out with us who have been Premier League teams. We embrace the challenge but there’s no doubt there’s a massive difference between the two divisions. Unfortunately, we didn’t have a very good start but the lads have rallied nicely and there’s a good spirit about the group. The way the fans got behind us in the Fulham game was so helpful and so encouraging. We want to be in this league, it’s so difficult to compete but we want to compete in it next year.”

Both Steve Parkin and Phil Parkinson appeared to be very aware, yet positive about Bolton’s future. The current position is not unexpected and motivation will be important moving forward. Bolton’s immediate future is a huge week in their season as they face QPR at Loftus Road, Sunderland at the Macron Stadium and Norwich at Carrow Road all before welcoming local rivals Preston North End early in March.

“Loss is like a wind, it either carries you to a new destination or it traps you in an ocean of stagnation. You must quickly learn how to navigate the sail, for stagnation is death.” – Val Uchendu

Certainly, after meeting Steve Parkin, there’s a sense that Bolton’s squad are indeed being taught how to navigate the sail for the purpose remaining in the Championship for another season.