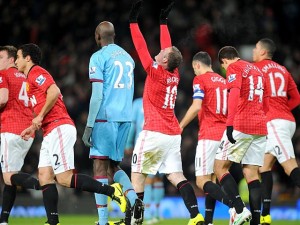 1. Having struggled in the FA Cup in recent years, Sir Alex Ferguson has made it clear that he now wants to get his hands back on that trophy, and as such, he kept his word and fielded a relatively strong side which looked like it could cause West Ham all sorts of trouble, even with the likes of Robin van Persie, Patrice Evra and Michael Carrick all absent from the starting XI. It’s nice to see the gaffer taking the cup so seriously considering just how long we’ve gone without winning the competition now, regardless of how low it is in how priority list.

2. After the teams had been announced, I was excited to see Nani, Anderson and Wayne Rooney all starting after their recent absences due to injury. All three players are fantastic footballers who have a lot to offer the team and seeing them getting valuable game-time under their belt can prove to be beneficial to us in the long run when you take into account some of the games we have coming up, including our next round in the cup against Fulham and of course our two fixtures against Real Madrid.

3. Ryan Giggs once again reminded the world that he is still among the best in our league when it comes threading a football through a defence. It’s fair to say that the 39 year old started off poorly with him giving away the ball cheaply rather than holding onto possession. As the game grew and he found his feet, Giggs started to dictate play and show his real worth to the team, especially in the second half where his teammates looked disinterested and left it up to the veteran to try and make something happen, which he did. His excellent weaving run took him past four challenges and into the box where his cross hit a hand and won us a penalty.

4. Speaking of penalties, Wayne Rooney has now taken 26 penalties and has only converted 17 of those, taking his average conversion rate to 65%. As good a footballer as he is, it has now become abundantly clear that taking penalties are not his strong point. What makes it all the more baffling is why he is still allowed to take them given the other players on the pitch who have better conversion rates, in today’s case, Ryan Giggs. When Wazza steps up to take those penalties, there is always a little part of me that thinks he is going to miss. I’d much rather see penalty duties handed out to Robin van Persie from now on.

5. With Robin not featuring today, and given just how clinical we’ve become from set-pieces ever since the Dutchman started taking them, it was interesting to see how our side would cope without him on the field. Well, ‘poorly’ is the answer to that one. Whenever we had a corner or a freekick, we looked to play it short instead of whipping the ball into the danger zone, and when we did hit it directly into the box, our crosses looked tame and barely troubled the first defender. An all too chilling remainder of last season.

6. After rumours started circulating online that Nemanja Vidic had picked up yet another injury to his knee, I was looking forward to seeing how young Chris Smalling will cope when leading the defensive line against a strong and physical West Ham strike force. The youngster did magnificently well to shrug off any challenges with minimal ease whilst holding together a vastly inexperienced defensive line-up. It was nice to see how far he’s come after ‘that’ night at Upton Park a few years ago. Regardless, rumours of an injury to Vidic have been quashed by the manager and so hopefully we’ll see the Serb return to the starting line-up against Spurs.

7. Although I wanted Welbeck to be starting today and hopefully see him grab a much needed goal to boost his confidence, Hernandez more than made up for my disappointment with a magnificent performance which saw him involved in nearly every single attack that we created. Yes, he was offside a tad too often for my liking but even then, he was impressive off and on the ball and looks twice the player he was last season. His overall play has improved dramatically as well, with him now bagging two assists in two consecutive starts.

8. We’ve often been labelled a one-man team this season and it was interesting to see how we’d cope today without that certain ‘man’ on the field. ‘Not very well’ is the answer. I am of course referring to Michael Carrick who had to come on in the second half and help turn the tide back into United’s favour. People are quick to pick up on Robin van Persie’s goals and assists and this often leads to them overlooking the influence Carrick has on our matches. It was disappointing to see how fragile our midfield looked without its main anchor holding the team together.

9. Keeping possession can be crucial when your team is on the back-foot, so it was extremely annoying to see how often Lindegaard gave the ball away with a sloppy kick out from the back. His distribution is embarrassing when you compare it to De Gea, and adds to a growing list of reasons as to why the Spaniard should be our starting ‘keeper rather than the Danish international. I have nothing against Lindegaard and am more than happy to see him feature in our domestic games and the odd league match but seeing him start in the big games ahead of David De Gea makes no sense to me whatsoever.

10. On a more positive note, I’m very glad to see our squad rotation pay off with a victory against a strong Premier League side. Yes, we played pretty poorly and looked vulnerable at times but even then, we were playing a good team and all that matters now is that we’re through to the next round whilst also giving various members of our first team an opportunity to rest before our big away game on Sunday. Let’s forget about this game for now and concentrate on our upcoming fixtures, some of which will almost certainly define our season. Come on United!