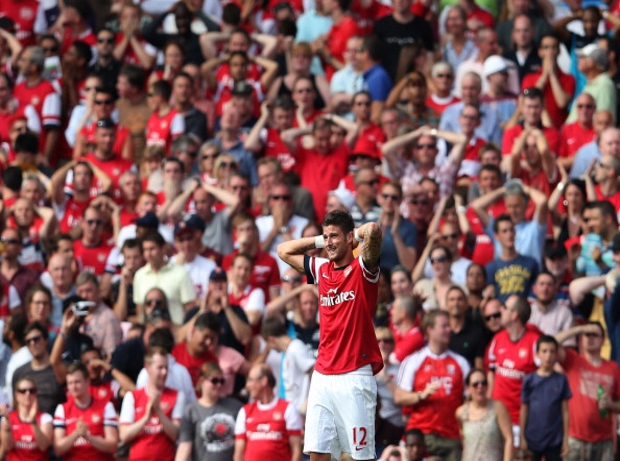 Pete Sixsmith risked the vagaries of an early morning shower and an irate cat to meet up with his old friends Rupert and Monty at Ashburton Grove. The Durham Branch of the Sunderland Supporters’ Association parked up the bus in north London and according to the pundits the team did the same. But after a somewhat disappointing lack of activity in the transfer market, there was much on show to make the long journey back less pessimistic than it might have been. There is surely more to come before the window is slammed shut but for now Pete applauds the effort of those who turned out at the Emirates and celebrates a point won.

The alarm goes at 5am. The cat looks disgusted at being woken up and isn’t all that keen on being fed at such an early hour.

The shower grumbles away and breakfast is eaten quickly, not the leisurely experience we retirees usually enjoy.

Outside, a fine morning becomes the customary rainfest. The papers have just arrived at the shop. Sobs is ready and waiting. Ronnie appears from behind a bush. The deadly Thinford roundabout is negotiated and the coach arrives 10 minutes late. We are wet.

Good mornings are said, enquiries are made about health over the summer and the whereabouts of missing comrades. The weather improves, papers are read, the evergreen Brian Matthew hosts Sounds Of The Sixties.

At Tibshelf Services there is a sad little vignette, as the Vehicle And Services Operators Agency pull over a coachload of pensioners and order their battered V reg coach off the road, depriving the passengers (none of whom look healthy or in the first flush of Grey Pantherdom) of their trip to Weymouth.

London is hit in the late morning, Oyster Cards are flourished at Holloway Road and at Russell Square and the first pint in The Lamb is sliding down by 12.15. Wood Major and Wood Minor are there and Bob Chapman joins us.

The season is under way – Ha’way The Lads!!!

Ashburton Grove was basking in glorious sunshine as the game started. MON went for a line up that was there to contain the RVPless Gunners and hopefully catch them on the break.

Sessegnon played on his own up front with a brief to bring McClean, Campbell, Larsson and Colback into the game. This he did most effectively in the first half. He is a very special player and we can only hope that he stays with us. His ability to kill a ball is better than that of any player I have seen in a red and white striped shirt.

The back four looked solid, with Cuellar and O’Shea showing composure in the centre. This centre half pairing looks very good indeed. They are similar players, both thinkers and both players who seek to preserve energy by reading a game. Michael Turner, for all his ruggedness, could not do that and it looks on the evidence of the opening day (Turner had a stinker for Norwich at Fulham) as if MON has signed a better centre half and made £1.5m profit in the process.

Gardner and Richardson, not natural defenders, also did well as our two “stop gap” full backs, helped by Campbell and McClean, who covered and dropped in whenever they went forward. McClean forced a good save from the keeper and Campbell was always willing to take on defenders.

Cattermole roamed the midfield with a tackle here, an interception there, here a block, there a block, everywhere a pass, pass – and he did it without once incurring the wrath of the excellent Chris Foy, or the permanently unhappy Wenger. He was aided by Colback who got forward whenever he could and who should maybe have scored in the first half when a better shot would have probably beaten Szczesny.

The second half was a combination of good, solid defending and predictable approach play by the home team. There were a couple of hairy moments and it was a relief to see Giroud bring back memories of poor old Lillian Laslandes when he blasted wide from 12 yards.

It was a well thought out tactical plan from MON, well executed by the players who knew exactly what their roles were and stuck assiduously to their tasks.

It highlighted the difference between this manager and the previous one. Had our Geordie Martyr gone into a game with this approach, the players would have been unsure of what to do and how to do it. They would have drifted away from their positions. The self discipline would have been lacking and gaps would have appeared.

Under MON, players believe they can perform a task. Instructions are followed. Cattermole does not jump into tackles, Sessegnon brings other players into the game and Larsson does not drift wide. This all contributed to the fact that the longer the game went on, the harder Arsenal found it to find a way through.

The use of substitutes also played a big part in the point. Bruce was hopeless at putting the right man on at the right time. MON was spot on yesterday.

Saha looked bright and sharp and tied up Mertesacker and Vermaelen when they may have been thinking of pushing forward. Elmohamady had a couple of bright runs down the flank and the sheer energy of Meyler picked us up in midfield when legs began to tire.

The post match “analysis” on radio and TV was all about how Monty and Rupert and their chums needed to be patient while the new Arsenal team came together. There was little if anything said about the prodigious effort that our team had put into the game or how MON had been the tactical equal of Wenger, who even called us Leicester in one interview.

The trip back was comfortable and I read a rather spiffing biography of Terry-Thomas, the louche star of the 50s and 60s. One of his key phrases, used in Private’s Progress and I’m All Right Jack, and used to describe what he saw as shirkers, was “what an absolute shower”. No one could say that about the 14 who ran their hearts out for MON and SAFC on Saturday.

A good start to my own Season 50 – now for that first goal.