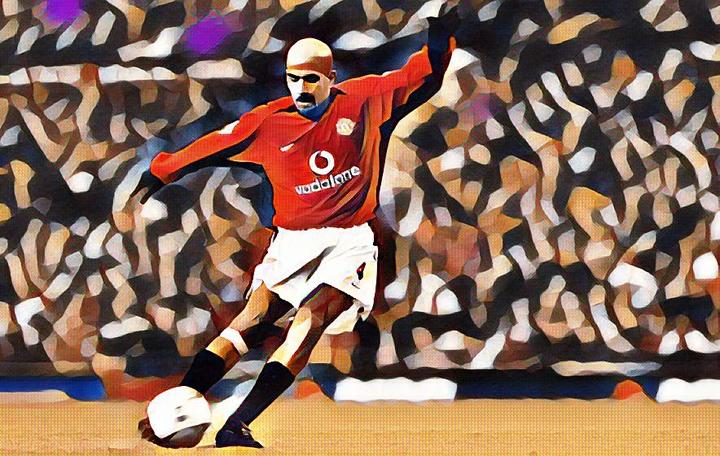 On 8 December 2001 Manchester United lost at home to West Ham United, their third successive defeat and sixth of the season so far. The team that had won the last three Premier League titles was on shaky ground, and one of the scapegoats was Juan Sebastián Verón. The Argentine midfielder had signed for a record £28.1 million from Lazio just a few months earlier, and when he didn’t dominate games as expected question marks began to be raised. Captain Roy Keane, not one to suffer fools gladly, backed up Verón as well as under fire Frenchman Laurent Blanc. “Great world-class players couldn’t cope with the muck and bullets? Rubbish,” wrote Keane in his 2002 autobiography. “Laurent and Seba are superb professionals, hard enough, more than good enough for the hurly-burly of English football.” Unfortunately, despite his undoubted gift Verón would fail to come to grips with English football during a three-year spell in which he represented Manchester United and Chelsea.

Verón debuted with Club Estudiantes de La Plata as an 18-year-old in 1993, helping his hometown club to the Primera B Nacional title and promotion to the top flight in 1995. A year at La Bombonera with Boca Juniors – playing alongside the likes of Diego Maradona and Claudio Cannigia – followed before the inevitable transfer to Europe.

Verón spent the next five years in Serie A – at the time arguably the toughest, most prestigious, and lucrative league in the world. A year with Parma was sandwiched in between two-year stints with Sampdoria and Lazio, and the trophy haul included a Coppa Italia, UEFA Cup, and Italian Super Cup. The icing on the cake was the 2000 Scudetto with Lazio, where Verón was a real driving force from midfield in Sven-Göran Eriksson’s side.

In March 2000, months before Lazio wrapped up the league title, Verón was one of many South American players to be implicated in the Italian Passport Scandal, accused of using false documents to obtain an EU passport in an attempt to circumvent rules regarding foreigners. More than a dozen players were ultimately banned, with their clubs fined a combined figure that almost reached £1 million, yet Verón was cleared in June 2001, paving the way for his move to Manchester United.

Verón’s new club had just completed a hat-trick of league titles and it was felt the capture of the Argentine star would take them to a new level, especially in Europe. His first goal in a red shirt came on 8 September when visitors Everton were on the receiving end of a 4-1 thumping. Verón, wearing the number four shirt, started the move himself from deep before playing a one-two with Roy Keane on the edge of the box, controlling the return pass on his chest and sublimely half-volleying the ball into the bottom corner. It was a piece of magic from La Brujita (The Little Witch), who deservedly inherited the diminutive of his father’s nickname.

A shell-shocked United visited White Hart Lane on 29 September and found themselves 3-0 down at halftime. The trademark hairdryer treatment from Ferguson produced a response from his players, who scored five second-half goals in one of the Premier League-era’s most dramatic comebacks. Verón scored the fourth goal, taking a pass from Ole Gunnar Solskjaer and drilling it across the goalkeeper into the far corner from the edge of the penalty area to leave Tottenham Hotspur red-faced.

Verón scored his fourth goal in six weeks on 20 October with a superb free-kick, albeit in a home defeat to Bolton Wanderers. It was a good goalscoring return from a foreign import adapting to English football but by the time the sixth league defeat of the season came at the hands of West Ham in December talk of a crisis was in full swing. Although United’s form picked up somewhat in the second half of the season, Arsenal relieved them of their league title as United finished third, ten points behind the eventual champions and a position below rivals Liverpool.

Playing a more conservative 4-5-1 formation, United reached the semi-finals of the Champions League but were eliminated by the razor-thin margin of away goals at the hands of German side Bayer Leverkusen. Keane described the criticism of Verón over the course of the season as “desperately unfair,” describing him as a “world-class midfield player.” Keane’s support for the Argentine meant that others were in his crosshairs, with unnamed teammates accused of revelling too much in the glory and “believing the publicity.”

Alex Ferguson also supported his costly signing and echoed the words of his captain, storming out of a press conference on the eve of the penultimate game of the season, when the new Champions Arsenal were due to visit Old Trafford. Ferguson insinuated that the criticism began when Argentina were drawn against England ahead of the 2002 World Cup, with bitterness over the Falklands War still prevalent despite two decades passing since. “He is a fucking great player,” snapped Ferguson, “and you’re all fucking idiots.”

After 16 games of the 2002/03 league campaign United found themselves languishing in fourth position, six points behind reigning champions Arsenal who were the visitors on matchday 17. In what looked like a makeshift midfield partnership, Verón was partnered by Phil Neville who was more accustomed to occupying either fullback role. Neville was imperious, doggedly refusing to let Patrick Vieira get a foothold in the game, and the much-maligned Verón gave United the lead after just 20 mins. Paul Scholes hit the by-line and dragged the ball back to the Argentine who finished with the outside of his right foot from just a few yards out. The provider turned goalscorer with 72 minutes on the clock as Scholes sealed the points for United in what amounted to a crucial three points.

Verón’s best form came in the Champions League, where he scored four goals in the first group phase. It was all to be in vain as United were knocked out in the quarter-finals by Real Madrid, with Ronaldo’s hat-trick ultimately proving the difference. A League Cup final defeat to fiercest rivals Liverpool in Cardiff’s Millenium Stadium was offset by the triumph of regaining the Premier League trophy, presented after an away win at Everton’s Goodison Park on the final day of the season. Despite being an unused substitute Verón was in the midst of the celebrations, proudly wearing the winners’ medal around his neck after him and his teammates finished five points clear of Arsenal. It would be the last time he wore the red shirt of Manchester United.

Almost 15 years later how can Verón’s time with Manchester United be summarised? It was hoped that he could bring more control to the midfield, especially in Europe, and although United failed to add to their two European Cups they were stopped in their tracks by away goals in 2001/02 and an imperious Real Madrid the following season. Almost one-third of his 75 appearances during the two-year spell at Old Trafford came in Europe, which shows he was more trusted with, and suited to, the more tactical and slower pace of continental games. His scoring rate of one in six in Europe was better than the one in 7.3 he recorded in domestic games which further backs up these claims.

In 2007 The Times named him in the top 50 worst transfers, which is incredibly harsh. He failed to produce on a consistent basis but produced moments of utter brilliance, and was part of a side that regained their title in a thrilling campaign in 2002/03. In 2014’s Second Half, Roy Keane’s sophomore autobiography, he offered further support for a player he always backed during their time playing together. “It didn’t quite happen for him but, technically, he was a very good player. Maybe English football just didn’t suit his style of play.”

Although he wanted to continue at Old Trafford Alex Ferguson informed him that he was willing to accept offers and cut his losses. Chelsea, who effectively won the lottery when Russian billionaire Roman Abramovich bought the club in 2003, offered £15 million for the midfielder which – despite being half of what United paid Lazio two years prior – was accepted. With Italian Claudio Ranieri in the Stamford Bridge dugout, Verón’s time with Chelsea couldn’t have gotten off to a better start. A goalscoring debut in a 2-1 opening day victory over Liverpool at Anfield was, sadly, the highlight for Verón with injury restricting him to just 14 starts all season.

Still technically on the books with the Stamford Bridge outfit, Verón spent the following two seasons on loan at Internazionale, where he added one league title – albeit retrospectively after Juventus were embroiled in a match-fixing scandal – a Coppa Italia, and an Italian Super Cup to his medal collection.

The final season of his four-year Chelsea contract saw a loan spell back to his boyhood club Estudiantes, a career path trodden by many a South American star. The loanee helped Estudiantes to the league title after a playoff victory against another former employer, Boca Juniors. The move was made permanent in 2007 and the next three years were particularly sweet for the then 32-year-old who enjoyed an Indian Summer of epic proportions.

In 2008 and 2009 Verón was named South American Footballer of the Year as Estudiantes won the Copa Libertadores in 2009, the fourth in their history, and a further league title in 2010. Even Pep Guardiola’s all-conquering Barcelona side needed extra-time and a Lionel Messi goal to lift the 2009 FIFA Club World Cup at the expense of Estudiantes. By winning the Copa Libertadores with Estudiantes Verón followed in his father’s footsteps, leading manager Alejandro Sabella to boldly label Verón junior as “the most important player in the history of Estudiantes.”

In October 2014 Verón emerged triumphant in the Estudiantes presidential election, winning over 70 per cent of the votes, solidifying his place in the pantheon of club greats. The president bizarrely came out of retirement in December 2016, splitting his time between the boardroom and training ground. Signing an 18-month contract, Verón saved himself for the Copa Libertadores, and although he expectedly struggled physically given his advancing years, he still displayed the superb technique that was a hallmark of his peak.

Verón scored nine goals in 73 appearances for the Argentina national team and featured in three World Cups for La Albiceleste. His class is undoubted, and his trophy haul, as well as individual awards, attest to that. He never really settled in Europe, representing six clubs over the course of a decade, and his time in England failed to deliver the consistent, brilliant performances football fans expected. However, to fans of Estudiantes he will always be considered one of the biggest legends in their history.